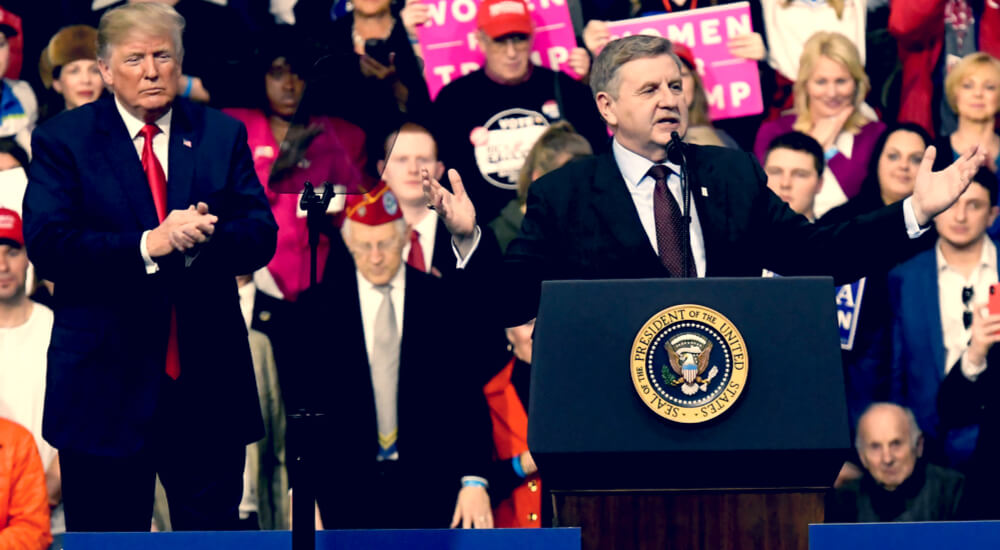 As y’all know, my wife Mary and I have been on the road with Conservative Campaign Committee working to elect Rick Saccone for Congress in Pennsylvania. In response to our final Facebook push to get out the vote, some conservatives/Republicans said they hoped Saccone would lose because they still hate Trump.

I pray that God will open these patriot’s eyes to see the big picture. Our country as founded was teetering on the edge of destruction. God in His mercy stopped us from falling over the cliff into socialist/progressive Hell by allowing Trump to miraculously win the presidency. 1 Corinthians 1:27 says, “But God hath chosen the foolish things of the world to confound the wise;”

I caught video clips of Trump’s rally in Pennsylvania for Rick Saccone. Folks, I chuckled listening to President Trump speak to the massive crowd as if he were speaking with family and friends in his living room. Trump’s down-to-earth language and demeanor has political consultants and elites pulling their hair out, yelling, “This is not how a president should speak and behave!” And yet, this is the Trump millions fell in love with on the campaign trail.

A gentleman sent me an email with an attitude I believe is widely shared. He wrote, “Trump can be a butt-head sometimes, but I don’t care!” In other words, this gentleman is elated by all the great things Trump is doing for our country.

My wife Mary and I traveled the country passionately campaigning for Ted Cruz for president. After Cruz dropped out, we hopped aboard the Trump train only because wicked crooked Hillary would have been disastrous for America. I think brother Ted would be awesome on the Supreme Court.

I have come to realize that God in His divine wisdom, anointed Trump for such a time as this. Folks, Trump has moved our Conservative agenda light-years beyond what any other Republican could have done in only one year; 81 major Trump achievements –11 Obama tyrannies repealed. http://washex.am/2tPhaZc

My focus is on being grateful to God for bringing our country back from the edge of destruction rather than focusing on the flaws of His chosen vessel. Moses was a murderer. David sent a man to his death in order to steal his wife. Paul got his start persecuting Christians. Surprisingly, Trump has a more Conservative track record than Ronald Reagan in his first year. http://washex.am/2Ioz3RS

Trump’s election and swift reversals of Obama’s transforming us into an anti-Christian http://bit.ly/2plTsy0 socialist/progressive nation has panicked and infuriated Leftists. Trump’s fearless fighting for America has forced Leftists to take off their deceitful masks, exposing them as the America-hating-zealots they truly are.

No longer is Leftist fake news media attempting any pretense of fair and balanced coverage of the Trump Administration. From mock beheading Trump http://bit.ly/2rRKexh to shooting Trump in the head in a music video http://bit.ly/2mkriBk to threatening to blow up the White House http://bit.ly/2FJDTux, Leftists are clearly sending their fellow Trump and America hating minions the message that nothing is off the table in their quest to get rid of Trump — preventing Trump from prospering America, halting Obama’s transformation and restoring freedoms hijacked by Obama.

These same Leftists boldly generating violence against Trump demonized the dignified, patriotic and peaceful grandparents and families with children who attended Tea Parties; branding them racist haters threatening our democracy.

Despite Trump’s remarkable progress, we still have a very long way to go in restoring traditional Godly principles and values, which have made America great. Trump has only just begun.

For decades, Democrats’ socialist-progressive parasitic tapeworms have been allowed to embed themselves into the bowels of America — consuming all nutrients, only leaving foul-smelling cultural and economic excrement.

These people on the left are insane with hatred for our country. They will never give up or surrender, fighting with their last breath to bring down America. I cannot understand anyone who claims to love America not rallying behind our only present hope of restoring our Founding Father’s vision of America. Let’s please come together for our country.