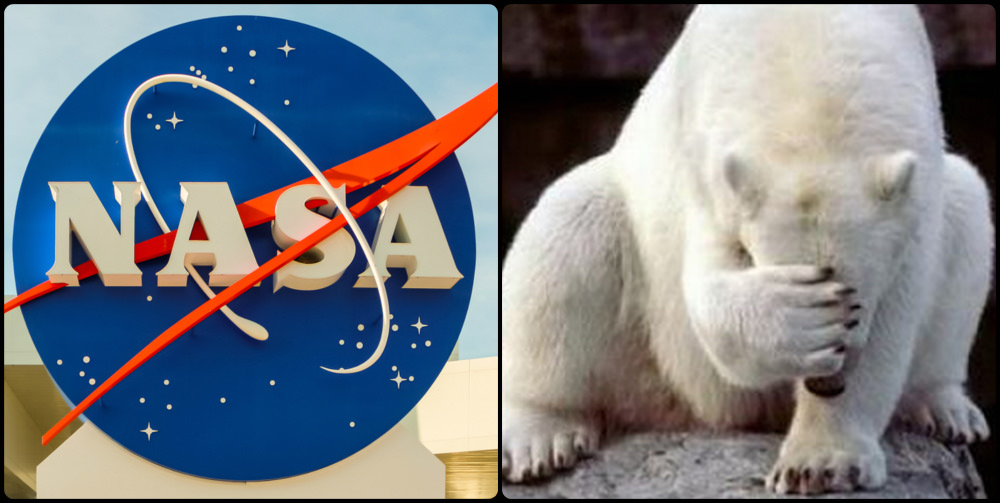 NASA says the planet was hotter than September 2014 by 0.004 degrees Celcius. June 2016 figures have been downgraded to third warmest ever, but they omit that they are only reporting on records post 2000, i.e. “in this century” which somehow morphed into “in history.”

“This makes it the 11th of last 12 months to break temperature records so Federal meteorologists say Earth’s 16-month streak of record high temperatures is finally over.”  But why have we been reading about the 18 year decline and how many of said records were for lower-than-normal temperatures?

“The National Oceanic and Atmospheric Administration says last month’s 60.6 degrees F (15.9 Celsius) was merely the second hottest September on record for the globe.”  Why do so many references say the 1930’s decade was the hottest on record?

“However NASA, which averages global temperature differently, considers last month as record hot.”  They measure them differently OK.  They have been caught several times faking the data.

“That’s slightly cooler than the September record set last year. But it was warmer than the 20th century average. NOAA climate scientist Jessica Blunden says a lack of a record doesn’t reflect an end to global warming.”  Jessica dear, if there were an end to global warming you would be unemployed.  Could that have anything to do with it?   Do you have any idea of how many Ph.D.s this is keeping employed?  “Climate change” is a full employment program for Ph.D. scientists of all kinds.

“Natural variability means not every month sets records, but the space agency’s list doesn’t have the same big hot streak. It didn’t consider June as record hot. Records go back to 1880.”  But you ignore the 1930’s decade and 1934 as the hottest year on record.

Jessica, the natural variability you note is more in your method than in the variations of nature.  Never forget that temperature is not a physical quantity, but a measure of molecular activity and very much subject to the “wobbles” of nature.

“According to NASA’s calculations, September 2016’s temperature was a razor-thin 0.004 degrees Celsius warmer than the previous warmest September in 2014.  The record-warm September means 11 of the past 12 consecutive months dating back to October 2015 have set new monthly high-temperature records.”

Madame: Where the thermometers you use have their finest graduations in degrees and it is standard practice to limit their reportable accuracy to 0.2 Celsius degree, how do you come up with 0.004 Celsius degree?  You are claiming 50 times the accuracy possible.  That leaps from the page for any scientist.

“The monthly analysis by the GISS team is assembled from publicly available data acquired by about 6,300 meteorological stations around the world, ship and buoy-based instruments measuring sea surface temperature, and Antarctic research stations.”

Yes, you people are notorious for picking station sets that give you what you want.  One had a fast-food restaurant start-up next to it and the heat exhaust from the hamburger grills were aimed at your temperature recording station.  That is not only a big “Whopper.”  It made your chart until found out by a “denier” you would put in jail.

“The modern global temperature record begins around 1880 because previous observations didn’t cover enough of the planet to be representative statistically. Monthly analyses are updated when additional data become available, and the results are subject to change.”  Madame: They certainly are and you have been changing them to your, and Mr. Obama’s, liking, but gotten caught every time!

“Updates to the input data have meant that June 2016, previously reported to have been the warmest June on record, was in GISS’s updated analysis, the third warmest June behind 2015 and 1998 after receiving additional temperature readings from Antarctica.”   Madame: We do not think so as 1934 beat any year we know as the all-time recorded record was set in July of 1934 and GISS, Jim Hansens old bureau before he retired with his millions in awards, grants, fees, commissions and royalties, has been caught several times faking data.  Most recently that from their Peruvian station.

“The late reports lowered the June 2016 anomaly by 0.05 degrees Celsius to 0.75. Monthly rankings are sensitive to updates in the record, and our latest update to mid-winter readings from the South Pole has changed the ranking for June,” said GISS director Gavin Schmidt, and continuing. We continue to stress that while monthly rankings are newsworthy, they are not nearly as important as long-term trends. Just weeks ago August tied July as the hottest month ever recorded, keeping up an alarming trend that has seen eleven consecutive months of record-breaking temperatures.”  Madame: This is simply not true.  1934 set all such records.

“The researchers have created a new visualization to show how dramatically the temperatures have climbed since scientists began tracking this data, revealing a long-term warming trend over the past century.”  Yes and many of those records have been doctored as has been shown by several independent meteorologists.

A new NASA study has revealed the dangers of climate change are already affecting humanity and led to the death of hundreds of people across Europe sixteen years ago.

“A heatwave in 2003 killed 506 people in Paris and 315 in London, experts have said in a new study. A fifth of those deaths can be blamed on man-made pollution. The study led by University of Oxford scientists said there were 315 heat-related deaths in London as Europe experienced its hottest summer on record, out of which 64 were caused by climate change.”

We can only wonder how many deaths were caused by “climate un-change.”  How many died of Temperature Boredom Syndrome, TBS, for which there is no known TV commercial cure or nostrum. In fact most of those people probably would have died whatever was happening to the thermometer.

“The study was the first to calculate the number of premature deaths, link to air pollution and warned heatwaves will become more common and more severe in the future due to the activities of man.” We also wonder how many generations will pass before people look back on our TV medication commercials with the same disdain we had for “snake oil” salesmen in movies set in 19th century. With all the cautions including “…thoughts of suicide” who would ever want to take any of that junk?

“The graph reveals the temperature anomalies dating all the way back to 1880, when the global temperature record began. This past August marks the hottest month in 136 years of observation.”  Not true as the real data show: 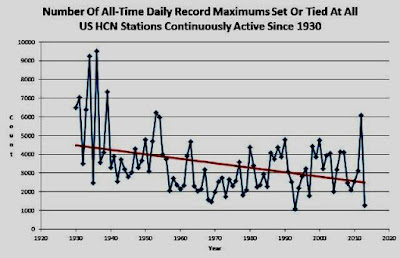 “Monthly rankings, which vary by only a few hundredths of a degree, are inherently fragile,’ says Gavin Schmidt, director at the NASA’s Goddard Institute for Space Studies.

We stress that the long-term trends are the most important for understanding the ongoing changes that are affecting our planet. Seasonal temperatures usually reach their highest in July, the researchers explain, but this year, August was so warm that the two months tied, with last month being 0.98°C warmer than the mean August temperatures from 1951-1980.

“The analysis was conducted with data from roughly 6,300 meteorological stations around the world.”

Yes, and independent studies show that NASA picked stations where urbanization put those stations in “heat islands” that are considerably warmer than the surrounding environment.

“According to the researchers, 2016 is set to be a record-breaking year entirely given the January-August trend. In a tweet, Schmidt says there is more than 99 percent chance that this will be the case.

“The month was 1.51°F (0.84°C) warmer than the global average between 1950 and 1980, and they say it was 0.18 degrees warmer than the previous records seen in July 2011 and July 2015.  NASA declared the first half of 2016 to have been the warmest six months on record, as many parts of the world experienced ‘oppressive’ levels of heat this summer, according to Nasa’s Earth Observatory.”  The chart above shows an erratic record with bumps, up but the overall trend is clearly down.

“In June and July people living in Siberia, the Middle East and large areas of North America faced extreme heatwaves. The US’s three largest metropolitan areas – New York, Los Angeles and Chicago – all experienced heatwave alerts in July as well. California is also in the grips of its worst drought in decades.”  There will be events of this kind within any long trend, but we maintain, the overall trend is down and the drought in California is consistent with that idea as the colder air off the North Pacific is carrying much less moisture than would warmer water.

“Parts of Siberia, where the weather is normally relatively cool, saw temperatures more typically found in the tropics. Hot weather melted the permafrost in the Yamal Peninsula to reveal an infected carcass of a reindeer, triggering a major outbreak of anthrax.”  This is one event regarding one dead animal and has no place in a discussion of long term trends.

“Kuwait recorded a temperature of 129.2°F (54°C) on July 21 in what may be the hottest temperature on record in the Eastern Hemisphere if it is confirmed. According to Dr Schmidt, ‘The planet is getting warmer. It’s important for what it tells us about the future.” It is amazing an academic with a Ph.D. would cite one event as predictive!  That in itself tells us he is reaching too far.

The sad truth of the matter is that NASA has gone to the dark side of science, virtually all the way back to the days of alchemists claiming they could turn lead to gold with the yolks of Griffin eggs. The Griffin is mythical bird just as “anthropogenic global warming” is NASA’s mythical bird.