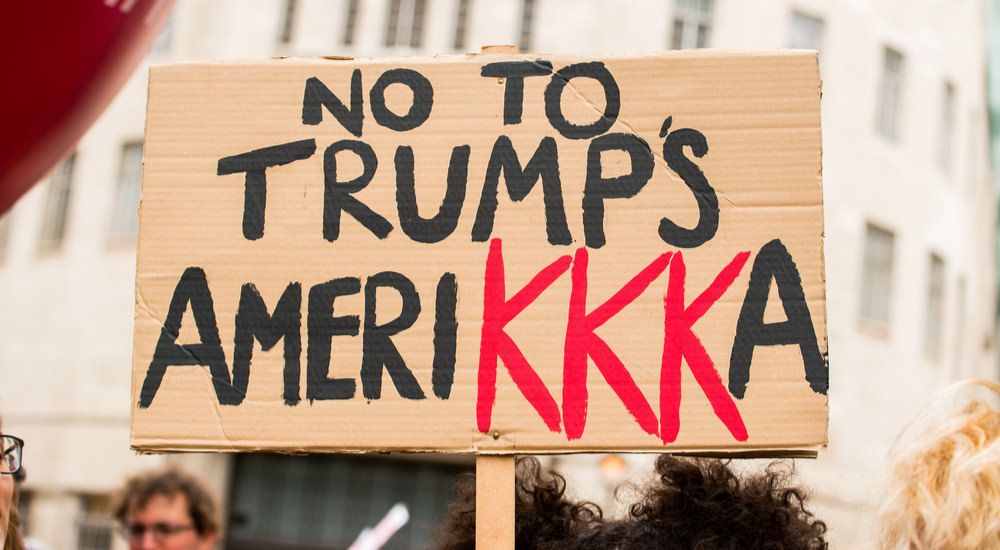 “NAACP calls it quits. Admits their policies failed. Everyone that isn’t Black is a racist now & they don’t know how it happened.”

That’s how The Time Travel Pundit responded to a @NAACP Tweet on Twitter last night which read: “Pardon of Arpaio is explicit embrace of the racist policing practices that leave communities fearful of very ppl who should protect & serve.”

Clearly the NAACP, off the rails as usual, is Meryl Streep “Alar is killing our children” outraged that President Trump pardoned Sheriff Joe Arpaio of Arizona Friday night. Their online presence promoting the NAACP’s position concerning the presidential pardon claims the president by pardoning the good sheriff:

“reinforces the administration’s agenda of criminalizing black and brown bodies…continues to convince the American public that President Trump upholds and validates White supremacy…[and] clearly states that President Trump is not interested in healing the nation after a deadly White nationalist march, but instead desires to fan the flames of divisiveness.”

That’s not all, before the Arpaio presidential pardon CNN published a report attacking not so much President Trump, but his voters. In response to CNN dubbing all of Trump’s voters racist, The Daily Caller offered up an article August 23, 2017, CNN: Evryone Who Voted for Trump is a White Supremacist by Default. DC’s Henry Rodgers wrote:

“CNN used the voices of a few professors and activists to assert anyone who voted for President Donald Trump is a White supremacist in a news report Wednesday, and to blame these “ordinary” people for the violence in Charlottesville.”

Two days later The Daily Caller, having attempted to bring CNN to their senses regarding the report followed up with another article. This time Jack Crowe wrote: CNN Has No Defense For Labeling 63 Million Americans ‘White Supremacists By Default’. He chided:

“CNN has made no attempt to retract or modify a Wednesday report that calls all supporters of President Donald Trump ‘White supremacists by default.’ The report stakes its weighty claims about the moral character of Trump supporters on the word of ‘activists, historians and victims of extremism,’ who argue that ‘ordinary people’ have empowered White supremacists.”

So. Let’s look around. Where are CNN’s White supremacists that “ordinary people have empowered? Has anyone seen an empowered White supremacist? Once in awhile a town or city is visited by maybe tens of klansmen or supremacists. They mill around waiting for everyone they were expecting to show up to show up. Eventually they drive home in time to watch News at Eleven, breathlessly awaiting confirmation of the arrival of their empowerment based on a mere ten seconds of film at eleven fame, late at night when ordinary productive folk have already retired for the night, the onerous sights and sounds of White supremacy all but lost to them before they count the third sheep.

To understand why White supremacists are not empowered it will help to understand a particular meaning of the term foil:

“What we observe in literature very often is that a foil is a secondary character who contrasts with the major character to enhance the importance of the major character. The etymology of the term foil … is taken from the practice of backing gems with foil … so that they shine more brightly.”

Foils in literature or social justice activities are not empowered. Foils enhance and empower a designated major character or characters. The empowered major characters sent to oppose the KKK and White supremacists, whether they gather in Seattle, Toledo, or Boston have typically been such activist groups as BLonlyM, Antifa, ADL, and vocal members of various trade unions.

Having just recently called for all Confederate monuments to be removed, it will be only a matter of time before CAIR is added to the list of eligible activist groups invited to show up at events like in Charlottesville, Virginia a couple weeks ago, to protest privileged White supremacists wherever they might be standing, in line presumably to aggrandize some of that empowerment stuff they’ve been accused of misappropriating.

Let’s be mindful a precious stone does not manipulate a slip of foil to sit on so that it can shine more brightly. Rather, a master jeweler with a magnifier carefully prepares a setting with a foil underneath to enhance the allure of the object of a bride’s affections.

Or. with only slight modifications the above paragraph can more properly be understood to mean: Let’s be mindful BLonlyM does not manipulate the KKK to sit on so that it can shine more brightly. Rather the DNC with MSM magnifications and focus carefully prepares a setting such as Charlottesville with the KKK underneath to enhance the allure of the object of a Democrat voter’s affections.

So yes, the closely aligned DNC, BLonlyM, NAACP, White Supremacists, KKK, ADL, SPLC, CNN, MSNBC, ABC, NBC, CBS, and several at FNC have been defeated. Their efforts to end racism by using White supremacists as a foil have exponentially created more racists with their each and every action and outrage. Somehow they have manufactured racists, not only out of everyone that’s not Black, but also out of many individuals of color, including Charles Barkley. Zerohedge writes:

“According to left-wing website The Root, Charles Barkley is a “White supremacist” because he says black people should stop getting angry over old statues and instead concentrate on not killing each other and getting an education. Certainly for criticizing Colin Kaepernick when he took a knee during an opening national anthem.

Omarosa Manigault has lost friends and colleagues working as an adviser to the Trump administration. The San Antonio Observer quoted her recent appearance on ABC’s 20/20, then editorialized:

“I was called every single racial slur in the book that you could direct towards an African-American by African-Americans,” Omarosa said. “I will never forget the people who turned their backs on me when all I was trying to do was help the Black community. It’s been so incredibly hard.”

Note: When working for a President who does not stand up against White Supremacy what did you expect Omarosa? – The Observer Staff

Well note this, San Antonio Observer: The Left’s darling ACLU accused itself of White supremacy ties this past week as splashed by a Washington Times headline: “ACLU admits to ‘White supremacy’ after tweeting photo of White baby with U.S. flag.” Just previously Glenn Greenwald’s The Intercept wrote concerning an ACLU announcement that they had taken up defense of the right of Milo Yiannopoulos to advertise on the sides of NYC transit buses: “For representing Yiannopoulos, the civil liberties group was widely accused of defending and enabling fascism.”

Who’s next? Will Al Sharpton or Jesse Jackson be added to the White Supremacy Hall of Fame? Heaven forbid. May it be said a century from now with Dan Brown surety, “Surely such a travesty has never occurred.”

Really. The DNC, NAACP, ADL, SPLC, BLonlyM, Antifa might as well close up shop, ‘cause they’ve made White supremacists of all, all of us.

This article was first published at TimeTravelPundit.com August 27, 2017.

PhD Chemist: New Strain Of Coronavirus Or Another Giant Con? How Deep Do The Lies Go?
January 25th, 2021 Sons of Liberty Media

Cartoon of the Day: Having a breakdown
January 25th, 2021 Liberty Unyielding

Biden’s Buttigieg Wants to Put Tax On Number Of Miles You Drive
January 25th, 2021 The Lid