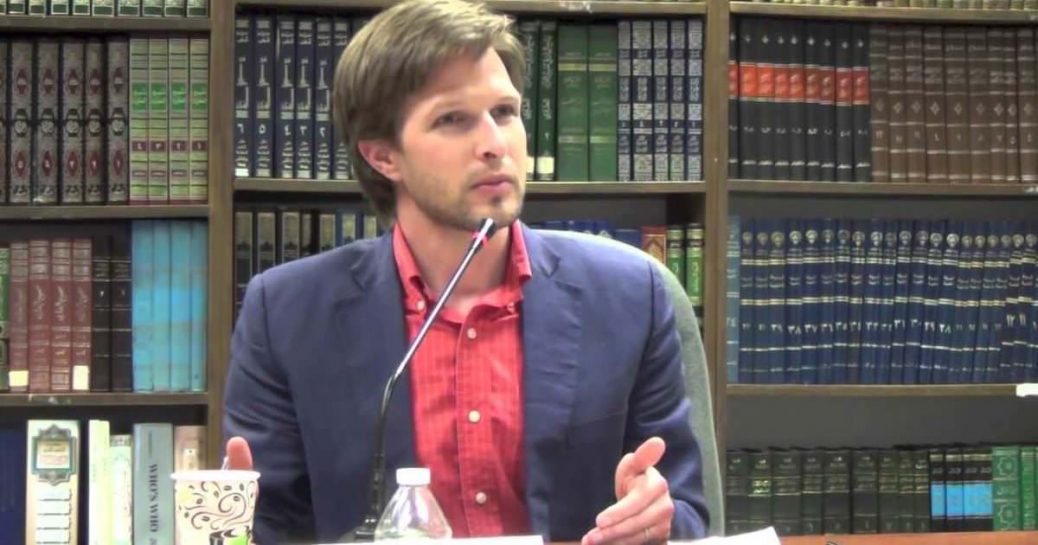 On Tuesday, February 7, 2017, if you were in an auditorium at Georgetown University, you would have heard something that should have made your skin crawl.   A professor, Dr. Jonathan Brown, a Georgetown Professor of Islamic Studies, says slavery and non-consensual sex is just alright in the world of Islam. Mind you, he said this in SUPPORT of Islam. As in he’s actually fine with slavery and non-consensual sex (real rape), and is using Islam to shelter his beliefs. This man is teaching at Georgetown. Got that?

This professor is indoctrinating, he is NOT educating.  He is one of the useful idiots that are so necessary to foist a disgusting culture on young, impressionable, people…and they are swallowing it, hook, line, and sinker, because they don’t know any better and haven’t the guts or intelligence to do due diligence to find out the truth.  He is teaching his students that men do not need consent to have sex with women, and that slavery is justifiable under Islamic teachings.   Brown stated that slaves were “protected by Sharia,” omitting the various atrocities committed by slave-owners. Girls and women were forced into the sex trade and their male counterparts were often castrated.

The history of slavery spans nearly every culture, nationality, and religion and from ancient times to the present day. However the social, economic, and legal positions of slaves were vastly different in different systems of slavery in different times and places.   Although slavery is no longer legal anywhere in the world, human trafficking remains an international problem and an estimated 25-40 million people are living in illegal slavery today.   The professor stated that “Consent isn’t necessary for lawful sex,” and defined consent as a Western concept.   If “Western” translates to “civilized”, I will go on record as saying that “consent” is absolutely necessary, and if the woman says “No.”, that’s it.   Although Slavery in Mauritania was criminalized in August 2007, in Mauritania it is estimated that up to 600,000 men, women and children, or 20% of the population, are currently enslaved, many of them used as bonded labor.

Unfortunately, even hearing this said at a “prestigious” university isn’t shocking either.  It seems to be part of a grand plan, using stealth jihad, to get the next generation(s) to accept something that is actually repugnant to them…if they would take the time and effort to think about it.   In Sierra Leone in the 19th century about half of the population consisted of slaves.   The Anti-Slavery Society estimated that there were 2,000,000 slaves in the early 1930s Ethiopia, out of an estimated population of between 8 and 16 million.   Slavery in northern Nigeria was finally outlawed in 1936…but, wait a minute, isn’t that where Boko Haram kidnapped over 200 school girls and sold many of them into slavery?   Yeah, I believe that’s the place.   Elikia M’bokolo, April 1998, Le Monde diplomatique. Quote: “The African continent was bled of its human resources via all possible routes.   Across the Sahara, through the Red Sea, from the Indian Ocean ports and across the Atlantic. At least ten centuries of slavery for the benefit of the Muslim countries (from the ninth to the nineteenth).” He continues: “Four million slaves exported via the Red Sea, another four million through the Swahili ports of the Indian Ocean, perhaps as many as nine million along the trans-Saharan caravan route, and eleven to twenty million, depending on the author, across the Atlantic Ocean”.

It is plain to me that slavery still exists.  It is also plain to me that Islamic-controlled countries are doing the bulk of enslaving the peoples.   African states played a key role in the slave trade. Slavery was already a common practice among Sub Saharan Africans long before the involvement of the Arabs, and the Berbers. I believe it has grown under those groups.   Selling captives or prisoners was common practice among Africans, Turks, Berbers and Arabs during that era.   There has also been speculation that within Africa, females were most often captured as brides, with their male protectors being a “bycatch” who would have been killed if there had not been an export market for them.

All in all, Professor Brown is presenting a horrible practice as something that is permissible.  In my research, Islam was started by a pedophile warlord who wrote down things that he liked to do, and told his followers that those were the words of Allah.   Because Islam condones very nearly everything that Western civilization abhors, it’s easy to gain converts…a good example is the conversion of many in prison.  They recognize that, by claiming it’s their religion, they can commit heinous crimes and may get away with it, because it’s written in their holy book.

Parting shot: I believe that Islam is a cult, not a religion.  I would not trust any Muslim as far as I could throw a Buick.  That makes me insensitive, hard-hearted, stupid…or whatever else you want to throw at me.  It doesn’t mean anything to me.  Anyone can follow whatever leader they want to, but don’t expect me to join in if it’s something so repulsive it harkens back to medieval torture processes.