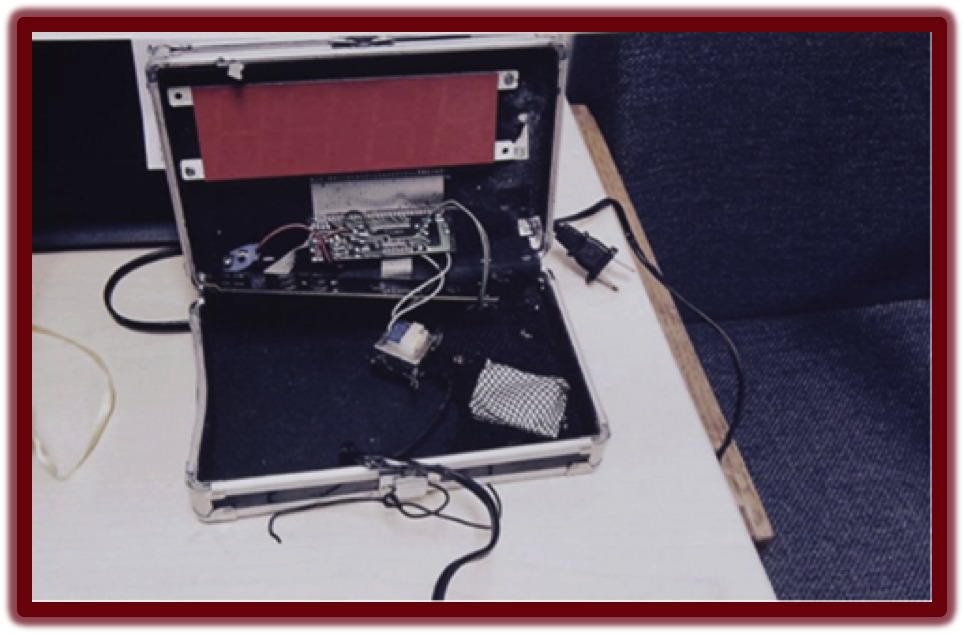 Islamist terrorist’s were quite literally inches away from another devastating attack on the United States.

The Islamists’ plan was quite diabolical,

All they needed was a Muslim President who would work with them.

Their objectives were to stop us remembering and honoring our dead on 9/11; to celebrate their 9/11 victory by terrorizing us again; to sneer, mock, humiliate and extract money by suing us Americans; and to force us to never criticize but rather, submit to them.

The Terrorist Act – Clock Boy’s Suitcase Bomb: In 2015, right after 9/11, the Islamists had Clock Boy bring a small metal suitcase, containing a clock with wires protruding out of it, to school. They had Clock Boy go around showing it to a number of teachers, including his engineering teacher, trying to cause panic. But the teachers told him to put it away. Then, he showed it to his English teacher, plugged it in and set off a ticking timer. When the teacher called the police, they confiscated the apparent bomb and suspended Clock Boy for 3 days while they investigated.

It was a deliberately provocative action: While the horrors of the WTC attack on 9/11 were fresh on our minds; no one, other than an insensitive Muslim, would have tried to terrorize Americans by bringing a fake bomb to school on the first school day after 9/11. It was not a class project, not an invention and not a clock. It had no purpose other than to look and sound like a ticking bomb. And it was a perfect trap: If the school and the police took no action; and it was really a bomb; innocent kids would be killed. If they did take action and it wasn’t a real bomb; they would be made to look like fools; and also be sued for millions.

Relationship to CAIR: The father of the Clock Boy, Mohammed Elhassen Mohammed was a senior member of CAIR and had posted photos of the Twin Towers on his FB claiming this was an inside job by America and not perpetrated by Islamic Terrorists. In his Arabic version of FB, he had conversely referred to 9/11 as “egg that lays golden eggs for America has terrorism.” He also repeatedly ran for President of Sudan; even though he resided in Irving, TX.*

Their Islamic PR machine was prepared to swing into action and use Obama’s media to create a massive wall of publicity. According to plan, the Islamists orchestrated an intense media campaign.* They created a world-class storm of outrage against the School, the Police, the City. Conservatives, Conservative Media and anyone they could link to the incident. CAIR, an Islamist Organization itself listed as a Terrorist Organization by 6 Arab countries; and formally linked by the US government to the designated terrorist organization Hamas and to the Muslim Brotherhood; held multiple press briefings claiming that Clock Boy had been subject to “racism” and “hate.” Obama’s media published sob stories of the poor “victim” being subject to “Islamophobia” and “Racist” attacks by the school. They conflated the disciplinary actions taken against Black kids with this Muslim kid and claimed the school district was discriminating against Clock Boy. Clock Boy’s father tweeted every action and even served Pizza to the National Media. Clock Boy generated 100,00 followers and a hired a publicist.

President Obama himself got into the act. He invited Clock Boy to the White House to express his solidarity with the “maligned and victimized” youth, praised his scientific genius and said he should be given a scholarship. Obama had his Justice Department open up an investigation. The Saudis paid all expenses for the family for a pilgrimage to Mecca. Qatar gave him and his family free tickets and offered him an all expenses paid scholarship for 9 months. CNN promoted a fundraiser for him. TIME named him one of 2015’s most influential teens. Mark Zuckerberg said Clock Boy should be embraced rather than punished for his ingenuity. Twitter gave Clock Boy a summer internship. Clock Boy was even invited to a science and technology competition hosted by Google and Sergey Brin himself met with Clock Boy!!

This also set up the perfect cause of action for lawsuits and multiple million dollar claims Mohammed tried to collect on the “Racism” and “Bigotry” supposedly heaped on his son. He demanded abject apologies and also demanded $15 million from the City of Irving and the School District. He also filed a 21-page defamation lawsuit against Fox Television Stations, LLC; Texas resident Ben Ferguson, Ben Shapiro, City of Irving Mayor Beth Van Duyne, Glenn Beck and The Blaze, plus Jim Hanson, a counter terrorism expert and his Center for Security Policy. Hanson had explained the affair had the look and feel of a typical “influence operation” to what the Muslim Brotherhood calls its ‘civilization jihad’ against the West.

The Brilliant Defense: was conducted by American Freedom Law Center (AFLC). Co-founder and senior counsel David Yerushalmi stated the AFLC was founded to counter organizations like CAIR who use and abuse the legal system with their cynical form of lawfare to undermine our constitutional liberties — notably free speech. “This case is a classic Strategic Lawsuit Against Public Participation or ‘SLAPP’ case and should be dismissed.” “Islamists use the progressive mainstream media to label any public criticism of a sharia-centric, jihad driven Islam as ‘Islamophobic.’ And they add fear and financial ruin to the equation by utilizing the legal system to file SLAPP actions.” He explained the purpose of a lawfare-driven suit is to censor, intimidate, and silence critics by saddling them with the cost of a legal defense until they surrender their criticism or opposition and stop commenting publicly on the connection between jihad, terrorism, sharia, and Islam.

He continued, “We have confronted these lawsuits across the country in federal and state courts and have defeated CAIR and its minions at every turn. When appropriate, we have won sanctions. This lawsuit will be no different.”

He said the 2011 Texas Citizens Participation Act (TCPA) intends to protect citizens “from retaliatory lawsuits that seek to intimidate or silence them on matters of public concern.” And added that the    Defendants were entitled to petition the court for their legal fees and associated court expenses plus “recover sanctions” against the plaintiff and his attorney “and all other further relief to which they may show themselves justly entitled, whether at law or in equity.”

The Motion to Dismiss Pursuant to the Texas Citizens’ Participation Act also sought that the court will sanction Clock Boy’s father, the Plaintiff in the defamation lawsuit, “in an amount sufficient to deter the filing of similar suits in the future.”

The Judgment: Dallas District Court Judge Maricela Moore dismissed the claim by Clock Boy’s father with prejudice, meaning he cannot bring suit again. She also said the Defendants were entitled to the attorney fees and costs; and also recover sanctions against Clock Boy’s father. Hopefully, the sanctions awarded will be sufficient to deter the filing of similar lawsuits against other innocent Americans.

Obama will soon be gone: Thank God, Obama will no longer be around to foment and encourage the filing of lawsuits to prevent us from exercising our free speech rights to object to Islamic Terrorism in all its forms. But we should not ignore the power of the forces arrayed against America; the Print and TV Media and the Social Media Giants, all worked in close collaboration with Saudi Arabia and Qatar to advance Islamic lawfare against us.

President Donald Trump is the only one who has the courage to confront and defeat the Islamist Jihad. Let’s all wish him well and pray for him to succeed.