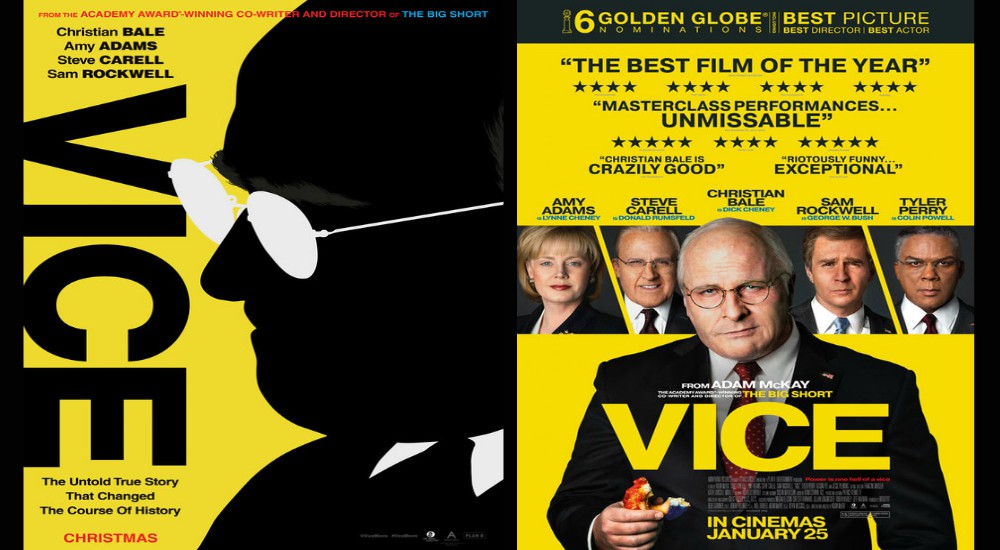 With the coming opening of the movie “Vice,” liberals again attack Republicans as evil in every way.  The movie takes a close look at former Vice President Dick Cheney as a supposed power monger.  What annoys me the most about this hit piece is the physical portrayal of Mr. and Mrs. Cheney.

Actor Christian Bale gained 29 lb. to try to look more like Mr. Cheney.  Actress Amy Adams put on a fat suit to try to look more like Mrs. Cheney.  In reality, during his tenure as Vice President, Mr. Cheney had a body mass index of 25.1, so Bale is exaggerating.  Mrs. Cheney was only slightly overweight, if at all.  Why do these actors believe that replicating this attribute is so important?  They seem to be sending the message that Republicans are fat losers.  Considering the fact that beautiful Tea Leoni plays a Secretary of State in the television show “Madam Secretary,” making an obvious parallel to Hillary Clinton, the other message is that Democrats are physically perfect.

To set the record straight, let us look at the physiques of recent US Presidents. Our most recent Republican ex-President is George W Bush.  As President, Bush regularly performed aerobic and anaerobic exercise.  His resting pulse was 43 beats per minute.  He was in excellent condition.

President George HW Bush jogged daily into his sixties. His recent death at the ripe old age of 94 shows that staying thin leads to longevity.

President Reagan maintained his health with many exercises.  After his assassination attempt, his therapy included lifting weights.  The only negative result from his bulking up was a need for a new wardrobe.  He died at age 93.

President Ford as a college student was on the University of Michigan football team.  He helped that team to two undefeated seasons and national championships.  As president, he weighed the same as he did in college.  He died at age 93.

As for the Democrats, President Obama is a smoker.  This is why he looks gaunt.  The average smoker loses 25 years of life expectancy.  When Obama goes, he will not be missed.

At 6 ft 2 in and 236 lb., President Clinton had a 30.3 body mass index.  Perhaps the stress of being married to Hillary took its toll.

So far, I present the idea that Republicans are healthier than Democrats. President Carter, to his credit, contradicts this.  He jogged regularly and is alive today at 94.  He deserves a lot of praise.

Our current President, Donald Trump, like Clinton, is 6 ft 2 in and 236 lb. It is noteworthy that First Lady Melania Trump was in a profession, modeling, in which health is essential.  I hope that she imparts her good habits onto her husband.

Notwithstanding the last two examples, the pattern is clear. Republicans are healthier than Democrats.  The above actors are trying to deceive us.  If Christian Bale wants to play a White House occupant who craved power, he should keep his extra weight, put on a blonde wig, and portray Hillary Clinton.