Mueller’s Witch Hunt PROVES to be Just That 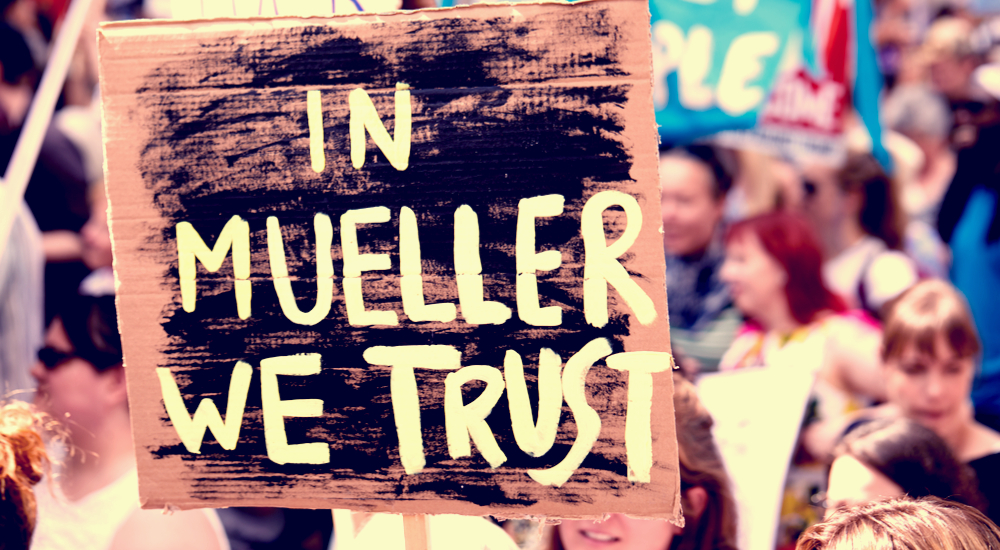 Editorial credit: Kevin J. Frost / Shutterstock.com
INVESTIGATION PROVES N O T H I N G!
WASHINGTON, D.C. 3/24/19–Robert Mueller is a strange looking man, if not downright spooky. He has a long Boris Korloff typeface that enabled Korloff to effectively play the original  Frankenstein Monster in the movies.  Mueller would perfectly fit that role if they re-franchise that series. In his favor, he is far more sinister looking than Korloff.
They say a person creates his or her looks by what they really are in life. Indeed, by the time one is 30, he or she deserves their looks. Can anyone remember the Democrat Women who offered to pose in the nude to raise money for “the party?”  What a curious display of pulchritudinous blubber that would not arouse the horniest of men even if they had overdosed on Viagra. If a photo of those naked Democrat women wound up in an art gallery, the title would have to be; “The Reason for Twin Beds.”
The battles between the two political parties could rightly be called, The battle of Good vs. Evil. Who could be more evil than a Democrat who believes in the wholesale slaughter of unborn babies so as not to inconvenience the accidental parents? DemonCrats hate babies so much that they blocked a bill that would have allowed anesthesia to be administered to babies before they were literally dismembered in the womb….pulling off their arms and legs, one by one, then the head while these little lives were silently screaming. Babies in the womb feel everything being done to them.
Now the democrat party has made it a law to kill an unwanted baby after it is born. Yes, a healthy baby is born, then MURDERED in cold blood by the Democrats from hell who are pure evil. Yes, it is not political parties but a battle between good and evil. God and the Devil. This is the contest today. Remember that distinction, and re-establish your church roots and participation.
The Satanic side, of course, hates President Donald Trump who believes in protecting lives, strengthening our economy, so that all citizens can share the American Dream, protecting our borders, allowing only legal immigration, and keeping the bad guys in prison.
This has triggered a definable outrage from Satan himself who wants to see only evil on this earth. The last thing he wanted was to have a good man in charge of America, a man who will provide a better life for all and to bring the church back into prominence in American lives.
Robert Mueller, who lives on Satan’s evil side, was desperate to find something-anything damaging on President Donald Trump in order to force our duly elected president out of office.  The word “impeachment” began echoing through the streets the moment he was placed in the Oval Office. The Democrat Party was in a panic mode. They are the Communist Party with their candidates sponsored by Communist Party USA (CPUSA). Their goal is to turn America into another Venezuela and the other 3rd world countries who have given in to that evil political organization. The goal is a world under Satanic Communist dictatorship.
Mueller instigated an elaborate investigation hoax to find something, anything, that would put President Trump in a bad light, serious enough to bring him down and push him out of the Oval Office.  Both Hillary and Obama were standing in the wings to take over The United States of America. President Trump rightfully described Mueller’s so-called ‘investigation’ a Witch Hunt, which it actually proved to be.
The “investigation” lasted 742 days at a cost of $27,000,000.00…(that’s million) of the taxpayers’ money, which means OUR money that we worked for and were forced to give in taxes. That breaks down to, $36,288 and 14 cents a day for this bogus investigation.
Today, the “report” was turned in to Attorney General William Barr who could not find one indictable offense, even though 19 lawyers were hired to find dirt, 40 FBI agents, 2 Intelligence officers. 2,800 subpoenas were used, 500 search warrants, 230 commercial records, 13 requests for 500 witnesses, 13 requests to foreign governments. And this is only PART of what we paid for Mueller to do.
The Attorney General came to this conclusion after examining the voluminous paper stack Mueller had gathered to hurt Trump;  “There are no records of any  collusion or coordination with the Russian influence in this election or interference in it.”  So the whole mess was indeed huge political theater with a desperate attempt to hurt our President Donald Trump.
We must order the Democrats to pay back that 27 million bucks to the people who paid that money in taxes since this all PROVES that this was one big political witch hunt lie. Conservatives, contact your representatives to make this happen.
ANALYZING TODAY’S NEWS FOR TOMORROW’S HISTORY