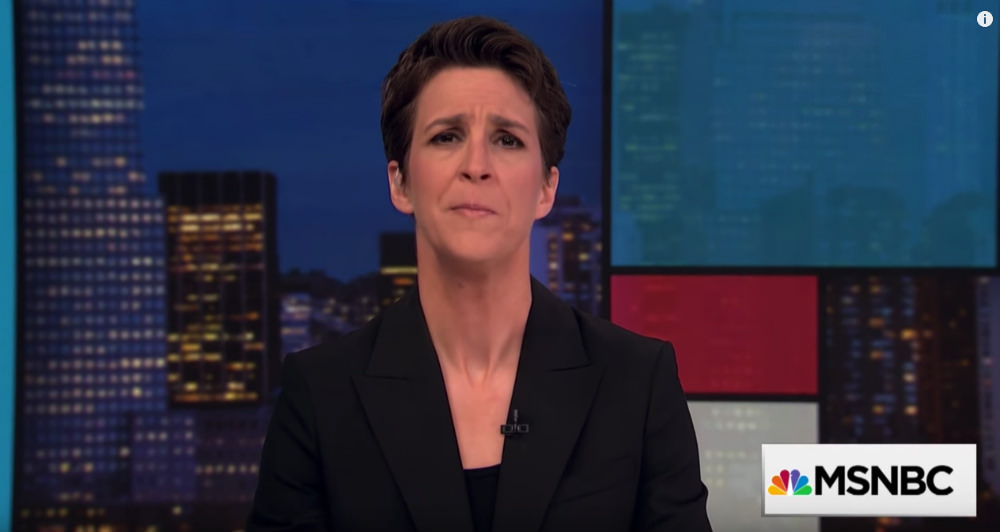 Rachel Maddow is the most popular personality on MSNBC, but she is also proof-positive that liberals are hypocrites. How? While Maddow can spout off on conspiracy theories and invent stories that don’t actually exist… when conservatives offer their own opinions on the day’s news it somehow becomes “fake news.” How anything that Maddow says can be considered news, while our conservative journalists are attacked for their work… is beyond me.

On Thursday night, Maddow found a way to blame the riots in Venezuela… on President Trump.

“There have been weeks and weeks and weeks of rioting and violent protests. And now today, Venezuelans are enraged anew by this brand new FEC filing from the White House, which shows … while Venezuelans have been rioting in the streets, while there have been acute food shortages and medicine shortages… Venezuela’s state-run oil company somewhere found a half-million dollars to donate to the very, very, very inexplicably overfunded Trump inauguration.

This is a country that should be a rich country, but people have literally been starving in Venezuela. Somehow in the midst of this incredible economic and political crisis.

Meanwhile another half million bucks was enough… to open the National Security Council… to a very well-connected donor and international investor who had a plan that he wanted to share on Venezeula.”

There was even a moment in the segment where a chyron on the show actually blared… “Unrest in Venezuela Over Trump Donations.”

Folks, none of the protesters/rioters who are starving on the streets of Venezuela care a lick about a possible donation to the Trump Inauguration. NOT A SINGLE PERSON. Most of them probably have no idea it happened, but more than that half a million dollars would just be a drop in the bucket, it would do nothing to solve the problems in Venezuela. The unrest goes back MONTHS, and even YEARS. Things are just starting to boil over because now, the people who used to be the socialists biggest supporters are also beginning to starve.

Watch the Ridiculous segment for yourselves:

Thankfully, it seems that people on Twitter were quick to dismiss Maddow’s segment as “FAKE NEWS.”

The notion that unrest in Venezuela is due to Trump is too insane for words. Great job Maddow. pic.twitter.com/tw0VchNQGf

But here's the other problem; I searched transcripts. This is the 1st time Maddow has mentioned Venezuela protests since they've started 3/

HOTTEST ‘hot take’ ever? Rachel Maddow’s scoop about unrest in #Venezuela is ‘too insane for words’ …https://t.co/42AlyqybBK