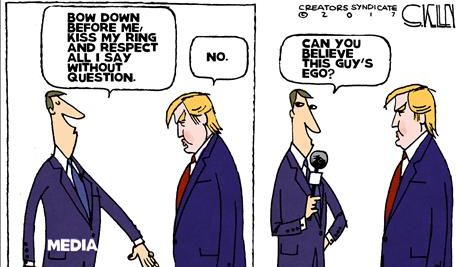 A caller to Rush Limbaugh portrayed the MSM’s attacks on Trump to the nuclear attack in the movie “Mars Attacks” where they absorbed the nuclear blast into a balloon and then inhaled it as if it was helium.

Leftwing media has gotten so complacent in dealing with the GOP wimps, who have become conditioned to bow and scrape whenever they are criticized, that they are at a complete loss when it comes to a man of Donald Trump’s caliber.  They threw bombs at him during his campaign believing they could end him, and now that he is President they are going insane in their belief that going nuclear will be his undoing.  But The Donald just absorbs their biggest nukes and laughs while they are all exposing themselves as the Democrat’s hacks rather than the journalists they claim to be.

They truly believe their bias is undetectable to us.  They honestly believe that they are the purveyors of truth, and that the right wing is a bunch of lying provocateurs when the truth is thrown back at them.  They trust in the public’s ignorance that they can claim to be the most honest and forthright of human beings and that the people will believe them.  They believe Trump tells lies to deceive rather than exaggerates to make his point, but that their own facts are always perfectly accurate and themselves above reproach.  They think they can portray bloggers as propagandists who make up stories without people realizing the MSM are the ones telling fairy tales.  They don’t realize that they are naked in the public’s eye.  They think their hate filled bigotry is not visible to the general public while they wage a propaganda war to destroy The Donald before he can institute any of his pro-American agenda.  And when they are called out on it by President Trump they sit there trying to look innocent and cry, “Who, us?”

Leftists don’t understand that when what they report is always favorable to Democrats and unfavorable to Republicans it becomes obvious to any thinking person that is actually paying attention.  None of the media actually practices journalism anymore, the objective reporting of events, but all practice either Yellow Journalism or outright propaganda.  This is never more evident than when the GOP-E types like John McCain, who kisses the media’s ring to curry favor by speaking out against his fellow Republicans, declares he would cross the aisle to work with Democrats.  The MSM pours out their love on anyone who attacks Republicans and American values, which is why they love the primaries, but then spits their poison at the nominee.  His pandering didn’t stop them from conducting their character assassination of him when he received the Republican nomination to run for president in 2008.  McCain’s kind of obsequiousness is what sickens conservatives who have longed for a real man to stand up to the mass media’s obvious bias.  Americans don’t want a Republican who works with Democrats to advance the Left’s agenda for the America haters.  If a Republican wants the media to love him then all he has to do is become a Democrat.  But those Democrats who became Republicans, like Tim Scott, are treated as traitors to their country and even their own race.

Liberals cannot allow the truth to be heard in conjunction with their own ideological arguments because then people would realize just how wrong all liberals are.  That’s why they all despise FOX News and Rush Limbaugh.  FOX has liberals on their programs arguing with conservatives that results in the foolishness of their leftwing ideology being exposed and their misinformation put on display.  And Rush always exposes liberals for what they are so they hate him for it because they can’t stand for the truth to be revealed.  That is why liberals always say to not listen to them.

Liberalism as taught in college

Liberals claim to be the compassionate ones, those who are always prepared to give the shirt off their backs and open their homes to someone in need.  But when it comes down to it they don’t ever do it.  Instead they demand the government take money from those who work and pay taxes and gives their money to the illegal aliens stealing across our border to take our jobs.  Then they make excuses to justify their theft by claiming the rich are greedy and won’t share their wealth without regard to how much they give to charity.  They call a border wall to protect the country from invaders a “Berlin-style Wall” that Communists used to keep their people from escaping to freedom.  Liberal stupidity is on full display in their demands to open the borders to let anyone in – including Moslem terrorists and Islamic jihadis that want to impose Sharia on the entire world!  But you never see them open their own homes to outsiders.

Put liberals to the test

As Rush Limbaugh says, “Liberalism is the most gutless choice you can make.”  Choosing liberalism means choosing to express how much you care, but not actually taking responsibility to take care of a stranger.  Instead, they build bridges to America’s enemies and give American’s hard-earned money to deadbeats.  America has long needed an accomplished man like Trump to take the wheel as one who believes in taking the responsibility of working for your supper and not living as a parasite off of others.  Protecting Americans is the job of the President, not picking American’s pockets.  Obama should have been impeached for refusing to enforce America’s immigration laws as his oath required.  But liberals want to impeach Trump for enforcing our laws by calling our immigration system broken and him insane.  If they want to see insane they should look in the mirror as they continue to listen to the MSM that affirms their dysfunctional thinking.

“Give a man a fish and he eats for a day.” – Liberalism

“Teach a man to fish and he eats for a lifetime.” – Conservatism

“Give him someone else’s fish and he’ll vote for you.” – Democratic Socialism

President Trump has flushed out the unhinged Left

Leftist Democrat media delusionally believes they are without sin