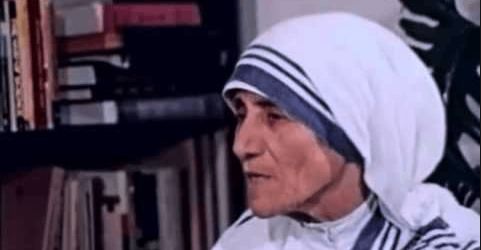 Dale Netherton (hereinafter, DN) and I have been going back and forth on iPatriot about Christianity, and the existence of God; or as Dale would say, god.

In his article Mother Teresa’s Dilemma DN has painted a painful portrait Mother Teresa, receiving the saintly accolades of the world while secretly wondering:  If there is a God, where the hell is He?

To his great credit, DN has not simply condemned Mother Teresa for hypocrisy.  For a life of hypocrisy it surely was.

We usually think of hypocrisy as saying one thing and doing another.  This was not Mother Teresa’s issue.  She acted as she spoke.  Her disconnect came from acting and speaking other than as she thought and felt.  Her inner life was one of Question, her outer life a facade of Certainty.

Rather, DN has written of Mother Teresa with compassion and caring, not just for her, but for those who might follow in her footsteps.  In doing so he has actually followed the biblical prescription for appraising an erroneously believing believer.  In his first letter to the church in Corinth the apostle Paul writes:

If there is no God, no Christ, believers are pitiable.  And pity Mother Teresa DN does, eloquently. (Indeed, I too pity her for having borne such an internal struggle for so many years.)

While seconding the compassionate aspect of DN’s analysis, let me say that the doctrine and dogma that DN criticizes so harshly is that of a popular misconception of Christianity: salvation through self-sacrifice and good works.  But this is just the reverse of biblical Christianity, where salvation leads to seeming self-sacrifice (in the eyes of the world) and to good works.

It is not difficult to see how DN could have viewed Mother Teresa as an example of salvation through good works.  Her works garnered world-wide fame, for herself and for her Church.  But what does the bible say about this path to God?  Here is what the Prophet Isaiah had to say about our good works, our righteous deeds, in the sight of God:

For all of us have become like one who is unclean, And all our righteous deeds are like a filthy garment; . . . (Isaiah 64:4)

This is worse than it sounds.  A modern, less delicate, paraphrase of the original language would be “All our righteous deeds are like a used tampon.”

To those young people whom DN is concerned may follow Mother Teresa’s path of unhappiness, let me say that the only path to God is through Jesus, and Jesus insists that to do this you must die to yourself  (You know the way you are?  Knock it off) and be born again.  While in no way wishing to denigrate or judge Mother Teresa (to throw her under the bus), it must be said that dying to yourself is a spiritual matter; mortifying the flesh (in Calcutta or anywhere) is unlikely to do the trick.  Putting the cart before the horse just leaves you wondering where the hell the horse is.

I think that the true lesson of Mother Teresa’s story is:  Don’t try to fake it.  And more; if you feel called by God to some righteous work be careful.  Be very careful.  Be absolutely certain that it is indeed God calling and not just your own desire.  Or worse still, Satan calling.

To those of us with a spiritual warfare view of things, this is a real possibility.  In 1946 the young girl who was to become Mother Teresa had several mystical encounters with – her term – “the Voice,” asking her to serve “the poorest of the poor.”  In one of her letters she said “I came to India with the desire to love Jesus as he has never been loved before.”  Red flags.

Satan wants to take us out.  If he can’t do it with sin, then grinding us down and making us miserable with a life of unrelenting, debilitating “good works” will do.

Regardless of its source, the misery of a believer can be quite valuable to Satan.  Ever wonder why Mother Teresa received so much of the world’s notice and acclaim?  Well, Satan is the prince of this world, and Mother Teresa’s unhappiness is now being used to turn others away from God.   This is quite possibly ROI for the enemy of us all.