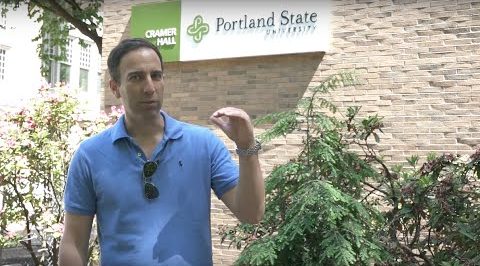 Traditionally, a monster is defined as someone who doesn’t know the difference between good and evil. At least this old-style monster knows that he lacks this fundamental trait. But what can you do with someone who doesn’t realize that such things exist?

A recent story illustrates this new kind of monster.

Film-maker Ami Horowitz visited Portland State University, which considers itself creative and tolerant, in order to see how far students would go in supporting anti-Israel action. Posing as a Hamas fundraiser, Horowitz requested donations for the destruction of hospitals, schools, and even cafes (where assumedly collge students hang out). In just an hour, Horowitz bagged hundreds of dollars. Some even offered to donate more in future.

Horowitz didn’t mislead the students; he described Hamas’ mission in detail. And they donated anyway.

These are not random wackos; these are average American college students.

It is easy to blame the professors–and they are partially culpable–but the problem is deeper than that. The students themselves lack the knowledge of good and evil. These concepts truly have no meaning for them. A prime example is the rise of “safe spaces.”

There are two kinds of safe spaces. A physical space, fitted with soothing toys and tasty treats, where students can hide when the burden of difference grows too heavy; and an insivible force field that surrounds each student, insulting him from the trauma of new ideas. New ideas–and the individuals that generate them–are threats to his perception of the world, which is divided into Me and Not-Me. Not-Me must be silenced or destroyed.

This is a form of nihilism, but instead of separating the individual from society it seeks to join him in a hive of like minds. The little Me’s best defense is to merge, like the Borg or the Daleks, into a great big Me whose sole thought is ruin. This is why the students were so drawn to Hamas; its structure mirrors their perception of the world.

Because this view requires an internal black hole, which sucks at the core, it eventually collapses in on itself; the students paid for the annihilation of people just like themselves. And what if they one day fall short? Their comrades will kill them. And then the killers will be killed. And on and on and on.