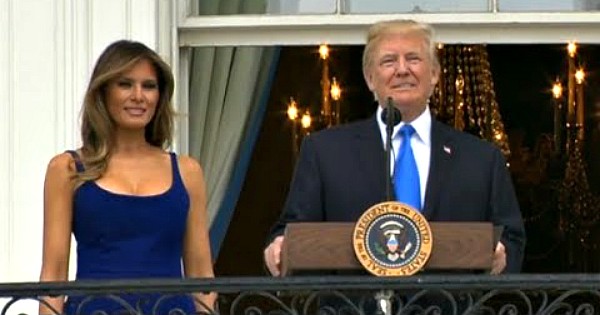 President Trump gave a stunning Independence Day speech where he pledged his undying support for our military men and women.

The speech was yet another example of the President’s unmatched ability to connect with his audience and to display the kind of gravitas that led more than 60 million Americans to vote for him in the last presidential election.

Welcome, everyone.  The rain stopped just as we came out.  I don’t know what that means, but it’s not bad.  (Laughter.)  And Happy Fourth of July.  Great honor to have you with us.  (Applause.)  Melania and I truly appreciate and celebrate America’s independence with those who courageously defend our country — the men, women and families of the United States military.

It is because of you that well over 300 million American citizens can live in freedom.  There is one military family here today I am especially excited to recognize:  Our great Vice President, Mike Pence, and our Second Lady — never heard that term before, but that’s what they say — and she is some lady, that I can tell you — of the United States, Karen Pence, are here along with their son, Marine First Lieutenant Michael Pence.  Where is Michael?  (Applause.)  Great.  It’s great, Michael.  Michael, not only are your parents proud of you, not only am I proud of you, but America, Michael, is very proud of you.  Thank you.

Representing the United States Army is Captain Jean Gwon.  She served 14 years, and today she is Company Commander in support of Old Guard, where she oversees the 120 soldiers who protect the Tomb of the Unknown Soldier.  It’s beautiful.  Captain Gwon is joined today by her husband, Captain James Folwell.  Thank you both for your service, and thank you to every soldier here with us today and serving our nation, and serving us all around the world.  You are truly the army of the free.

From the Marines we have Marine Sergeant Yannick Tumukunde.  He’s with Marine Helicopter Squadron One, an outfit I’ve come to know and admire very much since arriving at the White House.  Sergeant Tumukunde is a senior technician and is the sole chief martial arts instructor and trainer for the entire squadron.  Thank you, and thank you for being here.  And also, we lay claim to a very special title.  You are a United States Marine.  That is a special title.  Thank you, Sergeant.

From the Navy we have Lieutenant Commander Allison Maybrey, a Navy oceanographer.  Her leadership has improved the atmosphere.  And really what she’s done is so incredible, having to do with sensing, modeling, and predicting the electromagnetic warfare capabilities of various countries that hopefully we won’t be thinking about too much.  But she’s there, and she’s got the information like nobody has.  We thank Allison and her husband, Lieutenant Commander Michael Maybrey, here with their children, Emma, Lily, and Amelia.  Our incredible sailors embody the Navy credo: “Not for self, but for country.”  Thank you.

From the Air Force we have Technical Sergeant Ralph Bunnell.  Sergeant Bunnell is responsible for leading 50 security forces personnel that protect the President, the Vice President, and visiting foreign heads of state.  A big job, a very important job.  We want to thank you — to Ralph and to your wife, Patricia.  And thank you to every member of the Air Force who gives our nation total superiority in the air, striking fear into the hearts of our enemies, and inspiring hope in the hearts of our friends all around the world.

Finally, representing the Coast Guard we have Petty Officer First Class Tony Franklin.  Tony is a Gunner’s Mate and is directly responsible for the armament of 17 units.  He has led countless gunnery and pyrotechnic demonstrations — so I don’t think the fireworks are going to impress him very much, but I will tell you they’re going to impress you.  (Laughter.)  Thank you, Tony.

I want to thank everyone in the Coast Guard.  I was at the Coast Guard Academy this year — gave the commencement address — and it was an amazing, incredible group of people and a really great day.  Thank you, Tony, very much.

Each of you here today represents that rare combination of patriotism, virtue, and courage that our citizens have always — and I mean always — admired and that our enemies have always feared.  At this moment, your brothers and sisters in arms are posted around the globe, fighting our enemies and standing watch to protect our nation.  They’re fighting for us.  We are thanking them, praying for them, and saluting them for their selfless sacrifice.

And I want to just tell you that our country is doing really, really well.  No matter where you look, the economy is blazing.  And on every front we’re doing well.  And we do have challenges, but we will handle those challenges — believe me.

You’re part of a new, and a truly great generation.  Two days ago I spoke with Lieutenant Colonel Dick Cole, who served as the co-pilot of the lead B-25 bomber pilot — and piloted by Lieutenant Colonel Jimmy Doolittle during the daring 1942 raid, after the attack on Pearl Harbor.  Lieutenant Colonel Cole and the rest of the Doolittle Raiders launched their aircraft into the sky knowing that they would not have enough fuel to return to friendly territory.  That’s not a good feeling.  That’s a lot of courage.

Our servicemen and women are preserving the legacy of courage and selfless service that they inherited from Lieutenant Colonel Dick Cole and so many others.