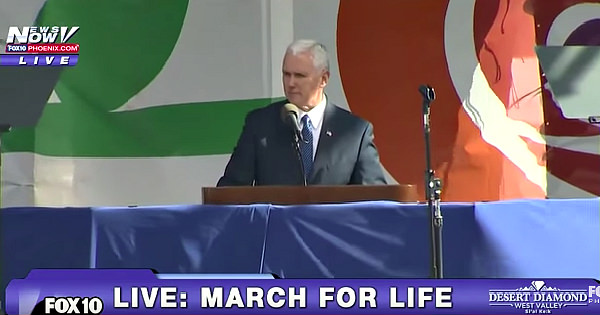 In 1973 the US Supreme Court made history by creating law, a function reserved by the Constitution only for Congress. The Supremes said it was legal to murder unborn infants in the womb. The next year the first national March for Life took place in Washington, DC, with marchers strongly championing the rights of unborn Americans to one of the three vital unalienable rights (God-given rights that cannot be taken away) in the Declaration of Independence: Life. They have marched in every one of the 44 years since then.

Last week Vice-President Mike Pence made history by being the first Vice-President and the highest-ranking government official to ever take part in the march. Many presidents (particularly Democrats) have ignored the Marchs or acted as if the marchers had leprosy. Some past presidents have given weak support for the March. Some even sent low-level representatives to the March.

But President Trump is the first president ever to send his Vice-President and his Counselor (the highest-ranking woman in his administration) to represent the White House. It is also noteworthy that his pro-life speech was the Vice-President’s first major address since the Inauguration.

By the way, Vice President Pence and Presidential Counselor Kellyanne Conway are no strangers to the March for Life. This was no political stunt to play to Trump’s base of Evangelical Christians. Both Pence and Conway participated in the March for Life in the past, long before they were household names in America.

Trump even gave his personal support to the marchers. He tweeted that “The March for Life is so important. To all of you marching – you have my support.” Most presidents – even Conservative presidents – have been afraid to publicly support Life. But Trump is fearless in this regard.

To understand how serious Trump is about supporting Life, one of his first executive actions was to reinstate what has become known as the Mexico City Policy. This policy has become something of a political football.

In 1984 President Ronald Reagan implemented the policy, which bans federal funds from being given to international organizations that perform or promote abortions. George H.W. Bush continued the pro-life policy, but – not surprisingly – Bill Clinton reversed it when he took office. President George W. Bush reinstated it, but Obama tore it up when he was elected. Now Trump has once more reinstated the Policy.

The moral of this mini-history lesson? If you don’t want your tax dollars to pay for abortions in foreign nations, never elect a Democrat president again.

By reinstating the Mexico City Policy President Trump took an important first step toward keeping his campaign promise to defund Planned Parenthood. I’m planning a major article on Planned Parenthood, but here are just a few facts that make it clear that not on federal dollar should be used to fund this bloodthirsty organization.

Although it claims to provide a “broad range” of healthcare services to women, unimpeachable statistics and former employees show that it is almost exclusively an abortion mill.

The Bible makes it clear says in this verse and many others that an infant in the womb is a life created by Him:
“For you created my inmost being; you knit me together in my mother’s womb…
Your eyes saw my unformed body; all the days ordained for me were written in your book before one of them came to be.” Psalms 139:13, 16

Thank God that we have a president, a vice-president, and a large percentage of the new Administration that is staunchly pro-life. After eight years of a pro-death president, it is a refreshing change.

VIDEO: Kellyanne Conway’s Speech to the March for Life