Memorial Day: Remembering Those Who Gave All 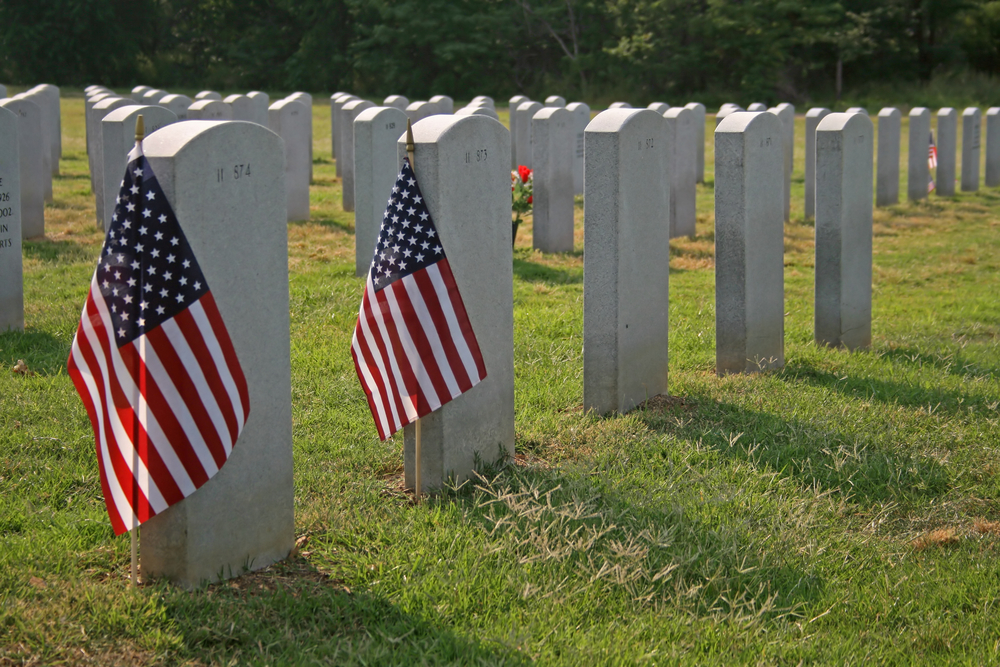 I enjoy walking the abandoned trolley line through the woods into the Village.  As I walk the long, straight path, I enjoy observing an optical illusion.  There is a tall smokestack that was part of the machinery used in the now-abandoned factory, a factory that long-ago brought jobs and prosperity to the Village.  The smokestack is now a tower for cellular telephones, to bring phone service to every corner of the Village.  The illusion makes it appear that the smokestack is leaning and about to topple, but in reality, the many electric poles along the abandoned trolley line are leaning and the parallax enhances the illusion.  Just because the majority of the poles are leaning does not mean that they are right.

At the end of the path, the woods suddenly end and there is the intersection of several roads and a railroad crossing.  This is the Village, with the abandoned factory building, a dam and waterfall, a pizza shop, a convenience store, the US Post Office, and behind them are scores of homes built for the factory workers.  Deep in the woods, behind the abandoned factory building, is a modern factory that prints books.  On the other side of the railroad crossing is a small grassy area between the road and the railroad tracks.  A war monument was built at this location.

This beautiful park is a tribute to the villagers who left their families and beloved Village to defend our country.  They joined the service, not to give their lives for their country, but to do their small part to preserve our freedom, and then to return and resume their lives.  Of course, when they joined, each of them knew that he might never return to his family and his beloved Village.

Without these few courageous people from each community, we could not enjoy the freedoms that make our country so prosperous.  In the middle of the park is a large granite monument with a section for each war and the names of those who fought.  As I examined the names below each war, I realized that some of the same surnames kept appearing war after war.  It is an illusion to believe that any peace can be permanent.  Each generation must re-fight the battles to keep the barbarians at bay and our country free.  Most of the people in the Village stayed home and let others go and risk their lives.  I remember a time when those who served were ridiculed by the majority.  But the ones who served; they were the ones who stood tall and did what was right.

Regardless of the cause or justification of the war, the ability of our nation to raise an army is what keeps us safe and free.  If a nation cannot raise an army, it will not remain free.  Whether Korea, Vietnam, or any war, is justified or necessary, the fact that the United States can raise an army proves that we will fight to the death to defend our country against any invader.  This is the greatest possible deterrent to any aggressor who seeks to invade our country and destroy our way of life.

After staring at the monument for several minutes, I turned and saw a smaller, but more important monument.  It was for those who left their families and beloved Village, but never returned.  I scanned the section for the Vietnam War and found the names of some of my classmates.  I remembered them, and their goals and ambitions which never came to fruition because of their service and sacrifice.  What could they have accomplished had they lived?  But where would our country be today had men like them been unwilling to risk their lives for our country?

Sadly I walked back into the woods and followed the abandoned trolley line in the opposite direction, toward home.  After traveling for several minutes, I turned back and looked at the tall smokestack which still appeared to be leaning.  I knew that the leaning was an illusion and that there was no doubt that the smokestack was standing tall and straight among the leaning electric poles.