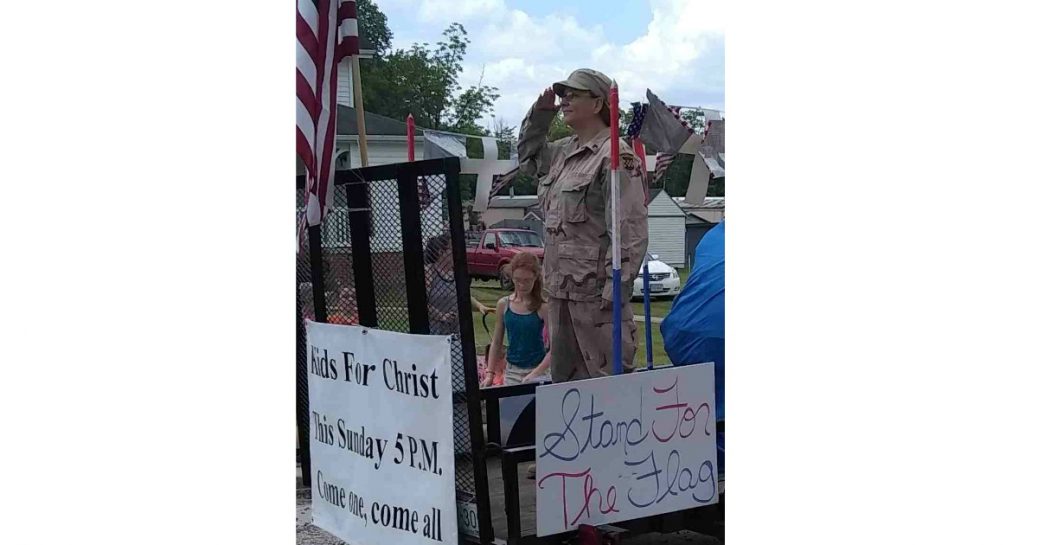 A year ago, Mary and I moved from Florida to Paw Paw, West Virginia (population 500) to be near our parents. Saturday was our first Paw Paw Memorial Day parade; patriotic Americana at its best. Both sides of Main street was adorned with flags – Old Glory proudly flying high waving in the breeze. The refreshing sound of Paw Paw school marching band’s excellent rendition of “America the Beautiful” filled the air. Remember the New York school principal who banned “God Bless the USA” on one occasion and “Stand Up for the Red, White and Blue” on another? https://bit.ly/2xq9puX

A Virginia school board Chairman, Ryan Sawyers, decreed that students will not be required to stand for the National Anthem or the Pledge of Allegiance. https://bit.ly/2LzRhBG

Judging by the demeanor and behavior of students as they walk pass our home everyday, Mary and I suspect Paw Paw school students are getting a no nonsense quality education. Unlike urban schools https://herit.ag/2INqvbe, I suspect Paw Paw students are not being taught that patriotism is bigoted and insensitive to illegals – taught that America is racist, sexist, homophobic and the greatest source of evil on the planet.

The parade featured antique cars, trucks and tractors – fire engines, a marching band from neighboring Berkeley Springs – floats from numerous civic organizations and churches. Kids excitedly scrambled for candy thrown from the floats. Many were pre-k children. My mind went to the Texas pre-k teacher who said under the “Welcoming Schools Program”, she must explain homosexuality to 4 year olds and teach them that “gay love is beautiful”. https://bit.ly/2sgVO3e Watching the toddlers laughing, playing and scrambling for candy, the thought of interrupting their innocence to indoctrinate them with confusing leftist propaganda is the height of wicked child abuse.

The parade float that truly moved me featured a female soldier in uniform who stood frozen at attention saluting our flag in the unforgiving sun and heat. The float had a hand written sign which read, “Stand for the flag”. This woman’s respect, discipline and commitment spoke a powerful silent message about how proud she is to be an American and what it means to be an American. As I watched the touching float move out of my sight, the soldier remained frozen.

Last football season, Trump said it was shameful for NFL players to disrespect our flag. Sports media, democrats, Hollywood, NFL management and players joined in a gang assault attacking Trump. They blasted their narrative 24/7 that idiot president Trump picked a fight with the NFL. These leftists had no idea that outraged angry football fans and the American people would side with Trump. So this season, the NFL made a smart business decision not to permit players to, in essence, give America their middle fingers on the field.

The NFL rule this season is players who kneel during the National Anthem will be fined. Displaying remarkable arrogance and disrespect for fans who buy tickets, the NY Jets owner said he will pay the fine https://bit.ly/2scZzY0; in essence, coddling his spoiled brat, ungrateful and disrespectful millionaire players.

Paw Paw’s parade was an extravaganza of patriotism with red, white and blue – stars and stripes displayed on horses, floats, cars, people and even babies. Clearly, Paw Paw is love America Trump country;Trump election signs still live on a few lawns. And yet, none of my mostly white fellow Paw Paw residents called me the “n” word or tried to lynch me. Fake news, mainstream media relentlessly promote their lie that Trump voters are white supremacists who hate everyone not like them. The atmosphere of the Memorial Day festivities was laid back and friendly – families enjoying themselves.

Mary and I are a black/white interracial couple. Shortly after moving into our Paw Paw home, white neighbor Peggy knocked on our front door welcoming us with an apple pie. White neighbor Ron showed up one day with corn from his garden which he promised would be the sweetest we have ever eaten. Ron was correct. Elderly white gentleman Charley and his buddy George pulled in our driveway to personally welcome us to Paw Paw.

Paw Paw’s Memorial Day parade, antique car show and festivities were refreshing and delightful. It represents the real America that is demeaned, impugned and despised by leftists. These folks voted for Trump because they felt leftists’ tyranny and knew our country was swiftly moving in the wrong direction. Trump respects everyday real Americans and is working hard for us.

Mid-term elections are coming in November. If democrats take congress, the deep state will surely impeach Trump. As crazy as this sounds, the deep state does not want America made great again. We must stay engaged helping Republicans keep control of congress.

It was a great day in Paw Paw, WV, Trump country USA. I am extremely proud of my wife Mary for showing remarkable restraint, sticking to her diet by not purchasing fried dough covered with powdered sugar.