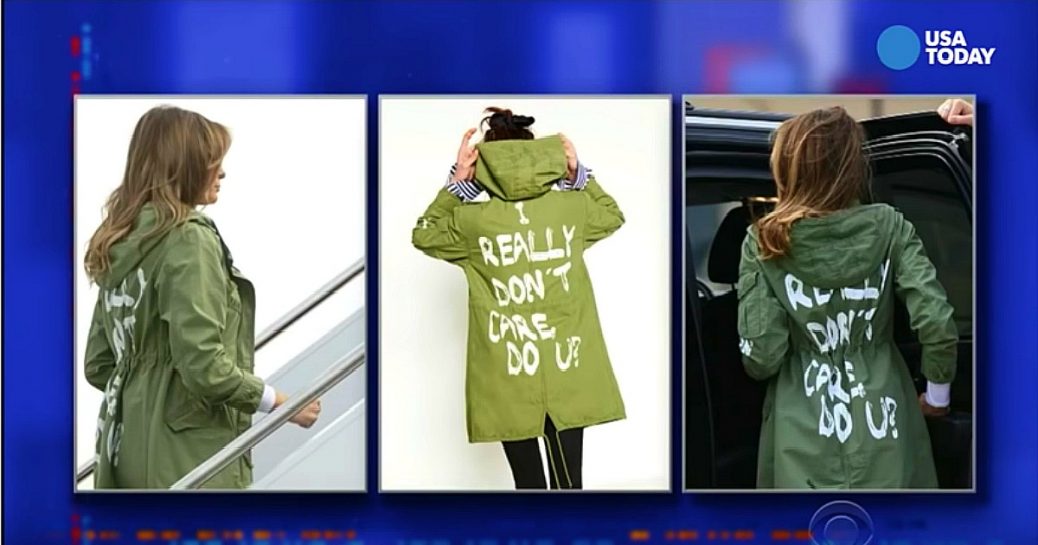 Melania Trump proved she is in the game and very much an asset of the Trump Administration to a level unsuspected, but here and now documented with a simple, but elegant, stunt.  She is, and will continue to be, a “secret weapon.”

“Never underestimate a woman,” is the first lesson every father teaches his son about being a man, “They are smarter than we and never forget it.”  This is a lesson most of us learned in elementary school.  We should realize this was her idea and she pulled it off with the precision of General Patton.  She may not be in the Cabinet, but Melania is definitely “at the table.”  This stunt was amazing:

A $39 jacket with a cryptic, “‘I REALLY DON’T CARE, DO U?’ in white stencil print threw Main Stream Media, MSM, into a total frenzy of confusion in which the more insane people exposed themselves as “Clinical.”  A few intelligent journalists consulted Mrs. Trump’s communications director, Stephanie Grisham, who said:

“It’s a jacket. There was no hidden message. After today’s important visit to Texas, I hope the media isn’t going to choose to focus on her wardrobe.” The last sentence was bait and tells intelligent observers it was a gag, but not one MSM person caught it!

Putting the cherry on the “Sundae” with the flourish of a bullring picador, the President tweeted: “I REALLY DON’T CARE, DO U?” written on the back of Melania’s jacket, refers to the Fake News Media. Melania has learned how dishonest they are, and truly no longer cares!

On his late night show Stephen Colbert joked about the jacket and visit saying:  “I’m going to guess this is one message she did not steal from Michelle Obama,”   Stephen appears to be running out of gas, but he continued digging saying, Melania was Trump’s, “most high-profile detainee,” to visit the immigrant children whom the administration has separated from their parents in Texas as part of a crackdown on illegal immigration and received polite applause.

The magazine “Elle” offered, “The optics are almost inconceivable, that the First Lady would go visit the immigrant children who have been forcibly separated from their parents by her husband’s policies, wearing a garment that literally spells out, I DON’T CARE. But there it is. Nothing could be clearer.”  For accuracy, the law was passed by Congress during the Bush Presidency and signed into law by George W. Bush.  The Democrats did nothing to it, but violate it, for the eight years they were in power.  This is not Mr. Trump’s baby.

It was in place during the Obama Administration, but not enforced per Mr. Obama’s orders to ICE so the Democrat Party could get more voters at the expense of the American taxpayer.  Nonetheless…

The Seattle Times said: “So how else to interpret the Zara jacket, a style in line with the signature self-protective aesthetic she has developed since entering the White House, except as an indication Trump was thinking about what people might read into the clothes she chose to wear to visit children left with, effectively, nothing?

The jacket, after all, which is reportedly sold out and is not from the current season, retailed for $39. It may be the least expensive garment the first lady has worn while representing the administration.”

The big “sell out” we see here is that of the American people as these immigrants are illegal, bring drugs that are killing over 30,000 Americans every year and cost us at least $60 billion in welfare and criminal justice to say nothing of the narcotic drug costs estimated at $300 billion of social and physical damage!

We applaud a brave American lady immigrant in our greatest tradition, bringing her beauty, charm, intelligence and elegance in a $39 jacket, proud of our country and not for the first time.