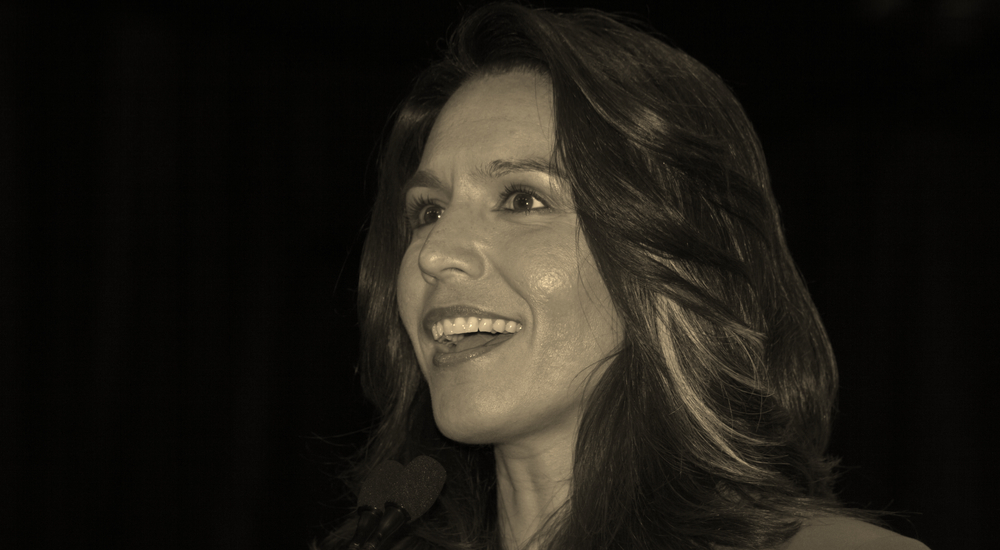 Former Congressman Ron Paul (R-TX) is a hero to many libertarians and conservative Republicans.

According to Paul, only one Democrat candidate is any good on foreign policy in the coming election… and her name is Tulsi Gabbard (D-HI).

You may remember Gabbard as one of the few Democrats in Congress who was willing to criticize the Obama administration’s foreign policy blunders (Hello Iran) while they were happening.

Sadly, other than her ‘non-interventionist’ philosophy there is little to like about the traditionally liberal Gabbard. She’s basically a far-left Democrat on everything else.

Recently, The Intercept’s Glenn Greenwald sat down with Gabbard to talk about her 2020 candidacy.

EVER SINCE TULSI GABBARD was first elected to Congress in 2012, she has been assertively independent, heterodox, unpredictable, and polarizing. Viewed at first as a loyal Democrat and guaranteed future star by party leaders — due to her status as an Iraq War veteran, a telegenic and dynamic young woman, and the first Hindu and Samoan-American elected to Congress — she has instead become a thorn in the side, and frequent critic, of those same leaders.

Gabbard’s transformation from cherished party asset to party critic and outcast was rapid, and was due almost entirely to her insistence on following her own belief system and evolving ideology, rather than party dogma and the longstanding rules for Washington advancement. In 2012, Rachel Maddow, upon announcing Gabbard’s victory, instructed her audience to learn Gabbard’s name because, the MSNBC host gushed, “She is on the fast track to being very famous someday.” In 2015, Maddow invited Gabbard on her show to herald her as one of the leaders of what Maddow touted as an urgently needed, new bipartisan congressional caucus composed of military veterans in the war on terror.

But by mid-2016, Gabbard committed the ultimate party heresy: She very publicly resigned from her position as Democratic National Committee vice chair at the peak of the primary battle to endorse Sen. Bernie Sanders after months of internally accusing DNC Chair Debbie Wasserman Schultz of corruptly violating the DNC’s duty of neutrality by favoring Hillary Clinton. Her accusation was later vindicated through emails published by WikiLeaks, Wasserman Schultz’s resignation, Sen. Elizabeth Warren’s own “rigging” accusation, and current DNC Chair Donna Brazile’s book, which caused Gabbard to publicly repeat her allegations of the DNC’s “unethical rigging” of the primary in favor of Clinton.

Gabbard has compiled a record on domestic policy questions that places her squarely within the left populist wing of the party — from advocating Medicare for All, a national $15 an hour minimum wage, various free college programs, and even participating in anti-pipeline Standing Rock protests in North Dakota. Yet her aggressive criticisms of the pieties of the bipartisan foreign policy community — particularly her harsh criticism of regime change operations from Iraq and Libya, to Syria and Venezuela, and her warnings about escalating tensions with Russia and China and the dangers of a “new Cold War” — have further cemented her status as party outsider and heretic from the perspective of Washington Democratic insiders.