Media Leading to JFK Moment for Trump? “Trump Should Consider What Happened in 1962” 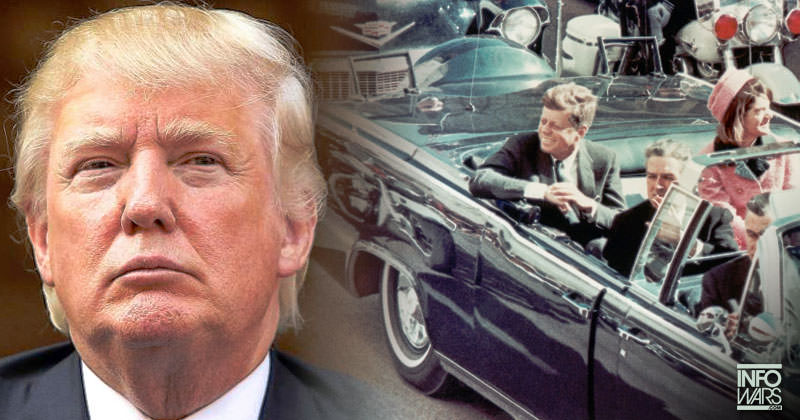 Of all the Dec. 2016 controlled-media attempts to associate JFK and assassination with President-elect Trump – and a Trump assassination attempt – one stands out as the most insightful. But let us first examine a few JFK December references from CNN, CBS, NBC, POLITICO, The National ENQUIRER and The New York Times:

Dec 2, 2016: The New York Times promotes two new books which shed light on the Kennedy Mystique. Twenty-Six Seconds, by Alexandra Zapruder, and JFK and the Masculine Mystique, by Steven Watts are more instructive about our own era than Kennedy’s.

Dec 12, 2016:  Even liberal POLITICO is complicit with the globalist JFK assassination association with Trump! POLITICO ended its socially-engineered controlled media with: “The president-elect has a responsibility to arm himself with all of the information available to him to keep Americans safe. An uninformed president isn’t equipped to ask the right questions or provide the right pushback. John Kennedy learned that lesson quickly. We can only hope that Donald Trump learns it before next month.“ “Before he does away with the ritual, Trump should consider what happened in 1962, when JFK made sure he knew as much as his generals did.”  By Josh Zeitz December 12, 2016

Dec 13, 2016:  President-elect Donald Trump has an opportunity to establish “American leadership through innovation,” Bill Gates told CNBC on Tuesday. “A lot of his message has been about … where he sees things not as good as he’d like,” the billionaire Microsoft co-founder said on “Squawk Box.” “But in the same way President Kennedy talked…”

Dec 14, 2016:  CNN reports: “JPMorgan hacker fugitive arrested at JFK.” This JFK reference conveniently fits in the idiom of more Fake News about Russia. An American hacker fugitive “accused of” hacking into JPMorgan Chase in the “largest theft of customer data” from an American bank was arrested on Wednesday, according to the U.S. Department of Justice.

The FBI is investigating a series of cyber attacks against US banks “thought to be coming from Russia.” At this time last year, Joshua Samuel Aaron was believed to be hiding in Moscow — the last remaining member of a three-person team of criminal hackers who had evaded arrest. On Wednesday, federal agents arrested him at John F. Kennedy Airport in New York City.

Dec 15 2016 – KNNS which syndicates leftist Glenn Beck presented a JFK interview. Beyond Reality Radio with Jason Hawes & JV Johnson – guest Robert Wilcox discusses his book Target: JFK and the new information presented regarding who may have killed JFK and why. The same KNNS hosting leftist Glenn Beck promotes Target: JFK. (Hawes and Johnson may have been unwitting pawns regarding this interview.)

Time does not permit analysis of motives and associations for each “news” reference to JFK.  Let us consider the lying and social engineering of the National Enquirer – its Fake News that Castro’s deathbed confession was that he killed JFK.  In this contrived propaganda piece, there is only a slight and negligible reference to Jack Ruby, as of little to no consequence.

Jack Ruby (Rubinstein) in with the criminal Chicago shadow goverment – the same coordinating the anti-Trump Fake News in the controlled media today – was protected by the Fake News of complicit LIFE Magazine Nov. 29, 1963, and Dec 6, 1963.  LIFE made a complete turn around in its Nov, 25, 1966 issue. This was the same LIFE Magazine which did an America-insulting several-page Memorial to Trotsky (Bronstein) when assassinated in Mexico.

“And now,” as Paul Harvey would say, “for the rest of the story.”  A meeting took place at Jack Rubinstein’s apartment on the afternoon of Sunday, Nov. 24, 1963. Present were George Senator, Bill Hunter, Jim Koethe, Tom Howard, and James Martin.

Only a few hours before George Senator testified before the Warren Commission, Bill Hunter died a violent death on April 23, 1964. Jim Koethe died a violent death on September 21, 1964. March 27, 1965, Tom Howard died “of a heart attack” at age 48. Dorothy Kilgallen, the famous New York columnist, was the only reporter allowed to interview Jack Rubinstein during his trial. She died Nov. 8, 1965. Mary Brannum, editor of Screen Stars Magazine, received a phone call before Miss Kilgallen’s body was found saying Dorothy Kilgallen had been murdered.

Were all these untimely deaths associated with Castro? No. Were they all associated with criminal Chicago shadow govt. Jack Rubinstein? Yes. But wait. There’s more! If President Trump drains the swamp all the way back to the JFK assassination, he will discover Jack Rubinstein’s ties with the Chicago Mafia – of which Bill and Hillary Clinton are now the representatives, according to Clinton-insider Larry Nichols, who also revealed it was Hillary’s father who took over the Al Capone Chicago mob! Small world!

National ENQUIRER strongly sets forth it was Castro, a foreigner, who murdered Kennedy – merely as a smokescreen and a cover for a potential forthcoming Trump assassination attempt, to once again make the conditioned public believe it is a foreigner who will do this!

And it’s now between General “Mad Dog” Mattis and the world’s greatest Mafia running the Chicago shadow government – pumping its sewage into the swamp from the beginning.

For more on the Chicago Mafia and Hillary Clinton see www.BeforeItsNews.com