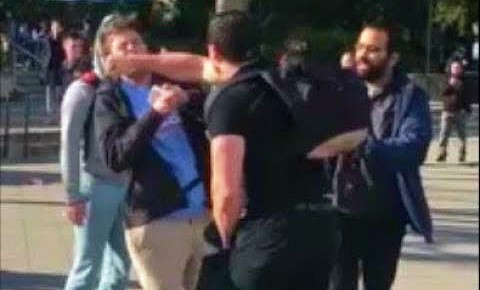 Did you know that a conservative was attacked by a leftist, in broad daylight, yesterday? You may have missed it yesterday, but it’s not your fault. The reason you didn’t hear about it is because the media didn’t actually cover the story… even though there were several videos of the attack.

See for yourself below:

Imagine if the attacker was wearing MAGA hat, would be national news!

This is the violent left!

Here is the altercation from my friends perspective. Conservative activists, take note. This is exactly the right thing to do, and I am so proud of him for recognizing the situation and not retaliating with violence. pic.twitter.com/QEuJWEQtz8

Breitbart got in touch with the student who filmed the attack and this is what he had to say:

The UC Berkeley student who recorded the video, Alex Szarka, told Breitbart News that he began recording the incident after witnessing the aggressor flip over a TPUSA table.

“As we were approaching the main area on campus where student groups have their tables set up, we noticed [the TPUSA student] with a sign that said something like, ‘be aware of false hate crimes,’” said Szarka to Breitbart News…

“Unfortunately, I’m not exactly surprised at what transpired,” said Szarka, adding that after the incident, he had heard an individual defending the actions of the aggressor.

“I heard a guy say something like, ‘Yeah, violence is not okay, but he was effectively asking for it by being provocative,’” said Szarka, “He was referring to the sign about Smollett.”

Both of these men were attacked:

– One was viciously targeted & beaten for his political opinions by those who disagreed with him.

– The other paid his attackers to beat him up & lied to the world about being a political victim for his own gain.

Which one gets media attention? pic.twitter.com/B60Kl30ga2

Here’s the vile leftist who decided violence was the answer.

The injured student in the above photo is Hayden Williams.

He is a conservative student who was targeted and beaten by a vicious leftist on the UC Berkeley campus.

He was hospitalized by the attack and sustained massive injuries.

For now, Berkeley seems to be pretending to care.

UC Berkeley has released a statement on the political hate crime assault on one of our @TPUSA activists.

Berkeley condemns in the strongest language the violence and asks for any assistance in identifying the assailant for police.

.@UCBerkeley and Chancellor Christ just sent out a message via email to the Berkeley community condemning the attack on the conservative activist. Thanks to everyone who helped make this happen! Let’s find this guy! pic.twitter.com/okHbLrX2C7

The victim seems to be in good spirits and is thankful for the support he’s received from conservatives across the nation.

My friend, Hayden, wants to thank all of you for the love and support. He’s giving you a wink, and wanted to let you know you’ll be hearing from him soon! pic.twitter.com/6kPmFZgQgz

How messed up has modern culture become that the media wastes their time on an obvious huckster like Jussie Smollett while ignoring real violence as it unfurls across the West Coast? California, Oregon, and Washington have all become hotbeds of leftist violence, where this type of activity seems to be growing more and more acceptable on the left. But CNN keeps pretending to be worried about MAGA hat wearing patriots.