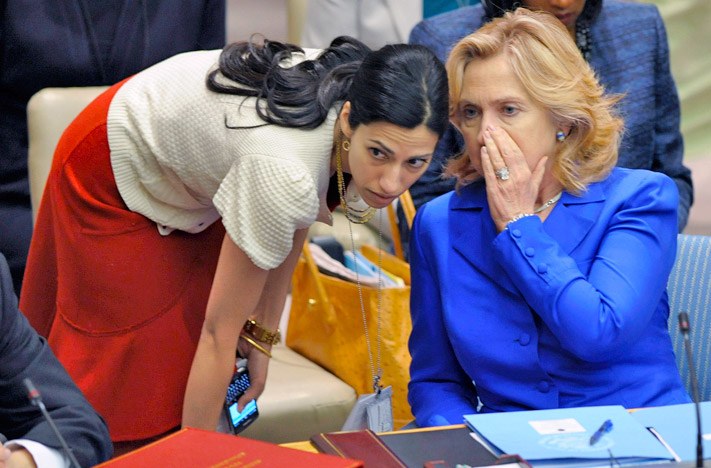 The FBI announcement they have re-opened the Hillary Clinton email investigation since having chanced into Huma Abedin’s laptop as a result of their investigation of her husband, former Representative Anthony Weiner’s, juvenile pornography activities on the Internet.

Huma Abedin, a Pakistani-American Muslim whose family has deep ties to Saudi Arabia, Pakistan and the radical Muslim Brotherhood, was granted Top Secret security clearance for the first time in 2009, when Clinton named her deputy chief of staff for operations. Abedin said she “did not remember” being read into any Special Access Programs (SAPs) or compartments. Apparently, Hillary’s dimentia is catching.

If Hillary become President she will appoint Abedin her Chief of Staff and she would run White House operations including security in a position that does not require Senate confirmation.  Huma now serves as Vice Chair of  Hillary’s Presidential campaign.  Huma has a reputation as an aggressive operative who has overridden security and diplomatic protocols.

In her April 2016 interview with the FBI, Abedin contended she “did not know Hillary had a private server until about a year and a half ago, when it became public knowledge.”  The “clintonemail.com” server was set up in the basement of the Chappaqua residence and it included emails from Huma!

Another witness told agents he and another Clinton aide with IT training built the server system “at the recommendation of Huma Abedin,” who first suggested an off-the-grid email server as early as the “fall of 2008.”  And, the FBI noted “the only person at the Department of State to receive an email account on “clintonemail.com” was HumaAbedin!

Thus Huma Abedin, whose email account as “[email protected],” was the only State Department aide whose emails were hosted by the private Clinton server she claimed she didn’t know existed until she heard about it in the news and claimed she “did not recall” the email exchanges.  Making false statements to a federal agent is a felony.  A lot of Clinton has rubbed off on Huma.

Several State Department people told the FBI they felt emailing Huma Abedin was “the equivalent of e-mailing Clinton.”  Abedin, routinely forwarded State government emails, including ones containing classified information, from her “state.gov” account to either her “clintonemail.com” or her Yahoo.com account “so that she could print them” at her home!  Which brings us to, “Then what?” given her Muslim faith and family’s Saudi background. Another Clinton aide told the FBI, “Abedin may have kept emails that Clinton did not,” which is also consistent with someone in espionage as something unimportant to Hillary may have had significance to Huma’s clients.

By forwarding classified emails to her personal email account, Abedin  violated a Classified Information Non-Disclosure Agreement she signed at the State Department on Jan. 30, 2009, in which she agreed to keep all classified material under the control of the US government.

Even so, the FBI did not search Abedin’s laptop or Yahoo email account in their year-long “investigation” into the mishandling of classified information and espionage. Nor did the bureau call Abedin for additional questioning, despite documentary evidence, as well as statements from other witnesses, that clearly contradicted her own statements.

We believe Director Comey made a deal with the Clintons, but they pulled a number on him or stiffed him outright so he pulled the string, but it will be Huma’s head on the block.  Fortunately, she looks good in orange.  Such was the short career of Mata Huma.