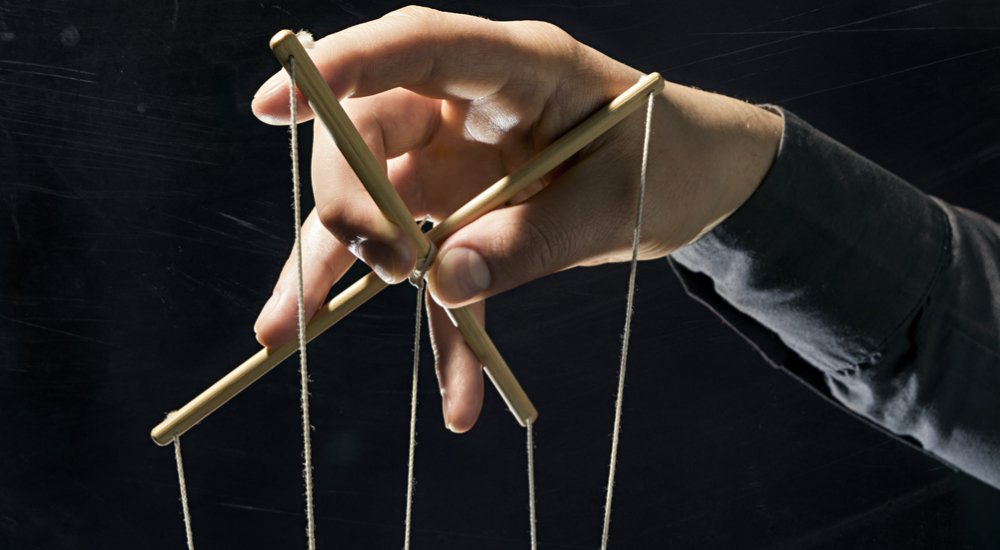 We selected the first & third definitions of “manipulation” from an online dictionary with the following link:

http://dictionary.reference.com/browse/ – these seem to fit our purposes, and are as follows:

Verb (used with object), manipulated, manipulating.
1. To manage or influence skillfully, especially in an unfair manner: To manipulate people’s feelings.
3. To adapt or change (accounts, figures, etc.) to suit one’s purpose or advantage.

Once upon a time there was a guy that was in “love” with a gorgeous petite red-haired girl; she – for whatever reason – seemed to lack confidence in her worth, and thus this guy spent an inordinate amount of time “building her up” i.e., flattering her; he claimed: ‘so she would “feel” better about herself…’ Well as things went along things did not work out for this couple, and in part because of the manipulation which was practiced by the particular fellow… This guy of whom we write – as he said – was boosting this girl’s ego, because of his “love” for her???? The guys head cleared of such nonsense when he read Saint Augustine’s: On Free Choice of Wills; there he encountered Augustine’s definition of evil: “Loving that which cannot be possessed, and moving everything out of one’s path in order to reside in – or possess – that which cannot be possessed.”

Now it should be noted that by “loving,” Augustine means “desiring…” Augustine further asserts: ‘ultimately one may only possess one’s own will; since one may have all other things may be taken away.’ Flattery – even when utilized to a bolster a beloved’s ego – is manipulation and therefore an evil/wicked act¹. And thus, the guy who “bolstered the ego of his beloved, through flattery, was not “loving her”,” he was manipulating her! But isn’t that a human reflex which moral education ought to counteract? “Yes!” but that begs the question: “Where does one acquire such moral education?” We leave this unanswered, for now (a topic for a future blog post, perhaps)…

¹ To manipulate is to attempt to misrepresent the facts, or the truth (the condition/s of what is…) with the hope of altering a moral being’s choice – to include their opinion, or judgment – so as to have such choice serve – in some way – the interest/s of the manipulator rather the interest of the individual being manipulated; a key element of manipulation, is that the individual subject to manipulation acts in the interest of another, but believing it to be his/her own interest for which he/she acts/chooses. Let us state clearly that manipulation is a natural behavioral tendency in humans – natural in the sense that it is an extension of the babe that cries for attention – thus, such behavioral tendencies must be thwarted through moral education; unfortunately, formal educations systems generally teach amorality and/or immorality…

Now we note – that the manipulation-of-perceptions seems to be something of a self-evident ubiquitous marketing ploy; whereby, marketing – utilizes manipulation – by associating “a happiness to be realized,” with the selection of the choice advertised.” Doing harm to customers is not the intended goal; the goal is an increased market share and bottom line of the marketer. It is likely that many financial hardships – for common folks – may be traced to these folks being seduced – into making bad financial choices – via irresistibility of marketing… Such marketing practices – as we indicated – are ubiquitous and are unconsciously assimilated, and employed, by the general population; wherein each relation – not ordered morally (moral relations are consciously contrary to market forces) – is unconsciously subject to market influences. Such relations – under the duress of life’s vicissitudes – have more in common with client/prostitute relations than e.g., an I-thou relation of love; thus the frequency of divorce…
Now classically truth is: “conformity of mind and object;” where the mind is in a state of dependence upon the independently ordered object, and when the mind apprehends the object – as it is – then a truth-relation is established. It was under such restriction, that Christendom and its progeny (the University) ascended, wherein, but one worldview, and one truth
In broaching the topic of “manipulation” our intent is not an exhaustive account to describe the detrimental effects – and affectations – upon personal relations, nor upon socio-economic and social instability, although each topic – without exhausting either – could fill lengthy volumes. We do, however, wish to note that politicians – as we note the advent of the 2018 political season – are perhaps some of the best practitioners of manipulation; particularly when those politicians are not morally bound – as Democrats are not morally bound, viz: Democrats, via the Democratic Platform, deny objective truth, and God². Moreover, Democrats are generally not held accountable – by the Press – for their lies; since the Press – generally – embraces and purveys the same moral nihilism as does the Democrat Party. Thus, Nancy Pelosi, Charles Schumer, Adam Schiff, Mark Warner, Dick Durban et al – via their avowed principles – have carte blanche to lie/manipulate the electorate to their heart’s content, knowing that the Press is almost guaranteed to universally to carry – or to muddy – the water for the Democrat, and for whatever is thought to be their (the Press and Democratic Party) mutual advantage. Thus, the Press – too – manipulates and thus this is why POTUS Trump refers to them as “fake-news” outlets… It then follows that one may almost make it a general maxim that one may answer the question: “How do you know “X” is lying?” where X represents almost any Democrat. With the response (as the old joke punch-line goes…): “Because his/her/their lips are moving!”

² Recall the 2012 Democratic National Committee voted God and Israel off their platform in 3 consecutive votes? See link: http://www.huffingtonpost.com/2012/09/05/dnc-god-jerusalem-platform_n_1859200.html (God and Israel lost on the 3rd vote as well, but Los Angeles Mayor Antonio Villaraigosa – the convention chairman – lied and said they voted God and Israel back on the platform; Villaraigosa was obviously afraid of how the Party’s real views would play in the National election)… The point is – as I have written before – an individual – or organization – that disregards, or dismisses objective morality can, and will do whatever it can get away with to obtain and maintain power; thus they prey upon the disenfranchised; in beguiling the dispossessed Democrats have always had many Lefties willing to pitch in and help them manipulate the downtrodden.