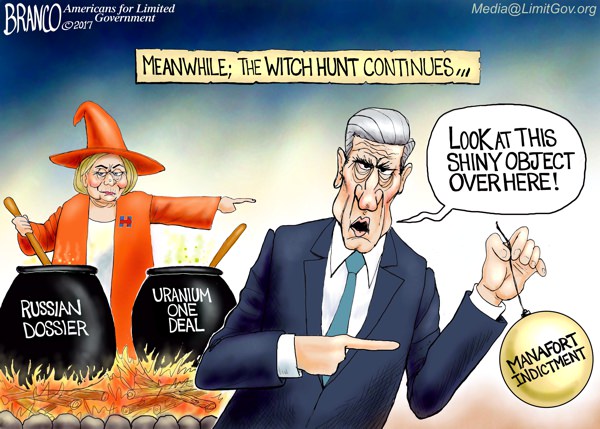 This is the event for which Mueller has been waiting after being assigned to investigate Russian collusion by Rosenstein.  Hillary Clinton has been outed for paying Fusion GPS to manufacture a phony dossier on Trump, and now that it’s out in the open the Mueller team leaks an impending indictment.  These charges made against Manafort & Co. are not about Trump-Russia collusion, but completely unrelated crimes.  This is how the Left distracts the low-information viewers of the leftwing media from the real crimes of Democrats. 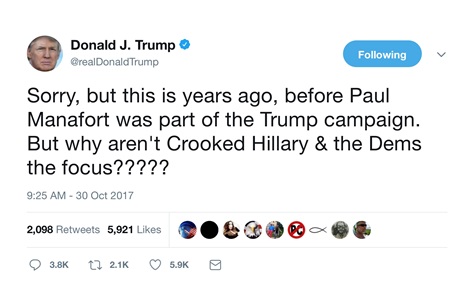 What does Russia and CO2 have in common?  Both are described by liberals as pollutants that will destroy the planet.  Like the hot air they expel from their lungs this is more about leftists polluting the public forum with their other frauds.  Every time a liberal exhales they pollute the Earth with the very gas they say will kill the planet, and along with it are their lies that are killing the truth.  This indictment is meant strictly for consumption by the low-information Democrat voter who only listens to the leftist media and has not heard about the exposé of Hillary and her campaign’s lies.  Manafort was supposed to be investigated over Trump colluding with Russia.  Instead, the special prosecutor dug back far and deep into the past of those he is charging making the indictment for supposed money laundering and tax evasion because of off-shore accounts and doing business with foreigners including Russians.  EVERY millionaire has off-shore accounts and does business with Russians because they have money to conduct trade.  This isn’t the revelation of a smoking gun that will lead to Donald Trump colluding with Russia to steal the election.  Even Jimmy Carter has admitted that’s all a fraud.  This is a smoke screen designed to provide cover for Hillary and Obama as they slink away from the crimes they actually committed during the campaign.

Liberal Democrats are threatening Trump against granting pardons to anyone charged by Mueller.  They did the same to George W. Bush who did nothing when Scooter Libby got railroaded as having outed Valerie Plame when it was proven a Democrat did it!  Like Libby, Mueller is charging him for giving testimony that was not perfectly accurate.  Leftists create a Process Crime of a witness giving a slightly different answer to a question from one day to the next.  Trump has proven he is a fighter who will not roll over for the Left.  It is time to pull out the big guns and get Sessions into this fight.  He needs to answer why he is not investigating the investigators.  Since this is no longer about investigating the campaign, but about witch hunting, persecuting, and railroading Trump supporters, Democrats need to be crushed to let them know their typical old lies won’t work anymore.