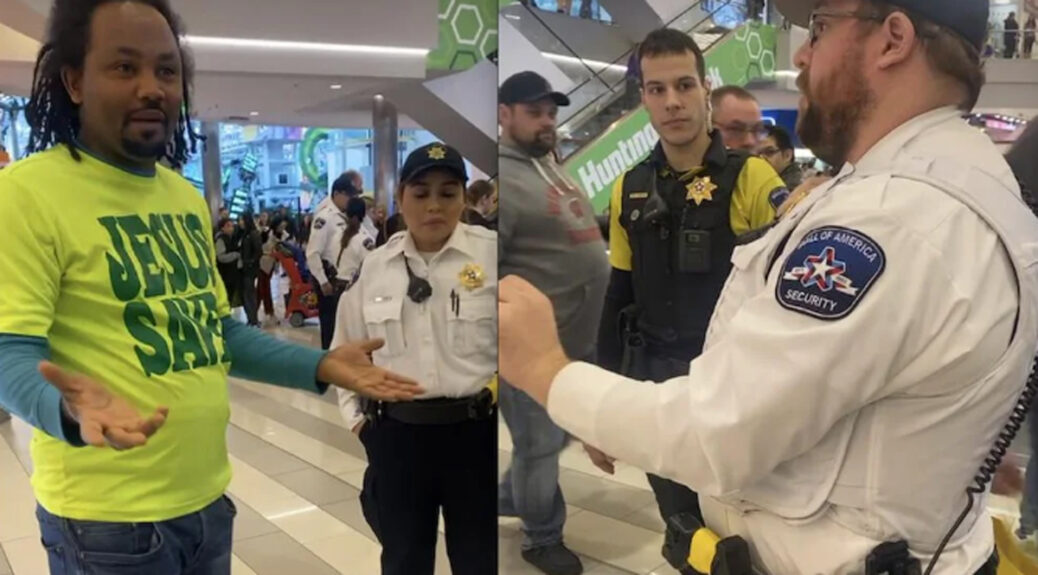 Security guards of the apparently misnamed Mall of America in Bloomington, Minnesota, have been caught on video telling a shopper to remove his “Jesus Saves” shirt because it “offends people.”

The outrageous confrontation was recorded a week ago, according to Alpha News.

The videos of the incident were recorded near the mall’s rotunda on Jan. 7, the site reported.

The front of the shirt reading “Jesus Saves,” and on the back it reads “Jesus is the only way” and includes the so-called “coexist” symbol crossed out.

The guard insists that the shirt is offensive.

“Jesus is associated with religion, and it’s offending people,” a guard saus, adding that “people have been offended.”

The guard then tells the man to remove the shirt of leave the mall.

The man protested that all he did was wear the shirt and wasn’t walking around saying things to people.

I automatically assumed this was overseas, but it's right here in America. pic.twitter.com/Q79eUCG7xh

The guard then replied, “Again … I’m giving you a couple options: take the shirt off, and you can go to Macy’s, and you can do your shopping — or you can leave the mall, OK? Those are your only options right now.”

In another clip, the guard says, “If you want to shop here, you need to take that shirt off!” And he adds that the shirt “is religious soliciting; there is no soliciting allowed on mall property, which is private property!”

Then he claims, “We’ve had guests come up saying that they’ve been offended by your shirt … take the shirt off, and you can go shopping!”

It is unclear if the man was forced to leave the mall.

In response, a group called Bloomington Patriots plans to demonstrate against the mall on Feb. 4.