The Louisiana Flood – A Tale of Two Tragedies 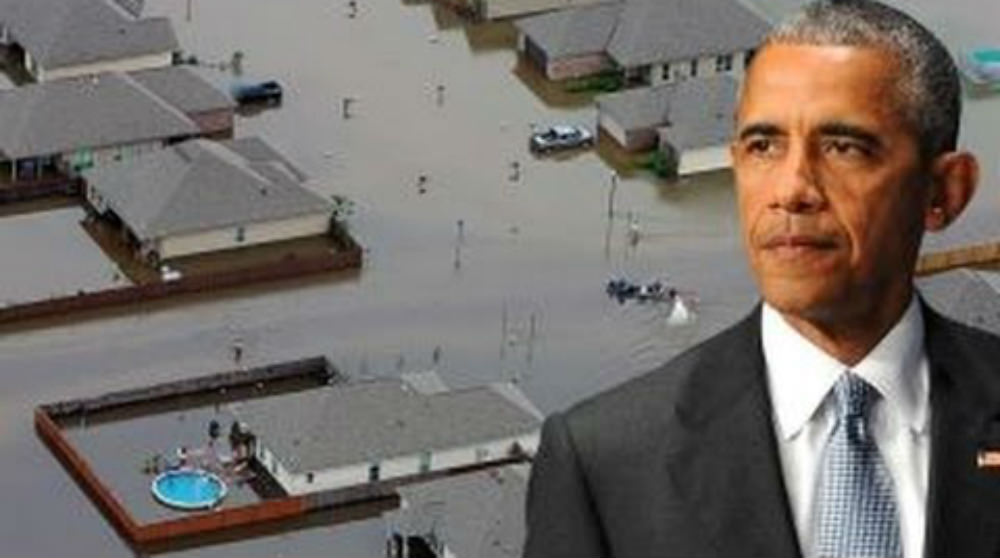 Having been a resident of Louisiana for most of my life, I feel obliged to say a few words about our good president’s initial public statement/action concerning the recent widespread flooding. Considering the unimaginable hardship so many were experiencing in the wake of so much devastation that literally came without warning, we might have expected Mr. Obama, as the leader of the nation, to offer words of compassion, empathy and encouragement, and to salute the spirit of Louisianans who were courageously uniting to overcome one of the greatest disasters in the state’s history.

Without bothering (evidently) to view any of the numerous videos or pictures of diverse ethnicities standing shoulder to shoulder and lending a helping hand (including police officers selflessly engaging in endless rescue missions while continuously placing themselves at great peril), Mr. Obama chose to do what he has always reflexively done—politicize. To those who were thinking surely this time would be different, no such novel approach would be forthcoming. Surely the heartbreaking spectacle of seeing so many families displaced and struggling valiantly to find some way to salvage what they could of ravaged homes and a lifetime of memories, yet still reaching out to neighbors in need, would give President Obama pause.

With Louisianans rolling up their sleeves, fighting the sense of despair and seeking desperately to find hope in the face of so much heartbreak, they were delivered yet another blow, this time from on high as it were. President Obama’s first official act was to issue a stern warning to Louisiana “not to engage in discrimination”. It would be hard to imagine how Mr. Obama could have more effectively executed the classic cheap shot or poured acid into an already gaping wound.

While the people of Louisiana were literally up to their necks in the harsh elements of the real world, Mr. Obama was firmly entrenched in his abstract world of forcing human beings into distinct pigeon holes; assuming superficial differences equaled a fundamental divide that overrode any common human bond (casual commonalities like, you know—how do I recover from this devastation; where will our family stay in the meantime; how do we replace things that took a lifetime of sacrifice to acquire; how will my family survive if the economy continues to get worse, etc.?).

But it wasn’t just that this was deeply offensive to Louisianans who were making no distinctions at all, seeing only neighbors in desperate need; it was downright bizarre, as though it must have emanated from some scene out of The Twilight Zone. One need only try to picture this stern policy applied in the midst of all the chaos to get some sense of the inverted reality. Would this mean that one needed to keep a scorecard handy; a careful check of ethnicities already helped before venturing into the next home? And if it turned out that next home would violate the proper ratio did that mean that family would have to be by-passed (and any other “ineligible” ethnicity) until the scorecard was properly balanced again? And if no eligible ethnicity could be discovered reasonably soon, would the rescuer have to “undo” whatever help was given?

Of course this would have multiplied the numerous complications flood victims were already dealing with by an inestimable factor, but the implications didn’t end there. It must be remembered we now live in a time when one’s personal identity is no longer defined by biology or any other physical characteristics. President Obama’s Justice Department has taken it as its personal mission to aggressively promote this idea even in public schools. It has just as aggressively pushed as a corollary—personal identity must be seen as fluid, each individual free to change that identity as often as desired.

Thus the daunting problem of trying to ensure one is not “discriminating” when trying to help folks in need is exponentially complicated. It would, of course, become necessary to record how each prospective “helpee” was self-identifying at that moment before rendering aid. Yet the ever-looming possibility that this person (or persons) might change their personal perception before the rescue was fully affected would mean the rescuer might still have been in violation. Thus the rescuer, acting with the noblest and most selfless intent and even keeping the most meticulous records, might still find him/herself coming under the full weight of President Obama’s Justice Department in its relentless drive to stamp out any vestige of discrimination.

This brings us to a few final thoughts personally directed at Mr. Obama. Mr. President, unlike some who doubt your sincerity when you profess Jesus Christ as your personal Savior, I choose to take you at your word. But I do confess I have never quite understood how you manage to reconcile your political ideology with the Judeo/Christian worldview. I can only imagine you feel the compassion promoted by your ideology is in essential agreement with all Christ taught and modeled. I suppose there is something to that. But I don’t recall Jesus ever defining compassion in the way your ideology seems to. While Jesus certainly did stress the need for concern over the less fortunate, He consistently emphasized salvation from personal sin over salvation from physical circumstances (within the context of normal every-day life of course). In fact, His teaching implied that physical circumstances are often the result of sin, though of course not always.

Your ideology, Mr. President, has consistently whittled away at the concept of personal sin; preferring to view personal circumstances as the cause of negative behaviors. Because Jesus came specifically to save from sin, your ideology leaves Him with no significant role. But removing the Savior’s role means sin continues unabated, which in turn, leads to the proliferation of sin’s effect. It is precisely this effect, Mr. President, to which you and those of your ideological bent have worked tirelessly to assume the role of that Savior you have, by an endless array of policies, systematically denied those who need Him most.

Mr. Obama, we do not doubt you sincerely believe the policies you pursue, no matter how disconnected from the real world they may seem, will at some point elevate all humanity to a higher station. Yet as a Christian you would be well aware of perhaps one of the most vital challenges Christ leaves His followers—to live the self-examined life. No other way of life calls its followers to such an exacting demand—to honestly assess our motives and actions in the most sobering and unflattering terms. It is a call to be willing, after a careful examination of all the evidence, to let go of even some of our most cherished assumptions simply because they do not measure up to Christ’s standard. There is no place in the self-examined life for a refusal to recognize that no matter how sincere, we just might be wrong.

Mr. President, as a follower of Christ, do you ever have times of doubt, wondering if all the things you were taught from your earliest memories by revered mentors were really true? Could it be they all, perhaps, were merely passing on assumptions that were also taken almost entirely from the world of theory that conveniently fit human beings into one-dimensional molds?

This brings us back to the Louisiana flood. We can appreciate it would have felt unnatural for you to acknowledge and praise in some sense the spirit of mutual cooperation among all ethnicities during such a harrowing time. This could have undermined the narrative of your ideology that insists deep divisions among groups are the natural state of things and only its prescriptions can heal that divide. Yet, Mr. President, perhaps this is the very point worth examining.

If within the secure confines of your golf course the first thing that came to mind to most effectively impart all the inspiration and compassion of your ideology was to emphasize the very worst in humanity, when those to whom your words were directed and who were trapped in the very midst of tragedy were exemplifying the best, perhaps the time has come for you to question the essence of that “compassion” you have embraced. Maybe serious soul-searching would bring you to some important realizations about a lifetime of faithfulness to your ideology. Mr. President, what if it has had the opposite effect of all you assumed. Could it be that, bit by bit, it has been sucking from your soul the very sense of humanity you have so tenaciously sought to champion and leave as your legacy?