Louis Farrakhan Says America is “Most Rotten Nation on Earth.” 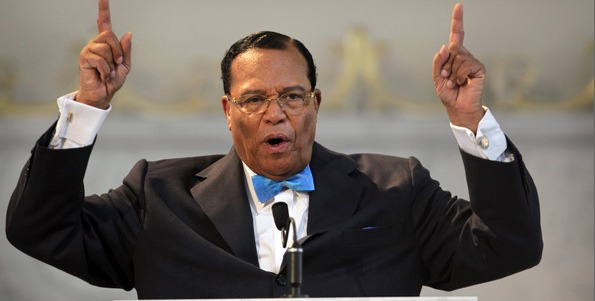 Louis Farrakhan, who is both a Democrat and a leader of the Nation of Islam, stated, “No, you’re not as good as Mr. Putin or Russia, ’cause the judgment of God is not on Russia, the judgment of God is on America. You are the most rotten nation on the Earth. That is why God has come, and you are number one on His list to be destroyed.”

Coming from someone who believes in a cult that was founded by Mohammed, your words are utterly profane. Your so-called god along with your unholy Quran indicates that allah allows pedophilia, rape, torture, and murder of the unbelievers. Allah is also perverse in proclaiming a terrorist martyr will be awarded 72 virgins for the killing of infidels: men, women, and children. He allows male muslims to beat, torture, and kill his women for any disagreement with him.  Pedophilia and rape among children even within their relatives is permitted. The belief that members are allowed to lie, cheat, torture, and slay any non-muslim is also a manifestation of this sinister cult.  These are not tenets of a just and holy religion.

Liberals say that this type of activity is only practiced by the radicals and the muslims are an honorable and peaceful people, but their so-called holy book, “Quran”, actually contains these words as the tenets of their beliefs. I feel pity for the amount of pain that was brought to bear on their follows by torture, but they must break their chains and realize that allah is not God.

There is absolutely no question that allah was worshipped by the pagan Arabs as one of many polytheistic gods. Allah was worshipped in the Kabah at Mecca before Muhammad was born. Muhammad merely proclaimed a god the Meccans were already familiar with. The pagan Arabs never accused Muhammad of preaching a different allah than the one they already worshipped. Mohammed then wrote the Quran patterning it after the Bible (the Torah scrolls of the Hebrews and new testament of the Christians). He modified the wording and changed the meaning of most of the Biblical verses and added his own ideas to make it more acceptable to the pagan Arabs.  Mohammed wanted power, total subservience, and acceptance of his behavior…..not the salvation of souls.

So you, Mr. Farrakhan, can take your blasphemous words and join the devil you call Shaiton or Iblis with your combined chants. Jesus Christ will come again to the wailing and gnashing of teeth of those who failed to accept Him as the Son of the True God and will sort through the masses to select the faithful for rewards in Heaven leaving the non-believers to the devil they followed.