Lock Her up! The Campaign to Prosecute Hillary for Corruption 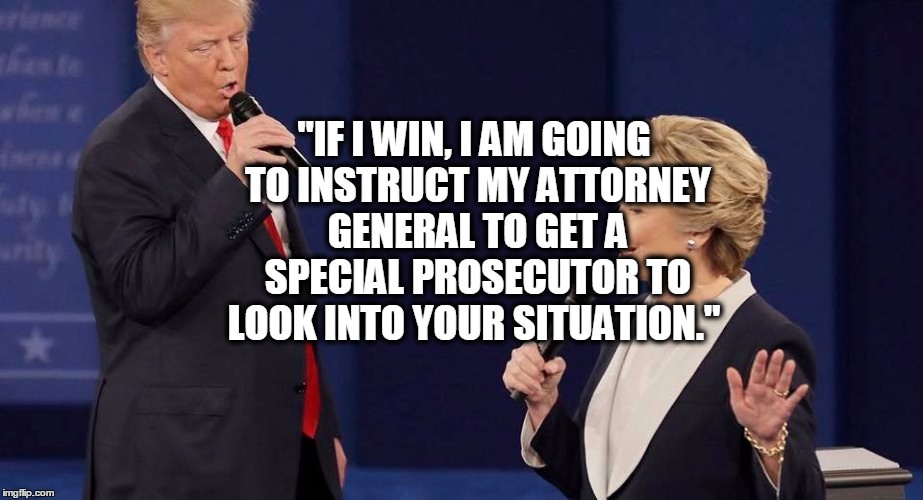 Hillary and her husband have escaped prosecution for their crimes thanks to the corruption rooted in the Democrat Party.

Republican Donald Trump is campaigning for the justice system to do more than give Hillary a pass on her violations of National Security.  FBI Director Comey said he would not recommend the DoJ to move forward with prosecution of Hillary for “lack of evidence of intent.”  This bogus excuse may fly with her corrupt left-wing supporters, but it does not with those who obey the law.

At one town hall event, a former sailor questioned Hillary saying that if he had been investigated and committed the acts that she had, he would have been thrown in jail.  As anyone caught speeding knows, ignorance of the law (or that speed limit sign you passed) is no excuse.  But the fact is that there are numerous signs of intent such as; installing a secret server through which to send emails without government oversight, her staff destroying electronic devices with hammers, and using digital shredders to destroy hard drives and render them unrecoverable after being subpoenaed.  This is no different than Hillary negating Attorneys General from filing prosecutions of her husband for his sexual assaults while in office as governor and president.

Liberals call this threat that of a banana republic dictator.  This is from the leftwingnuts who laud Obama for saying global warming deniers should be persecuted.  Trump would have massive evidence with which to prosecute Hillary just as Nixon was prosecuted.  Corruption at the top cannot be tolerated.  Two-faced Hillary, who says Lincoln was two-faced also, wouldn’t know honesty if it hit her in the head, but Trump just might if Americans are smart.  United States laws are not those of a banana republic, but Democrats would certainly exercise them as if they were by persecuting those who disagree with their rule, and dodging prosecution for their own crimes against the people.

Krauthammer on the wrong side of the issue

Krauthammer says, “In this country you don’t put political losers in jail.”  Tell that to Scooter Libby who was railroaded for something he didn’t do.  Tell that to Rep. Tom DeLay (R-TX) who was falsely prosecuted, forced to resign, and spent ten years fighting to clear his name.  Democrats prosecute Republicans on false charges all the time, while their people commit crimes like Reps. Charlie Rangel and Barney Frank and President Bill Clinton and they re-elect them.  America doesn’t just throw political losers in jail like a banana republic, but we do prosecute corrupt political criminals and put them in prison in accordance with the law – unless you’re a Democrat in which case banana republic style works well.

We are a nation of laws and even the president is not above the law, especially when corruption reaches the highest levels of our government.