Some Lives Matter and Some Don’t 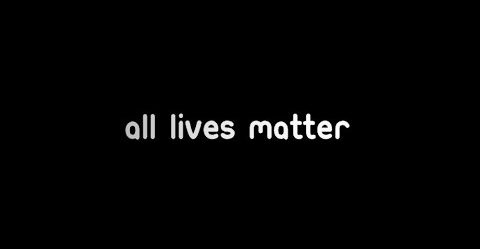 This racists mantra of some rights are more important because of skin color or profession is simply prejudicial garbage. For people who have an ancestry of racism you would think they of all people would recognize the injustice of racism per se. For people who rely on police to protect them and pay for this protection you would think they too would recognize the injustice of targeting cops. You would think someone with the opportunity of life would rejoice in this and work toward enhancement instead of destruction. In a rational world you would think and so would others. Instead we have a world where ideas are not examined and considered ,but simply equated with imagination and emotional responses. The resulting death is the culmination of this nihilistic approach. It manifests itself in the imagination and emotions the Jihadists and the thugs of Chicago. It manifests itself in the political arena of sacrificial foreign policy and in the fraud of political candidates. Seeking power is a lust for control and that translates to destruction either by design or incompetence or both.

A person who thinks they cannot control reality but can control men ,feed on this lust. However, reality has iron cast rules that must be obeyed. Gravity cannot be denied. The requirements of life cannot be denied. Only by recognizing what is real and what is imaginary can one distinguish the two and act accordingly. Thinking your imagination can distort reality is a fool’s game best exemplified by the fool’s in Congress who pass laws that distort markets, invade the requirements of human nature and spend endlessly to remedy what can only be corrected by not spending and not confiscating.

There are lives that matter but it has nothing to do with physiological or professional status. They matter because they recognize individual rights and act accordingly. Which means they do not violate individual rights or advocate that others violate individual rights. This simple rule is what founded the United States and for over 200 years made it the most peaceful and prosperous nation ever. Abandoning this precept has led us to sanctioning ideas and movements that are contrary to this founding principle. How else can you explain such obvious racism as “Black Lives Matter” indicating a preference for skin color over character? How else can you explain “Blue Lives Matter” without indicating a preference for certain professionals? Do not all lives that advocate the protection of individual rights and abide by this, matter?

There is no reason to consider a life of a thug or criminal matters. It matters only to the extent they reject the violation of individual rights and embrace the concept. No one is safe from those who advocate or violate individual rights. To say a person who violates individual rights should be exempt because of his skin color is a return to racism and injustice. This theory is being whispered by the politicians and erupted in the chaos of Ferguson and Baltimore. This theory is being shouted by the Jihadists and erupted in San Bernardino and Orlando. It is a theory that has been promoted in Hitler’s Germany and Stalin’s Soviet Russia. The particulars may be different but the overall concept is the same. It all dwells on the ignorance of the sanctity of individual rights. For individuals to be so uniformed and crass on the most sacred concept that gives them a chance to live in a world displays how chosen ignorance is a human frailty that is self destructive for lives that matter.