Listening to the Children 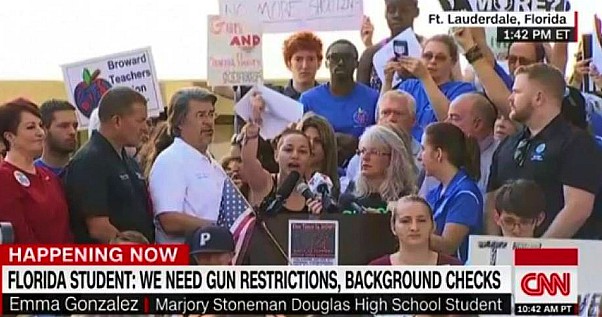 I just watched some of the Florida students, victims of the latest School massacre, speaking in Tallahassee, Florida. The Legislatures did not let them into the hall so they spoke publicly outside. STRONG AND TO THE POINT!!

Intelligent words, not just teenagers ranting and spurting out. They have spoken the absolute truth. Do you think the Nations leaders will listen?

I especially like the many references to support for the people, not political factions. Several adults have been saying this, but not one Politician listens or has the courage to speak up. They all just go along with the Party; like a bunch of cowards and “wusses”!

Our Representatives are not there for us. They are there for the financial and power aspect of their actions.

Right now our Country consists of two Dictators, one called Democrat, and the other called Republican. The only choice we have is what Dictator we want to control us. Vote for the person, not the Party.

I must add that I have one reservation; and that is the reference to the NRA. This Nation is a Country of Entrepreneurs, a Country that exists as a free Nation whose citizens are able to work and earn as they please. Were it not for the freedom to have guns we would still, possibly, be under the rule of another Country, or perhaps a single Dictator.

The NRA has no control over WHO buys their guns, thankfully, but the Government does. They can control the size and power of them. And they can strictly control the requirements of those who buy them.

Our Laws should also be very strict concerning the punishment for the use or possession of illegal guns.

“Stop and Frisk” was not popular, but it was effective. Yes, some cultures were targeted; but those cultures comprised the majority of people imprisoned. Political correctness does not solve problems. Profiling does.

It is time for ALL cultures in the The United States to toughen their skin, lose the selfish attitude, and throw away the sensitivity and arrogance that has taken over our daily lives.

AND THAT IS MY OPINION!