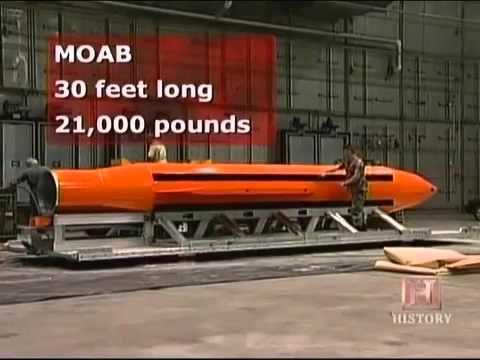 Get it? Because the MOAB is affectionately known as the Mother of All Bombs.

The GBU-43/B Massive Ordnance Air Burst, or MOAB, is as much fun as it sounds – unless you are the enemy.

Weighing in at 22,600 lbs., and 30 feet in length, the MOAB is the largest conventional (non-nuclear) air burst ordinance on the planet. Technically, it’s not the “largest” in our arsenal. That distinction is owned by MOP, the Massive Ordinance Penetrator, which weighs in at 30,000 lbs., and is capable of “penetrating” 200 ft of reinforced concrete.

In other words, it matters little to us where you bags of dirt choose to hide. We don’t need nukes to root you out. And unlike his predecessors, we finally have a President with the stones to utilize the tools provided him. Hopefully it won’t be the last time we hear of such a bomb being used.

Depending on the altitude of detonation of the MOAB and the landscape below, the bomb can have a blast radius of up to a mile. That, for a conventional weapon, is devastating – not only for the sad-sacks below it, but for everyone monitoring from afar – like our adversaries.

The design of the air-burst bomb uses concussive force to break things and kill our enemies. Unlike other conventional bombs, the MOAB has an extremely thin aluminum skin, so the housing doesn’t impede the blast wave energy emitted from within. The blast wave can easily breach tunnel entrances, traveling long distances into tunnel networks, destroying anything in its path.

It’s so large (and heavy) that only three aircraft are capable of comfortably accommodating it – the C-130, B-52 and B-2. This particular bomb was dropped from the rear of a Air Force C-130 Hercules atop an ISIS-Khorasan tunnel complex located in Nagarhar Province along the Afghanistan, Pakistan border.

At times, I’ve been tough on President Trump, but this sure isn’t one of them. One of our own, Green Beret Staff Sgt. Mark De Alencar, was recently killed in this area. I’m guessing this will serve as a pretty powerful warning to tread lightly when thinking of engaging Americans again.

And I’m sure this was not just a wake-up call to ISIS alone. Everyone of our enemies, from North Korea, to Iran, China and yes, Russia, has undoubtedly taken notice. This, in my humble opinion was purposeful and genius. Everyone is talking about it – reporting on it. The only thing we’re lacking at this point is real-time surveillance of before, during and after. That will be the icing on this delicious cake.

Thank you Mr. President, for reminding us and the world, that you don’t “F” with the United States of America.

Below is video of a MOAB test explosion from 2003 (yes, its been around and unused, for that long) and an explanation of the ordinance.