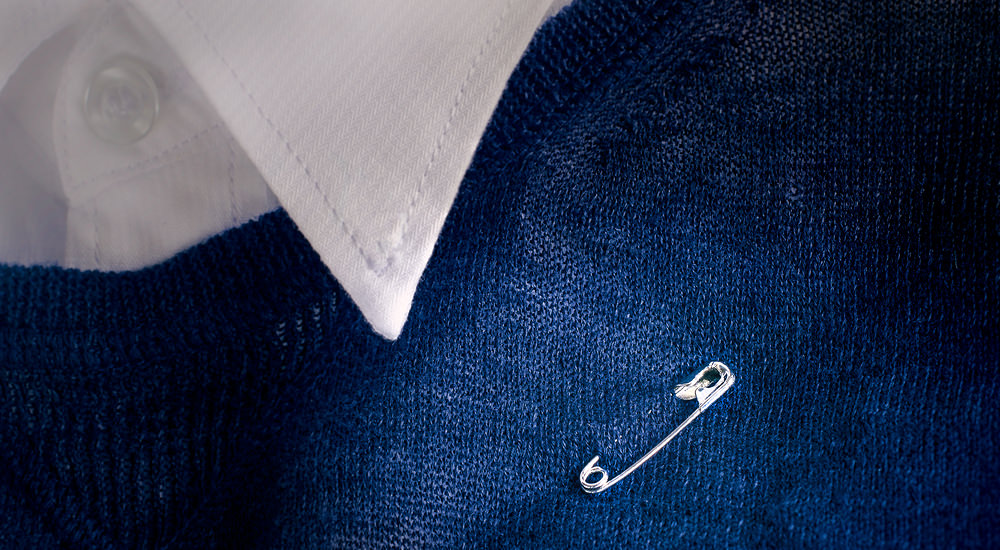 Wearing a safety pin, the symbol of solidarity among people, began in Britain following the Brexit vote earlier this summer. It has since been taken up by the left in America supposedly to show unity with immigrants here. As with most people of light intellect, liberals follow the lead of others. There can be no original thought, only allegiance to a figures considered superior.

The safety pin quickly gained popularity for its ability to hold fabric together in such a way that there was no sharp protrusion. The small tool was smooth and rounded and presented no threat. It was safe! It became the most useful instrument for holding diapers on infants who were incapable or had not yet learned to control and provide for their bodily needs especially their evacuative systems.

I find it comically ironic that the “progressives” use this symbol to non-verbally express their whining and need for coddling and protection against the realities of life which they cannot yet master. In addition to seeking like-minded babies who can only coo amongst themselves in empathy of soiled garb, these delicate infants also wail against life outside the ideal warmth and shelter of the womb.

These are the people who exuberantly celebrate what they consider victory; that which makes them “feel good” or upon which they all find unity. They are the same people who willfully and wantonly destroy public and private property when the don’t get their way much like the attention demanding suckling (if you don’t take care of my needs, I’ll be loud and make your life miserable).

As they riot, damage and destroy, they give little mind to the fact that the conduct of their protest(s) not only belittles their cause, it takes resources from the coffers that might serve to effect their desired outcome. E.g. Jobs are not created in Detroit by burning down the very establishments that offer work. Or, randomly killing police does not protect one who rapidly withdraws a cell phone from their back pocket when approached by an armed law enforcement officer.

Today there is Velcro. There are magnets and other methods of attaching or combining two or more items. The safety pin, while protective when securely fastened, can be extremely painful if mishandled. Why have the pastel progressives chosen such potentially dangerous item to illustrate their fragile existence? Could it be because some other unthinking person popularized it?

To use their communal culture against them, I quote the lyrics from the 1967 Youngbloods, “Come on people now smile on your brother, everybody get together, try to love one another right now”.

The election of Donald Trump is no more the end of our nation than that of Barack Obama was…or for that matter what could be if Hillary Clinton had won. The future might even be better. Let’s give peace a chance and ride out the next four years together as we have the current administration. If it turns out to be a disaster and pricks you, we’ll have another election in four years. That’s your safety pin.