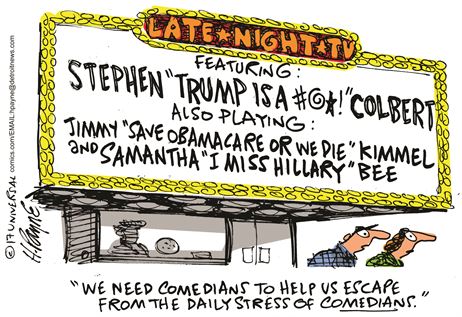 Is Donald Trump mentally unstable or has Trump Derangement Syndrome become a liberal pandemic that is affecting their own mental capacity to make judgements about others so much that even their jokes are no joke?

The question here is not the mental health of Donald Trump, but the mental health of the liberals who judge him.  Jesse Watters interviewed a psychologist who started a group he calls “Duty to Warn” the people about his diagnosed mental instability of President Trump.  Like all liberals, however, once his hypothesis comes under question he falls flat on his face failing making his case.  He misinterprets an open thought process and learning curve with indecisiveness, and sees aggravation with leftist smears as an intolerant temperament.

This fool says he didn’t even know Barack Obama declared his election would heal the Earth and cause the rise of the sea levels to slow.  That statement was in his Inaugural Address, and if that isn’t delusional what is?!  Liberals do not, by definition, think lucidly let alone functionally because liberalism is born of ignorance and bred on immorality.  This liberal psychologist knows no more of Adolf Hitler than what he was told about him being a genocidal maniac, and has no understanding of Obama’s narcissistic megalomania than he does of Donald Trump’s business genius.  In comparing the Business Tycoon vs. the Community Organizer when they are given power you don’t hear President Trump saying he has a pen and a phone to bypass legislation.  Obama used his executive power to shut down coal mining that is desperately needed to power American electricity.  President Trump signed an order halting Moslem immigrants from terrorist saturated countries in accordance with the law that gives him that sole prerogative.  Liberal judges put stays on his orders in violation of that law.  When Trump announced he would uphold immigration laws that forbid illegal border crossing a judge put a stay on that saying that, though he has that right, it would upset liberals therefore he could not, thus writing his own law from the bench.

Yet these deviations from law and reality don’t stop liberals from believing they have the capacity to learn psychology and diagnose Donald Trump as psychotic.  Just because someone can function in society does not make them a mature, reasonable, functional human being.  Criminals function very well while they are sociopathically destroying others.  Likewise, this psychologist may have a practice, but that doesn’t make him right let alone capable of judging another.  Liberals always come to the wrong conclusions based on their misunderstanding of the facts.  Leftists are brilliantly dumb.  They claim to be intelligent and enlightened, but if you challenge their beliefs on the basis of facts they will either deny those facts because they cannot refute them, or they will resort to name calling because they are proven indisputably wrong!  Leftists have no justification when they call conservatives stupid, heartless, or illogical because they cannot present any argument as proof.  Just like they claim Putin cheated with Trump to steal the election, but there is no evidence of any tampering to be found.  But they say they’ll keep looking for it, which is like saying they’ll keep sending men to the moon till they find proof it’s made of cheese.  At the same time they deny that Obama put the Trump campaign under surveillance even though there are dozens of reporters who bragged about getting leaks proving he did!  That’s why debating liberals is so much fun as you watch them writhe and meltdown till they demand their safe space.

Professor claims Spencer lecture on Islam weak on logic, but can give no facts

The problem with the leftist liberals of today is that they are descendants of the drug addled Hippie culture of the 1960s.  Hippies tried to be their children’s friends instead of their parents because they learned from Communists not to learn from their parents.  Now they have become so dysfunctional that they get their news by listening to comedians who espouse stupidity through mockery rather than through knowledge.  There are millions of people to this day who believe Gov. Sarah Palin actually said she can see Russia from her house.  Leftists say they make jokes, but they’re about as funny as cancer.  Like the greatest actors of Hollywood, Charlton Heston and John Wayne, the greatest comedians are Christian conservatives like Red Skelton and Bob Hope.  When all of the audience is not laughing then it’s not a joke.  When all that these pretenders to comedy do is rant and rave spewing hate and bile through profanity laced invectives they are not performing comedy – unless you think kicking puppies to make children cry is funny.

Leftist’s jokes are as funny as cancer

The quality of Donald Trump compared to Barack Obama is obvious and easily proven.  If you want the measure of a man look at the quality of his children.  Donald, Jr., Ivanka, and Eric are pillars of their communities and business successes in their own right.  They are not drugged up vagabonds like leftist’s children hating themselves and the world.  They are not stealing to build their wealth, but conducting business, building, trading, and prospering.  Donald Trump is not demanding he be paid more by the taxpayer as Obama does.  Democrats who created the congressional and presidential pension systems to live off of taxpayers when they already entered office rich are the real thieves.

The only people that need a mental examination are the leftist haters who say Republicans want to steal from the poor and kill children, while claiming they are anti-fascist as they commit acts of fascist terrorism.