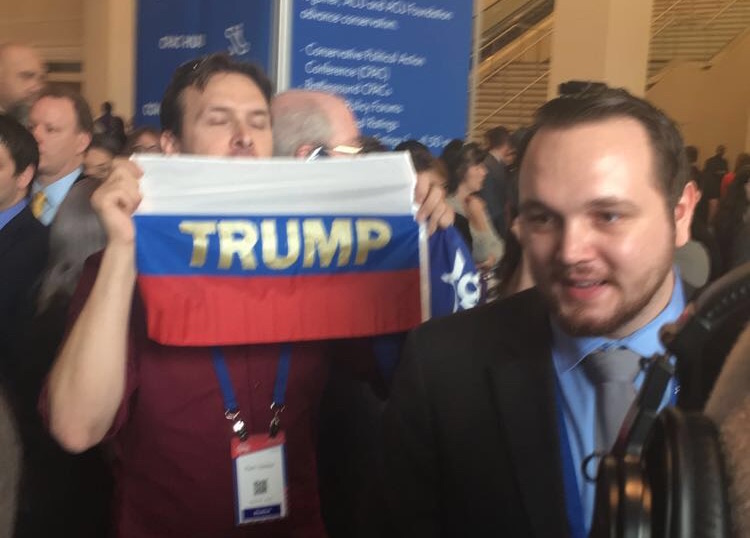 Liberals who create fake news infiltrated CPAC to put Russian flags into the hands of ignorant people to create an optic that conservatives and the Russians are working together.

In order to propagate their story that Russia helped Trump win the election and cheated Hillary, that Trump is illegitimate and anything he does can be undone by decrees of the next Democrat president, leftists are infiltrating the Right in order to create propaganda for their rabid base.  The leftist paradigm says the far left are Communists and the far right are Nazis, which makes their association of the Right with Communists a joke.  Then there are the NeverTrumper conservatives who have gone so far Right that they have ended up on the Left, which is why Rush Limbaugh says the Right/Left Paradigm is a circle.  But no one can go so far left that they end up on the Right.

What is conservatism in the age of Trump?

Right vs. Left: The True Paradigm

As President Trump stated at CPAC he is not at war with the media, but denouncing fake news.  The leftwing liberal Democrat media took out the word “fake” to construct a fake story of Trump tromping on the 1st Amendment.  Leftists are so dense that they believe anything the leftwing media tells them, especially since the vast majority of them get their news from comedians who mock all things conservative.  That there are NeverTrumper conservatives agreeing with them exacerbates the situation.  Funny how those “conservative purists” who are now allied with the Left still believe themselves to be conservatives.

NeverTrumpers are the self-righteous who would have elected Hillary

The leftist media are the Democrat’s propaganda machine that will manufacture anything to smear Trump and the Republicans just as they did the TEA Party claiming they were the KKK.  Thinking Americans must be more aware than those duped at CPAC to wave Russian flags handed out by leftist infiltrators.  The Left will do anything and everything to sabotage and undermine the Trump administration.  They don’t want America to be great again, but to become their socialist banana republic.