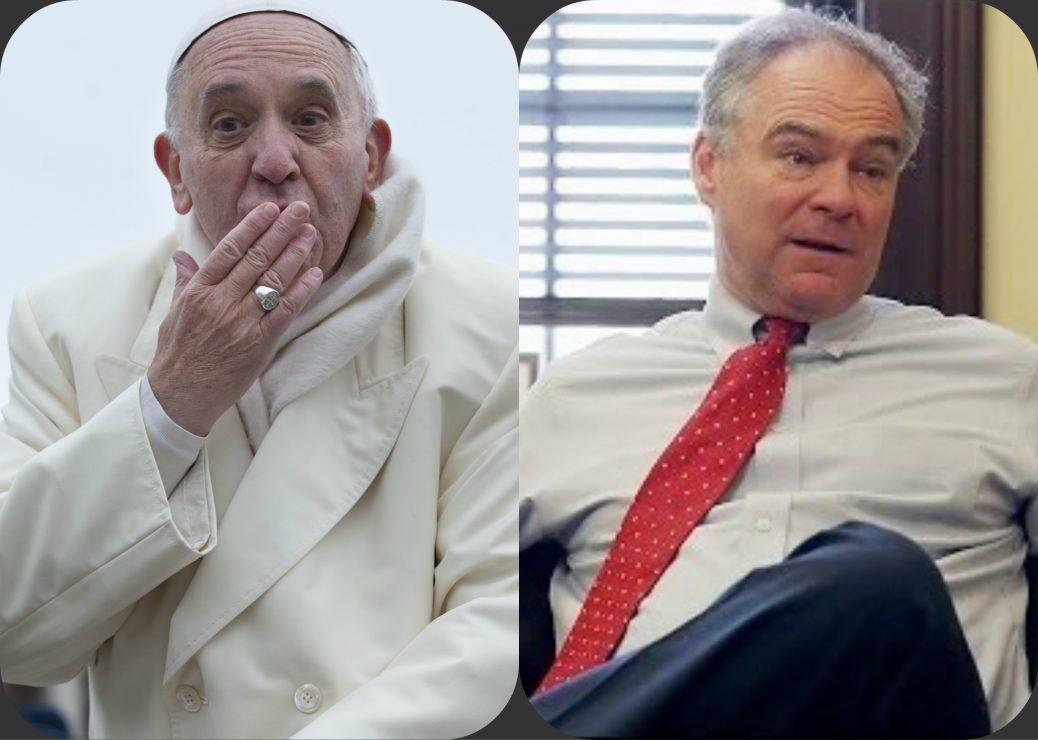 In this week’s previous articles on Jesuit Pope Francis, Marxist socialism and Masonic “universal brotherhood” – and anti-fundamentalism against all Christian fundamentalists – are now revealed as rampant. Indeed, as unlikely as it appears, Canadian Prime Minister Justin Trudeau and Pope Francis appear to have the same script writers.

ELAINE QUIJANO: All right. I’d like to turn to our next segment now. And in this, I’d like to focus on social issues. You have both been open about the role that faith has played in your lives. Can you discuss in detail a time when you struggled to balance your personal faith and a public policy position? Senator Kaine?

KAINE: Yeah, that’s an easy one for me, Elaine. It’s an easy one. I’m really fortunate. I grew up in a wonderful household with great Irish Catholic parents. I was educated by Jesuits at Rockhurst High School in Kansas City. My 40th reunion is in 10 days. And I worked with Jesuit missionaries in Honduras, now nearly 35 years ago, and they were the heroes of my life.

Clearly, Pope Francis and VP candidate Tim Kaine are Marxist multiculturalists. Their brand of socialism is dedicated to de-nationalizing and de-stabilizing – indeed, de-Christianizing – America and the entire globe for world government.
In his landmark book, The Jesuits, author Malachi Martin documented the rise of the Jesuitical liberal left in the Catholic Church.  Martin, a former Jesuit insider, revealed a major infiltration was underway at least by 1965.

In the 21st century, it is vain to argue and claim a difference between Jesuitism and Roman Catholicism proper, as the latter is now sucked into and amalgamated with the former. Differences do exist, but in the context of a Catholic “rear guard” and of “traditional Catholics” who some scholars say are fundamentalists and therefore condemned by Pope Francis earlier this week. (See Archives: “Pope Condemns Traditional Christians”)

Russian occultist Helena Petrovna Blavatsky with her Lucifer Publishing was the ideological forerunner to Russian occultist Saul Alinsky, who dedicated his community-organizing Rules for Radical to Lucifer. This is subscribed to by President Obama and VP candidate Tim Kaine. But is it possible this “pope” also is in this behind-the-scenes category?
Alinsky-influencing Blavatsky wrote, “The Jesuits have practiced not only Occultism, but Black Magic in its worst form, more than any other body of men; and that to it they own in large part their power and influence.” (H.P. Blavatsky in Lucifer, June 1888) In the same article we discover, “A brother Jesuit has the right to kill anyone that may prove dangerous to Jesuitism.” The article concludes by calling the Jesuits an “army of black dragons.”

The Catholic Campaign for Human Development – infiltrated and dominated by atheist-socialist radical Alinsky – is overrun with like-minded liberal and multicultural Jesuits.

As we see Obama owned and ruled by the Jesuits “Kitchen Cabinet” – this Jesuit ownership and anti-fundamentalism will intensify, should Tim Kaine be elected Vice President of the United States of America.