Liberals Justify Their Hatemongering as Righteous, even as ‘Jokes’ 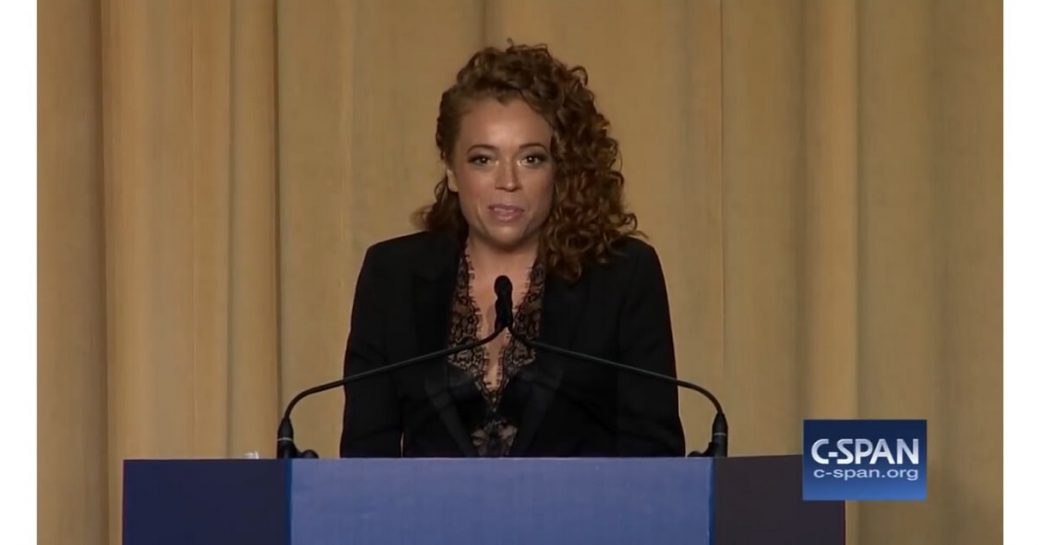 This weekend’s White House Correspondence Dinner put on full exhibition the hate and poison by the Left against Trump and righteous voters.

Liberals believe they can justify anything, including their bile spewed under the guise of comedy.  Saying that Republican women are ugly, and that they wish Trump was dead is so funny!  These are the people whose complete lack of a moral compass even allows them to justify genocide in the insane belief that killing off half the population would make life idyllic for the other half.

Having a free press also means that they are free to lie, to create fake news, to slander honest people as liars and smear righteous people as evil.  It is up to the consumer to use their moral compass to recognize the lies and to weed out the smears from the hateful.  But as Hitler proved with his Big Lie campaign;

“If you tell a lie big enough, often enough, eventually it becomes the truth.”

George Bush didn’t retaliate against the thousands of lies told about him and it resulted in his presidency being so demonized that people elected a Moslem socialist dictator to rule over America for eight years.  This is the proof that the majority of people are not smart enough to weed out the lies from the truth.  Republicans like Bush who thought it was “undignified” to acknowledge the insane rants of leftists, and wouldn’t denounce Democrat lies because they thought people were smart enough not to fall for them, are to blame for this moral decline.  Instead they let them proliferate until their lies became the truth.  The result is that there are Democrats today who believe a multitude of fictions like: CO2 from cars will end all life on the planet in the next century; that Sarah Palin said she could see Russia from her house; and there are actually liberals who demand that Trump should seek a treaty with the King of Wakanda to share their ultra-advanced technology to bring peace to the world.  Thank God Donald Trump is a real man who will stand up to the bullying of leftist hatemongers and throw their lies back in their faces.

Leftist comedians are not funny.  They spew lies and hate and mockery as their comedy in order to warp people’s minds and turn them against righteousness, truth, justice, and the American Way.  Their goal is to advance the anti-American hate of the Left and promote their globalism in which Christianity is destroyed and socialism is imposed on the world.  The problem with socialism has always been that it is not the ideology of liberty and fairness that propagandists pretend, but the ideology of slavery and genocide.  Without a moral compass or any learning of morality or ethics, liberals believe such slavery and genocide to be beneficial to making the Earth into their Utopia.  Liberals who learn neither history nor morality do not have the first clue that they are being taught to be mass murderers who are justified in killing anyone they dislike.  Is it any wonder with such teachings that there are hate filled teenagers going into schools to slaughter other students?  Is it any wonder why they don’t understand that Islam is not a religion of peace, tolerance, prosperity, and wisdom, but a death cult of brainwashed fanatics?  Islamist jihadis who are taught to reject the morality and righteousness teachings of Christ because of the closed-minded teachings of their Imams are no different than socialists who reject God.  That is why the two will ally against Christians just as the Nazis and Communists did against the capitalist West in WWII, but will likewise eventually end up at each other’s throats in WWIII.

Righteous Peace vs. the Fallacy of Leftist Peace

The Marvel movies have been gems of moral righteousness.  Even so, the latest two movies, Black Panther, and Avengers: Infinity War, have brought out liberalism’s dysfunctional ideology that leftists committing genocide can be justified.  In Black Panther the leftist hatemonger, Erik, is raised in America and wants to wipe out white people.  Though the film rightfully depicts T’Challa as the righteous hero who stops him, Democrats take a different perspective from the film.  They see Erik as the righteous hero and regret that he loses the power of the Black Panther to enact his justice upon the world.  Likewise, in Infinity War they see the goal of Thanos as an ideal that justifies his genocide of half of all living people.  They believe that killing off half the people would actually result in peace and prosperity for the remaining half.  Such a myopic, childish, amoral philosophy is what led to the genocides of Hitler, Stalin, and Mao killing over two hundred million people in the 20th century.  Leftists propagandize that Hitler’s Nazis were far right evil and Stalin’s communists were far left evil, but that paradigm is proven false by the two men being on the same side.  That leftism is the evil of the world is proven by them both being socialist dictators who allied to invade and destroy other countries in WWII.  Liberals who don’t learn history which is why they don’t know this.  They only know that Hitler invaded Russia and that makes him the evil one.  Such lack of learning from history is why liberals think Nazis are rightwing, and that Christians are Nazis, and even believe such stupidity as that the KKK and Republicans became one in the same as white supremacists.

The problem with liberalism is that is born of ignorance and bred on immorality.  They do not learn morals and ethics because they reject the teachings of Christ.  They do not understand that there have been some corrupt people, leftists who gain position in the church, who use their power to corrupt.  Places like Westboro Baptist, Obama’s mentor Reverend Wright, and things like the medieval Catholic Church of the Inquisition are the exception, not the rule.  The medieval Catholics adopted the ways of Islam to whose brainwashed fanatics they had been losing wars for centuries.  But that turned them away from Christ until Christians rebelled in the Reformation.  Similarly, they are told cops are killing blacks because they are the racist militant arm of Republican’s KKK, not because young black men are twenty times more likely than any other demographic group to be violent criminals.  They justify black criminals as fighting back against oppression even though Republican civil rights legislation ended a century of oppression by Democrat Jim Crowe laws.  But do you think Democrats today know any of this?  They only believe what Democrats tell them to believe.  Racist cops exist, but they are the rare exception.  While corruption in the police sometimes occurs, criminals are always corrupt!  Democrats praise the denizens of cities as enlightened and sophisticated, ignoring the masses they have in their ghettos who are poor and uneducated that they enthrall as welfare voter slaves.  They see the working people of the middle class living in suburbs as “flyover country” that is to be avoided.  They think such people are backwards and uneducated hayseeds who foolishly believe in the morality of Jesus as a bunch of flat-earthers clinging to guns and fantasy gods.  It is liberals who foolishly believe in having government, and criminals who live by the gun, destroy their enemies that think they will be left to live in peace.  Even if all people of an opposing ideology were destroyed there would be those born in the next generation that would take up their torch, for good or evil, to become either the givers and share with others or the takers who steal from others.  Those are the essences of righteous morality and immoral leftism that liberals do not learn until it is too late, and then wonder how they woke up one day to find they have become slaves.

Leftists like Jimmy Kimmel scorn Republicans whom they slander, insult, and demean telling those who are angry at their nasty treatment of Sarah Sanders should just get over it cause it’s in the past.  Well, tell liberals like Kimmel that he can take his liberalism and shove it up his a**.  Liberals should be impaled on stakes until the sh*t from their brains actually comes out of their mouths physically as it always does verbally.  That’s a joke.  Wasn’t it funny, Jimmy?  Even if you killed us all off your own children would eventually rebel against the slavery you impose on them in your Utopia.  It would be your own children who are the ones that would skewer you.  Now I don’t care who you are, that’s funny!

Conversation with a liberal over Infinity Wars

Liberal “comedienne” smears Trump and Sanders as a joke