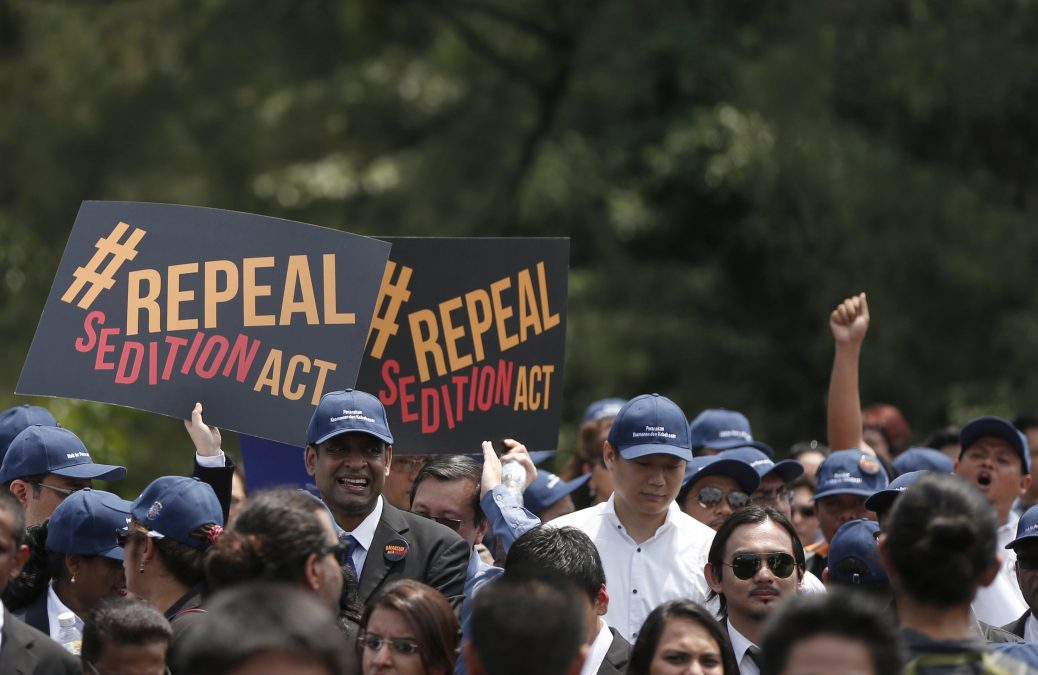 How are political “leaders” in the United States allowed to be openly seditious, and get away with it? By examining the legal definition of sedition, it is clear that establishment politicians and mainstream media outlets are in violation of this law. CNN, MSNBC, ABC, CBS, NBC and many other liberal-leaning media outlets and websites have been blatantly lying about President Donald Trump, and they have also called for his overthrow and/or impeachment. They are, by very definition, carrying out a seditious conspiracy to oust Donald Trump.

It is my opinion that President Trump is playing nice so that he doesn’t seem to the people as if he is some authoritarian; however it is high-time that these criminals begin being held accountable for their actions. University Professors, establishment politicians, Hollywood actors/actresses and many other left-minded and prestigious people have come out and openly called for the overthrow of President Trump and his administration.

“The fourth possibility is one that until recently I would have said was unthinkable in the United States of America: a military coup, or at least a refusal by military leaders to obey certain orders,” said Rosa Brooks, Georgetown University Professor at the New America Foundation.

“WAKE UP & JOIN THE RESISTANCE. ONCE THE MILITARY IS W US FASCISTS GET OVERTHROWN. MAD KING & HIS HANDLERS GO BYE BYE❤❤❤❤,”said Sarah Silverman, a Hollywood actress.

“I hope he’s not there for four years. I hope that this man and who he is, the way that he has defined himself, the way that he is acting—I am hoping that we are able to reveal all of this. And my greatest desire is to lead him right into impeachment,” said Maxine Waters, Democratic Congresswoman from California. Waters has also made outrageous claims of President Trump having connections to the Russian government, but literally in the next breath implied that Vladimir Putin is invading…Korea?! The way she stated this was as if it was a question, and as if she was making up everything she was saying. Waters also called Trump’s admin “scumbags,” in a recent interview on live television.

If these were regular/everyday citizens, they would be in prison for sedition, however because they are leftists-liberals with some clout, they seem to get a free pass on their blatant crimes. If it were just these three individuals calling for the overthrow of a democratically elected President, it would not be much to worry about. However, there are leftists all over this country who are following the example of these seditious criminals and there are calls all over America to oust the Trump administration, with no legitimate reason I might add.

Americans should be demanding to know why these criminals are allowed to freely walk our streets and continue to spew their false narratives and straight-up lies to the American people. Trump’s cabinet is being delayed for a reason, and I believe that reason is to intentionally delay the Trump administration from having the power to come after these seditious criminals. Groups like Antifa and other radical leftists are running around America calling Trump and his supporters “fascists,” while at the same time they themselves, and their leaders, are acting fascistically.

President Trump, from a U.S. Army veteran and patriot of this nation, I humbly request that you end this seditious and traitorous behavior immediately before this currently cold civil-war in America goes hot. It will not be the fault of President Donald Trump, nor his followers, when the blood begins to spill. It will be due to the lies and fake narratives fed to the American people from these seditious criminals, which will spark the battle.