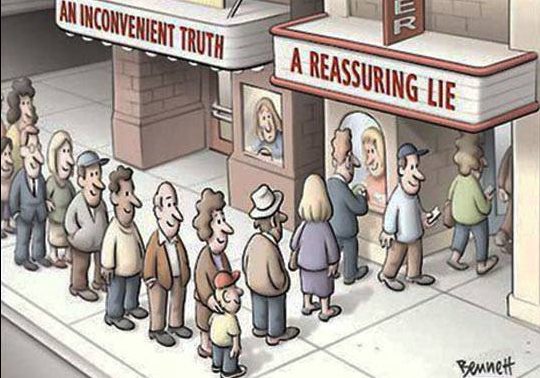 Liberalism is born of ignorance and bred on immorality.  It is an ideology whose foundation is in the cognitive dissonance of the leftist mentality.  If it exists the people know about it, but it takes a liberal to know about something yet have no understanding of it.  There is a special kind of arrogance that comes when immaturity and ignorance are melded with a little knowledge.  Liberals misunderstand most everything because they only acquire only partial knowledge before jumping to erroneous conclusions based on their dysfunctional logic.  Then they will argue that what you know is irrelevant because they think backwards from normal logical deduction choosing the outcome they desire and then justifying it rather than examining the facts to reach a conclusion.  They assume they know everything and you know what it does when you assume?  You make an ass of u and me.

“A little knowledge is a dangerous thing.” – Alexander Pope

Liberals believe wise old sayings are obsolete because they are old and outdated.  They reject the wisdom of elders who have already lived and experienced life because they cannot differentiate between the irrational logic of leftists and the wisdom of rational logic.  They lack the moral learning to discern between immoral desires and righteous thinking.  We are all victims of our own poor choices in life, but liberals would rather embrace and justify their bad decisions and wrongheaded beliefs than admit they are wrong and make corrections.  Simply put, in 21st century America becoming a moral conservative who leave their social liberalism behind requires growing up to act as a responsible adult.  Social justice warriors fail at life and they would rather drag down righteous Christian conservatives than face their own failures.

Jesus talks about embracing faith as a child.  He doesn’t mean to embrace life and act as a child, but to open your heart to accept God’s Love as children accept the love of their parents.  “…and a child shall lead them” does not mean we should follow the lead of children in making intelligent decisions, nor does it mean children know better than adults.  It means one should follow he who has simple faith in God and the Love of Christ.  When it comes to leading a righteous life, understanding good and evil, knowing the difference between right and wrong, one must learn morality.  Knowing good and bad comes naturally.  But knowing right from wrong requires knowledge, education, and experience.  Just because something is good doesn’t make it right, and something being bad does not make it wrong.  This is the most important lesson one must learn in life to be successful.

Here’s an abridged list of things that liberals miscomprehend:

Social liberals have learned to use their politically correct word police to stifle conservative thought and education.  Whenever a liberal curses you as a racist because you are for border security, or against allowing the death cult of Islam to spread, or reject high taxes to steal from the rich, or agree with using coal for power that they think will kill the planet and make poor people suffer; don’t argue with them because their minds are closed.  Just tell them to “blow it out you’re a**” and continue to do what you do.  Liberalism is not to be coddled, cajoled, or compromised with, but to be defeated.  It is not righteous to embrace what is wrong just because fools think they are right.  Leftists strive to rewrite history to make capitalism the ideology of stealing rather than socialism.  They paint Republicans as Klan racists who would enslave blacks rather than Democrats who created the KKK.  They cover up and conceal the crimes of leftists and blame the righteous for “making them do it.”  There are no redeeming characteristics to the socialist Left.  They must lie about everything they believe.  When they conduct political campaigns for your vote they must lie and speak as conservatives do saying they want a better, more prosperous America with more energy, better jobs, and greater opportunity for all when they actually want to transform America into a socialist banana republic.  If they told the truth about their agenda to bring about America’s decline by putting their iron boot on the necks of businessmen, force more people to be dependent on government, and suck up the wealth of the nation, people would run away screaming.  All Democrats have done for the past year is expressed their hatred for Trump and their contempt for his agenda to make America great again.  Rather than stand for American citizens as Trump is doing, they have embraced foreigner’s dreams of prospering at the expense of Americans and worked to block Trump from stopping people from entering the country illegally.  Now that it’s time to campaign for the midterms they want to express a new message by which to dupe Americans to vote for them once again by fooling them into believing that Democrats want a better America and not because they just want the power to steal from the rich for themselves again.  People fell for Obama’s vacuous “Hope and Change” in 2008 not realizing his change was to manage America’s decline and hope they could survive.  They were duped again in 2012 to move “Forward” with his leftist agenda to make America less.  It took his shutting down coal mining and openly putting an iron boot on businesses before most states awoke to his true nature and embraced Trump’s 2016 MAGA.  Now America is reversing course to turn away from the cliff that Venezuela took under Hugo Chavez, the most modern example of what happens to a prosperous nation when the people become so corrupt that they embrace socialist takers stealing from the makers, and the American economy is skyrocketing lifting the entire country.  Just as Chavez died a billionaire while the people became destitute, Obama Democrats made Washington, D.C. the richest region in the country rather than regions like Silicon Valley where innovation and commerce take place.  The Democrats slander Trump as an evil thief when all of his actions have been benevolent benefitting everyone.  Leftists by their nature cannot help but project their immorality on to others.  Being a social justice warrior is not promoting fairness or virtue, but advancing the cause of wickedness in the battle against the righteousness of Christian conservatism.

Liberals want to make the Moral Majority silent once more