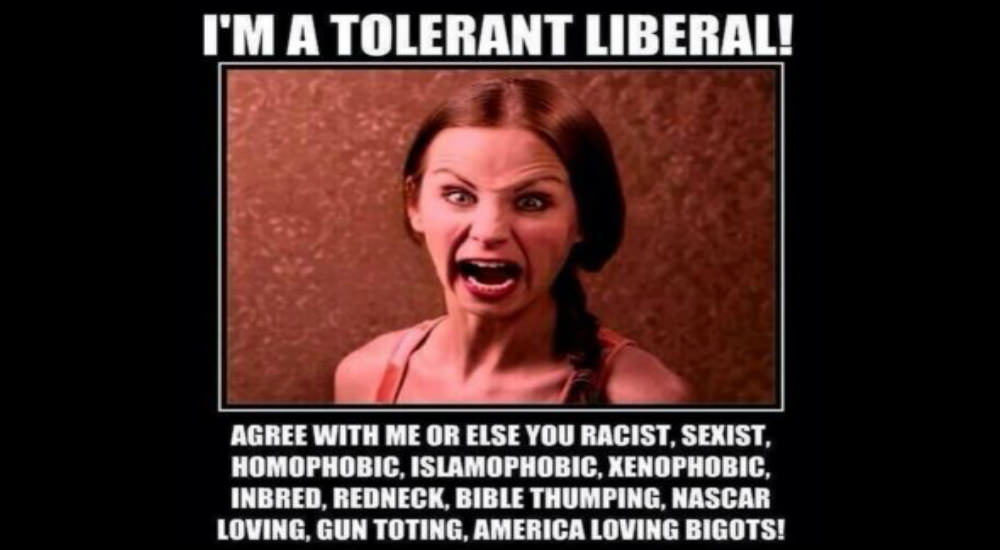 For years, the mainstream media coupled with celebrity apologists made a point of insisting that if you wanted to be included and accepted, then you needed to become a progressive Democrat.

They were the party that accepted gays, minorities, illegal immigrants, transgendered, handicapped, vegans, etc.. It was the “party of tolerance.” It was the “party of acceptance.” For a while, it actually seemed sort of true since most of those groups coalesced along party lines. There really wasn’t much to debate since the Left had managed to control those voting blocks.

However, over the past eight years and concluding last night with the violent riot at the University of California – Berkeley campus, it has become official:

Liberal tolerance is a lie.

The debate is over. It’s not about “acceptance” or “tolerance” or “letting your freak flag fly.” The disgusting, horrifying events that took place at Berkeley last night chiseled it in granite. “You either think and act like us, or you’re getting pepper sprayed.”

It’s the reason why Dr. Ben Carson is looked down upon by the left. Isn’t he a minority? Yes, he is. But he doesn’t subscribe to the myth that his failures are attributed to the privileges afforded to Caucasians. It’s why Senator Mia Love, the first black female Republican in Congress, as well as the first African American to be elected to Congress from Utah, didn’t get so much as a phone call when she was elected from Barack Obama, the first black president. She didn’t subscribe to the program. They’re both outcasts. And why? Because they disagree.

And despite their hippie, peace-loving rhetoric, every time progressives fail to get their way, they lash out in a violent, savage manner. But it’s okay, they have the media on their side (thank you, Wikileaks) to qualify the demonstration as a “peaceful protest”  and violent action is dismissed as “a small minority of protestors,” as Jesse Arreguin, the Mayor of Berkeley described last night as he witnessed the college campus aflame.

Nothing that says “peaceful” like smashing the front glass window of a Starbucks or setting fire to a limousine – both things we saw the day after Donald Trump’s inauguration in Washington DC.

In August of 2014, we saw the city of Ferguson, Missouri literally laid to waste in the wake of the police shooting of Michael Brown, a criminal who attacked police officer Darren Brown and was shot in justifiable self-defense as Brown attempted to grab Wilson’s gun. But there’s the media pushing the narrative that Brown had his hands up and was surrendering when he was shot and the city exploded in a fit of rage, led by Brown’s own stepfather who encouraged the masses to “Burn this b•••• down!”

And what happened? We found out that “Hands Up, Don’t Shoot” never happened. Forensics proved it. The Justice Department confirmed it. As for the people who lost their businesses and property? Oh well.

The progressive party of tolerance and peace lays claim to the birth of Black Lives Matter who are nothing short of a terrorist group, walking in the street chanting “Pigs [cops] in a blanket, fry ’em like bacon,” and “What do we want? Dead Cops. When do we want them? Now.”

But progressives will rush to the side of these disturbed domestic terrorists. Two days after the “What do we want?” protest occurred, two NYPD officers Wenjian Liu and Rafael Ramos were gunned down by African-American Ismaaiyl Brinsley while they sat in their police car. Juan Williams of Fox News ran to the killer’s defense and to protect the work of Black Lives Matter.

Yeah, that makes it okay. And how come progressives get the benefit of the lone “psycho” but an ISIS-inspired terrorist shoots up a night club, and all gun owners are guilty?

“You can characterize those chants as harsh; even as painting an overly broad, negative picture of police. But they reflect the frustration of young activists and citizens less molded by the church-led activism of the 1960s and more driven by current passion. They speak to a raw anger at a system those activists want changed. But they can’t be called an endorsement for killing cops,” Reid said on her MSNBC blog.

Of course, Joy. They’re just “frustrated.” You know, some people go to the gym when they’re frustrated.

We have the example of Baltimore in which rioters who were angry about the death of Freddy Gray while in police custody sieged the city with the tacit approval of their own mayor Stephanie Rawlings-Blake who told local news that the police were told to give the rioters “gave those who wished to destroy space to do that.” This is the mayor, encouraging the destruction of her town.

We have Baltimore, Ferguson, Inauguration Day, UC Berkeley… all acts of mass violence perpetrated by progressives. You will never hear anyone of any authority on the left condemn these actions. Even Barack Obama went so far as to encourage the protests after the election, one which erupted into another riot in Portland, Oregon.

And do you know what it says on the Democrats web page that one of their policy positions is?

“Ensure the health and safety of all Americans.”

I keep waiting for the day when I will become numb to the hypocrisy of the Left. For example, I will hear or read something that is completely hypocritical only to get shut down with a “well, that was different” retort. I always thought that someday I would just roll my eyes at that. It hasn’t happened. I’m still stunned by the blatant hypocrisy and I wonder how anyone with two eyes can’t see it.

And these aren’t just foot soldiers participating in enacting the hate and violence. Millionaires and celebrities get in on it, too!

And progressives have the audacity to say they’re the party of tolerance? Does this sound tolerant at all?

So I am rejecting the notion of this blatantly false and misleading characterization. It’s about as realistic as me saying I’m 6’5″ (I’m not, not even close). Any time anyone says that it’s conservatives that are intolerant, it doesn’t even merit debate anymore since the examples, the body count, and the property damage value has escalated so high, we don’t even have so say “Look up” to prove the sky is blue.  These are violent animals who will literally hurt you if you disagree with them and because they disagree, your thoughts are “hate speech” which is the instant justification of all their actions.

Ironically, it’s said that free speech was born at Berkeley in 1969. Well, it died there in 2017. The notion of liberal tolerance is now just a myth.