Liberals are the Growing Terrorist Threat 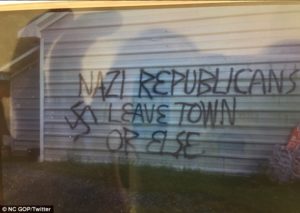 The Police Executive Research Forum (PERF) is a group of left-leaning supposed “police executives.” Despite the name, they are not a police organization which represents police. Rather, they are in the habit of blaming police for any action the cops take – instead recommending policies of police inaction.

Because they and their policy recommendations are invariable leftist, liberal news outlets like the New York Times (NYT) have a habit of quoting them and their suggestions for better policing.

In June of 2015, the Times posted an article entitled, “The Growing Right-Wing Terror Threat,” where the NYT quoted a survey they conducted with PERF. PERF concluded that the number one terrorist threat is not eco-terrorism or Black Lives Matter (BLM) radicals, or even Islamists. No – according to PERF, “74 percent reported anti-government extremism as one of the top three terrorist threats in their jurisdiction; 39 percent listed extremism connected with Al Qaeda or like-minded terrorist organizations. And only 3 percent identified the threat from Muslim extremists as severe, compared with 7 percent for anti-government and other forms of extremism.” Anti-government extremism is of course liberal code for anyone who thinks government is too large, too intrusive and generally out of control.

On its face, this is most absurd. As a rule, we on the right, or extreme right to anyone the left, are a peaceful bunch. The most we ever do is go to rallies – maybe complain about things.

In fact it is the left who consistently resorts to violence at the drop of a hat.

We can all agree that groups like BLM are certainly not of the right. Yet many neighborhoods have been trashed and burned as their “peaceful” rallies inevitably turn violent against police, whites and businesses.

This is the standard M.O. for the radical left – to see something they don’t like, or something they fear, and instead of living with and controlling their anger, they lash out.

The job of the statists who control and run these leftists is to keep them lathered up – to keep them angry and resentful – feeding their followers a steady diet of hate and fear for the right, invariably resulting in violence.

This hatred once again boiled over in North Carolina. The target this time was the Republican Party headquarters in Hillsborough. Late Saturday night the headquarters was firebombed and an adjacent building vandalized with graffiti.

According to police, at least one Molotov cocktail was thrown threw the glass at the front of the headquarters building. For those unfamiliar, a Molotov cocktail is made up of a glass bottle filled with highly flammable liquid, with a rag stuffed in top to be used as a fuse. Light the rag – throw the bottle – it hits an object, or the ground – the bottle shatters, releasing a shower of liquid which ignites. Very effective – very deadly.

A North Carolina GOP official called it an act of political terrorism. “Executive director of the state’s Republican Party Dallas Woodhouse said the building was ‘a total loss’ and photos from the interior showed damaged yard signs bearing the names of Donald Trump and Mike Pence, along with other politicians.”

On an adjacent building, was scrolled in large black print the words, “NAZI REPUBLICANS LEAVE TOWN OR ELSE.” Accompanying the words was a Swastika. Nice touch.

Woodhouse added that, “Whether the bomb was meant to kill, destroy property or intimidate voters, everyone in this country should be free to express their political viewpoints without fear for their own safety.” Evidently Mr. Woodhouse is not familiar with the philosophy and tactics of the radical left. Anyone who is not of like-mind and not in lockstep with the left should be silenced – one way or another.

But fear not, for Obama’s ATF is on the case, investigating the incident. They’ll get to the bottom of it – just like the FBI has done in the Hillary email case.