Liberal stupidity is a Pre-existing Condition 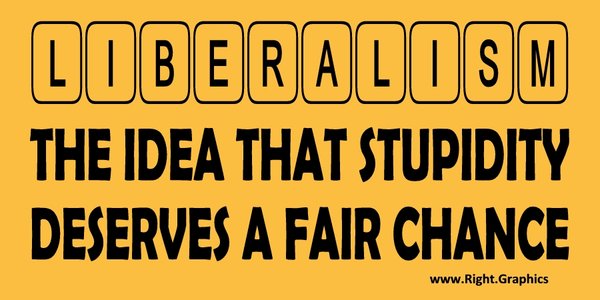 Liberalism is born of ignorance and bred on immorality.

Conservatives don’t have to make up liberal insanity.  It’s on display for all the world to see.  Everyone is born a liberal.  Everyone is born ignorant of how the world works.  Liberalism is a lifelong debilitating disease and the only cure for it is conservatism.  If young, ignorant liberals are not educated in morality and the truth then they will suffer their entire lives wallowing in a cesspool of ignorance being fooled by those who would make of them useful idiots.

If you listen to leftists rant and rave about repealing the debacle that is the ObamaCare health insurance bill that was designed to destroy the health insurance industry and put government in the driver’s seat, you would think you were hearing stories of Hitler.  Democrats, who have wiped out fifty million babies in the womb, say Republicans want to kill your children.  They are saying that employers want their employees to die without healthcare.  Ask Moses how many bricks dead workers make?

Everything the leftwing liberal Democratic socialists do is designed to dupe the ignorant into giving up their wealth and their liberty and give all power to the Democrats to control their lives.  This is the definition of the Left.  The Left is for tyranny and the Right is for liberty.  There are no far right Nazis and far left Communists with centrists full of wisdom.  There is only right and wrong!

When a leftist tells you that Republicans want to drink dirty water and breath dirty air, when he says Republicans want to steal their employees’ health insurance so they die, when they say they want grandma kicked out into the streets and to let children starve to death, when they say Republicans want to make rape a “pre-existing condition,” and when they tell you conservatives don’t care if they kill the planet, ask them, “WTF is wrong with your brain?”  Anyone who believes such things is freaking insane!  And that, in the end, is the defining characteristic of liberalism.  Insanity is doing the same stupid thing over and over and expecting a different result.   And believing that those who tell you to grow up and be responsible for yourself rather than be a parasitic burden on society are the ones trying to destroy you is as stupid as it gets.

The greatest genius of our time believes Chicken Little was right