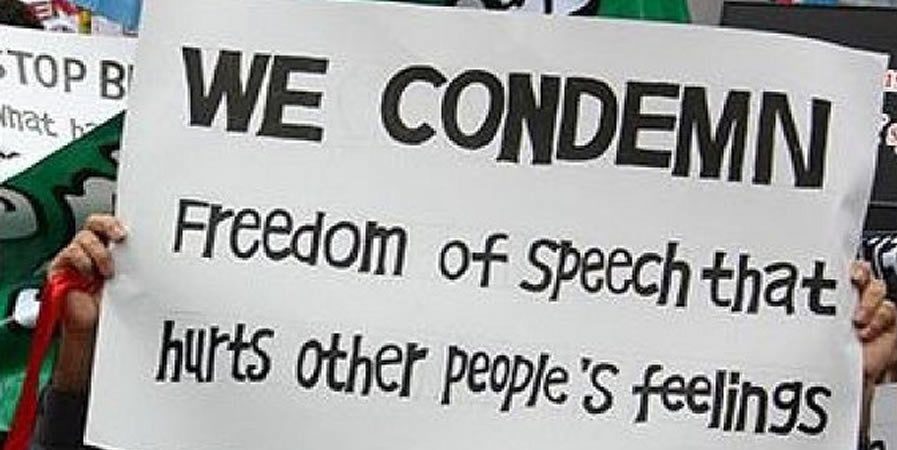 “Micro-aggression,” “Politically Correct,” charges of racism, flat-earthers, Islamophobes; all of these are leftist’s efforts to censor righteous, intelligent thought.

A “micro-aggression” is anything you say with which a leftist disagrees.  These people have not been educated, but indoctrinated into believing whatever lies advance the cause of socialism to establish their tyranny.  If you disagree by exercising critical thought to disprove their beliefs then you are satanic in their minds because leftist ideology is their religion.  These are the people who infiltrated Catholicism to establish the Inquisition.

Here are examples of looney leftists verbally assaulting people.  Let’s see if you can count how many “micro-aggressions” this woman inflicts on a fellow passenger of this plane because he supports Trump.

Every sentence she speaks is an attack.  There are thirteen written and she is then recorded making six egregious verbal “micro-aggressions” to the passenger.  She then defies the authority who tells her to vacate the plane and goes into defensive mode when she realizes she’s being kicked off.  This is pinnacle of looney liberal stupidity believing she has the right to accost this man without consequence.

“That man doesn’t ‘believe’ in climate change.  Do you believe in gravity?”

That is the kind of moral equivalence that ignorant liberals make.  They said the same thing about Reagan in 1980 and he won the Cold War without firing a shot!  Leftists’ equating the Democrat’s global warming political scam with actual science is farcical.  If you don’t believe in their religion of man-made climate change then you don’t believe in science and should be burned at the stake.  It is liberals who are ignorant of science when they fall for the fraud being perpetrated by the likes of Al Gore.

“Who is the more foolish?  The fool or the fool that follows him?”

After Trump’s inauguration, Hollywood elites followed in the footsteps of Meryl Streep who used her lifetime achievement award speech to spit on the little people who so stoopidly voted for Trump!  Other elitist fools spent their day at a women’s rally disparaging Trump as a woman-hating misogynist, rapist, and all around cretin.  This is another case of liberals escalating their micro-aggressions to outright assaults and lies on all men.

LDS – Liberal Derangement Syndrome is a real illness.  It is caused by an airborne pathogen known as verbal stupidity and there is only one cure – education in morality by intelligent people like myself.  Hopefully, you will have learned something from these examples of how not to think and behave.  You’re welcome.

Though there may not be much hope for those like Bill Maher and those who believe a comedian is an intelligent source of moral truth:

Maher’s intelligence is marred by his lack of a moral compass, but he makes funny jokes.  To a liberal, mocking what is right is a valid debunking of righteousness and truth.  To Maher’s claim; is it that people who became drug addicts got stupid and voted Republican, or that people who saw Democrats becoming drug dependent fools relying on government to run their lives wised up?  Like all liberal comedians he lacks the understanding that “we mock what we do not understand.”