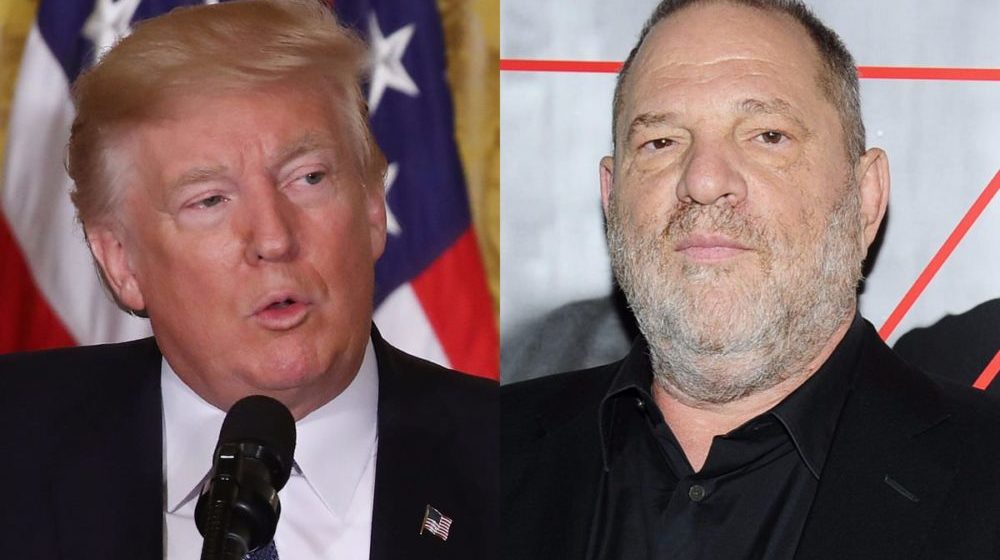 Both of these men are billionaires who have worked in the entertainment industry around the most beautiful women in the world.  They have both been glorified by Hollywood elites, highly respected as beloved benefactors for the last thirty years, donated generously to Democrat politicians, and their characters known by all.  One of them is a sexist pig who used his power to coerce and manipulate women into performing sexual favors for him to get jobs.  He has groped them, molested them, threatened dozens of them unless they submitted to his advances, and even resorted to forcible rape that was covered up by everyone in Hollywood for decades.  The other has always behaved as a gentleman in the presence of women and is loved and adored by those who know him.  But now he is being falsely accused and maligned as being worse than the other because he campaigned for and was elected President of the United States as a Republican.  Because he represents patriotic Americans, promoting good Christian values, is actively working to actually fulfill his campaign promises to make America great again by advancing the TEA Party agenda, and is pushing back the destructive, anti-American leftist ideology of Democrats while exposing their lies, he is slandered and smeared as being worse than a rapist.

If all men want sex, and some men commit rape, and rape is an act of male aggression, then all men are rapists that should be emasculated.

The dysfunctional Left, in their cognitive dissonance of damning all men as rapists, are incensed that Weinstein, a rabid Hollywood liberal and serial molester, is being brought down after being exposed as a rapist, while Donald Trump, whom they exposed as being guilty of man talking smack about women, was not.  Ever since the leftist mainstream media failed to torpedo Trump with their Access Hollywood tape, leftists have been twisted in fits of rage over his victory against Hillary who is the wife of another serial molester who used his power to coerce, grope, and even rape women while she crushed them if they complained.  When women came out and confessed that Trump has always behaved as a gentleman, the Democrat smear campaign, that included some bow-wows hired as leftist operatives to make false accusations, all fell on its face in the mud from which it was drawn, and Hillary’s lie that Trump admitted to being a sexual predator rings as hollow today as her claims that her husband’s crimes have been litigated when everyone knows she humiliated those women.  Now that they’ve finally confessed to Weinstein’s crimes against women they believe they can somehow paint Trump with the same brush.  But Weinstein has far more in common with Bill Clinton.

Trump is not Weinstein, but Clinton is

No one with good sense believes that Donald Trump is the woman molesting pig Harvey Weinstein has been exposed as, but that doesn’t stop dysfunctional leftists from trying to smear The Donald once again.  Tina Brown said this week that the real problem in the Weinstein story is that somebody just like him is still in the White House, except that Bill Clinton hasn’t been there in sixteen years.  Weinstein and Clinton have the same history – using their power to molest women and coerce them into sex.  In contrast, Donald Trump has never had to pursue women.  Gorgeous women have always thrown themselves at him!  The Donald, despite his locker room talk with his buddies that was recorded, has always behaved with grace, dignity, and charm such that the many beautiful women who have known him have fallen in love with him.  President Trump has always treated women with great respect, unlike the leftist media who have slandered his wife and daughter in the most disgusting ways suggesting subservience and incest.  The hideous Weinstein was recorded in an attempted sting by the FBI molesting a young woman in his employ who was so completely grossed out by the hideous pig begging her to grace him with her presence sexual favors that she went to the authorities.  But nothing was done to him for over a decade.  Even the leftist liberal reporters who had the story sat on it for thirteen years.

Then there are all the two-faced leftist displays of “shock” at the public revelations about Weinstein that all have them have known for years.  Hillary Clinton has been called on to divest herself of the millions of dollars in campaign donations she accepted from this serial molester who is akin to her own husband.  But then Hillary, who claims to be a champion of women, is the one crushed every woman who was molested by her husband.  She continues to slander college men as being an elitist brotherhood of rapists and says she can’t give back the money she took from Weinstein, but said she may just “donate it” to the – wait for it – the Clinton Foundation, her money laundering front for her campaign and Washington influence peddling war chest.  LOL!  Then there’s the condemnation by Obama that is a farce of parsing words in which he condemns the reports revealing Weinstein’s crimes rather than condemning the molester.  It is a study in deceptive speech how to appear to do what is right in the eyes and ears of those who do not pay attention, but actually take the opposite side blaming the victims and the reporters rather than the perpetrator.

Barack Obama: “Michelle and I have been disgusted by the recent reports about Harvey Weinstein.”

Obama knows exactly what he was trying to say.  When he’s not speaking in public without a teleprompter and has time to craft his words he is able to shape his narrative to say exactly what he means in the way he means to say it.  This is how leftists appear to uphold morality, but in reality are spitting in the faces of the righteous.  It’s like a person who apologizes by saying, “I’m sorry your feelings were hurt.”  That’s not apologizing.  Saying, “I’m sorry I hurt your feelings,” is an apology.  The first is just spitting in someone’s face saying, “I meant what I said and it’s just too bad for you that you are hurt by it.”

Leftists love to twist words, warp meanings, and stick it to someone who doesn’t quite follow what they are saying.  This is how the Left manipulates the unwitty and defrauds the ignorant.  It’s how they create fake news and fool naïve liberals who believe what they think they are saying.  It’s the technique by which they deceive the unwary and convince them to not listen to the other side of the story lest they hear the truth and apply critical thought to reason it out.  That is why liberals live in the delusional world of cognitive dissonance believing they are upholding righteousness by advocating wickedness.

The one fact that screams wickedness against the righteous is the Left is trying to conflate locker room guy talk by Trump with actual rape by Weinstein and the Clintons.  That sinister moral equivocation is not just an insult, but it is all leftists, Hillary, Obama, and every Democrat, pissing on the victims of sexual assault.  Like Democrats claim to be “for the little guy,” “for minorities,” and “for women’s rights,” this is the in your face proof that they are two-faced liars of the worst kind.  Every group that has hitched their wagon to Democrat leaders has sunk into moral, cultural, and financial decay.  Democrats and all leftists are the cancer of society.

There is a psychological term for people who believe their own lies.  They are suffering from a pathological condition known as Bordeline Personality Disorder or Mythomania.  It describes all liberals over thirty from Obama and his need to unmake America and remake it as a socialist toilet, down to Rose McGowan who declares that Trump, whom she has never met, is a worse sex offender than Weinstein who actually molested her.  Liberalism when young is a result of ignorance compounded by a lack of moral understanding, but in those who are older it has been proven to be a mental illness.  It is most often evidenced by leftists who say the Founders were liberals without comprehending the difference between 18th century American liberals who today would be called Christian conservatives, and 21st liberals who used to be known as Nazi and Communist socialists.