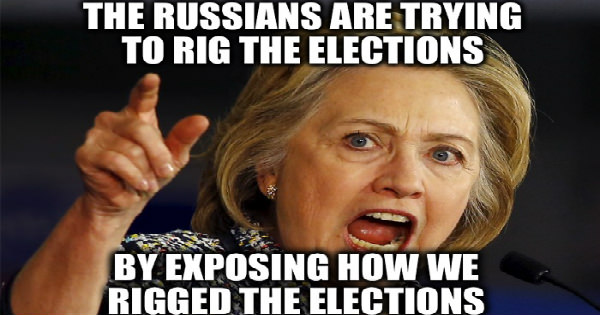 The memo obviously went out among the sources of elite opinion that they should accuse the Russians of “hacking” the election. The coordination of the message, and the message rather than the news is exactly what it is, cannot be chalked up to coincidence. This word was deliberately chosen to mislead. The use of the word “hacking” suggests that the Russians hacked into voting machines and added votes to Trump or something of that nature, but that is not what is being alleged even by the most unhinged. What is being alleged, even if entirely true, is that Russia attempted to “influence” the election.

One of the alleged means by which Russia attempted to influence the election was by hacking the DNC emails and turning them over to Wikileaks to release. This is superficially plausible, but the much more likely explanation that is shaping up is that the DNC emails were actually leaked by a DNC insider with access rather than hacked by a foreign government. Julian Assange has confirmed this himself. But even if true, this would mean that Russia hacked the DNC’s emails, not that they “hacked” the election.

No one ever seriously questioned the authenticity of the emails. No one seems to be suggesting that Russia altered or created emails to make them more damning. Russia didn’t make the DNC conspire to screw Bernie Sanders. It didn’t make the DNC collude with the press to make Hillary look good. The DNC did that all on its own. Having damaging truths exposed may cause an election to not go the way the Elites prefer, but that is not “hacking” the election in the generally understood sense of that word.

So, I’m supposed to believe that the Elites are truly shocked and outraged that a foreign country would attempt to influence another country’s election if they feel they have a stake in the outcome? Yeah, maybe if all the Elites just graduated from kindergarten. Hello, welcome to the real world. This is a common place. The allegation is not outlandish, it’s mundane. Perhaps the supposedly anti-war left should ask itself why Russia might have felt it had a stake in getting the candidate who wasn’t threatening to go to war with them elected and why that candidate didn’t have a D behind her name. Go figure.

The US has a long and well documented history of attempting to influence the outcome of foreign elections, both overtly and covertly, often carried out with the aid of the CIA which we are now supposed to believe is outraged that Russia might have attempted to do the same thing. President Obama went to the UK prior to the Brexit vote and clearly tried to influence the outcome by threatening our relationship with them if Brexit succeeded. Obama’s visit may well have backfired, but the intent was obvious.

Audio of Hillary Clinton complaining that we hadn’t adequately ensured the outcome of a Palestinian Authority election surfaced during the campaign. I suspect there is a high degree of overlap between the people who defended Hillary statements as par for the course and those who are now up in arms about alleged Russian “hacking.” The US clearly attempted to influence the 2010 election in Ukraine, and it is very credibly suggested we helped foment the subsequent coup when the election didn’t go our way. Again, the overlap between those who think the US was on the side of right in Ukraine and those who are now apoplectic about Russian influence is likely very substantial.

Shortly after the Russia “hacking” allegation arose, a Time Magazine cover from July 15, 1996 started making the rounds. The cover was a cartoon of Boris Yeltsin with a title that read, “Yanks to the Rescue: The Secret Story of How American Advisors Helped Yeltsin Win.” Oops! That’s kind of inconvenient for the narrative.

One allegation is that Russia hired internet trolls to post pro-Trump and anti-Hillary items on social media and websites. This is entirely plausible. I don’t know that it happened, but I don’t necessarily doubt it. But you know what we do know for sure? That billionaire George Soros funded pro-Hillary internet trolls and anti-Trump protests that included violence against Trump supporters. Where was the outrage from the anti-Trumpers over this blatant attempt to influence the election?

The Saudis and many other foreign entities gave millions to the Clinton foundation in what was an out in the open influence buying scheme. Was there like outrage from the lefty new Red Baiters about this? Once again, care to speculate about the overlap between apologist for the Clinton Foundation and the current outrage chorus? Heck, at least the Russians had the decency to attempt to influence the election covertly.

A consequentialist case can be made that it’s OK when we do it because we are the good guys and not OK when they do it because they are the bad guys or OK when it is done to someone else but not OK when it is done to us. If that is really the case the neo-McCarthyites want to make then they should make that case, but please spare me the feigned outrage. The “Oy vey, I’m shocked and outraged that Russia “hacked” our election,” routine is simply not credible.