Let’s Discuss: Crude Language and the Feminist Freak Out

There is a movement underfoot that began on November 26, 2016, called “The Pussyhat Project”. While this movement seems benign enough, it is a “protest” against our incoming President, Donald Trump, and the idea that he supposedly “grabs” women by their genitalia. And so, in outrage over Donald’s supposed habit of crotch grabs, the Pussyhat Project was born. Feminists all around the country are now feverishly knitting pink hats with little pointy “ears” on them, to march on the DC Mall on Inauguration Day, as well as other cities, to show they stand for women’s rights. And pussyhats.

The Project’s website states that the purpose of the hats is a “play on ‘pussycat” and also the hats are representative of female genitalia, and lastly, to “provide a unique collective visual statement which will help activists be better heard.” Better heard at what? We have been hearing the unending grousing and bleating from the Feminist quarter nonstop now since Hillary Clinton ran for office and then smashed and burned, for numerous reasons, but one of them was for, well, aggressive Feminism that is not representative of the larger majority of women. 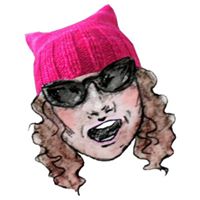 To dissect the whole idea of women marching through DC, wearing pink hats that they knit, to show they dislike Donald Trump, is supposed to accomplish what? Show everyone they can knit, and dislike Donald Trump? And, this can be certain, have a number of them go topless and unfurl their saggy middle-age pups to the world all in the name of “feminism”?

There are certainly a number of issues that women can be supportive of, yet Feminists choose to ignore these. The massacre and brutalization women in Muslim countries. Domestic violence survivors. Widows and single mothers who are struggling to make ends meet in a depressed Obama economy. Young conservative women who want to engage in their community and support traditional values of motherhood and domesticity. Instead, they choose to make an inane statement of generic “outrage” via pink hats with horns on them. Or genital warts. Or whatever silly sorority girl ideas they have cooked up to try to attract other unhappy women into their cause by their attempt at “cutesy” to mask their ugly core cause of general unhappiness.

Their “cause.” Modern Feminists have no discernible purpose. They now are bent on supporting quasi women as their new backbone in an attempt to be relevant. The “Pussyhat Project” states that “In this day and age, if we have pussies we are assigned the gender of ‘woman’. Women, whether transgender or cisgender, are mistreated in society.” Notice that “transgendered” women are listed first, before “cisgender” or REAL women. Feminists seem more concerned for confused men who THINK they are women, than for actual women. They had no problem when Bruce Jenner, a.k.a. “Caitlyn”, won Woman of the Year, thereby virtually confirming the idea that men are better at everything, including being a woman. Go figure!

Present day Feminists have strayed so far from the original “Feminists,” they are not even within the same realm. Susan B. Anthony and company stood for women’s rights to be women, and not be persecuted for it. She championed the causes of women being able to own property, so that if a husband passed away, a woman wasn’t left homeless and destitute with her children. Susan B. Anthony held strong traditional values, based on her Quaker upbringing, and believed in the sanctity of life, home, and hearth. She believed both women and men were made in the image of God, and that they were different, but equally important. She believed women “were empowered through their strength to give life even in the most difficult and unexpected circumstances”. She did not support a war between the sexes, but rather, to see the beauty in how they complemented each other.

Modern day Feminists are man haters. They take to social media and make videos about how they aborted their male children, and how men should be “taken down.” Modern day Feminists hate family and children, nurturing offspring, and all the many beautiful attributes of femininity, and try to shame other women who do love their biological femininity. Modern Feminists are shrewish and shrill, and try to jam their agenda down the throats of others with anger, bullying, and exhibitionism — all tactics that repel people rather than attract them to their “cause.”

Modern Feminists also seem to hate children, and themselves. They hate their offspring, and use their unborn babies as weapons against “The Patriarchy”, by abortion on demand. The support organizations that engage in wholesale infanticide, and then sell the body parts of infants on the open market — a practice so gruesome, it rivals Nazi Germany, yet they are offended by Donald Trump. The cognitive dissonance and disconnect is mind boggling.

These women have no thought or issue about what is truly ethical, only about being involved with something that is at its core, negative. They enjoy the negative reinforcement, and the negative attention. This is why they constantly strip naked, while screaming they are being “objectified.” This is why they dye their underarm hair and do every obnoxious thing they can possibly think of, whether it degrades them to the core or embarrasses all around them, to get attention. In reality, it’s not impactful, reinforcing, or even relevant. It is pitiful. It is the bitter cry of an angry, scorned woman, and that is what is at the root of their hatred for men. And for Donald Trump.

Donald Trump represents every man that has ever scorned them. Every man that didn’t fall at their feet because of their “beauty”. Every man that left them high and dry. When Donald talked about “grabbing them by the pussy” in that secret locker-room guy session, something clicked in their minds. They knew no one was talking about them, and that made them resentful. Feminists dream of this kind of stuff, getting grabbed up by a dominant male who is now under their spell, or they wouldn’t flock in droves to see degrading movies like “50 Shades of Gray”. And, knowing dominant males, the ones they really want, find them repulsive, has turned them into a crowd of seething harpies.

So, rather than being loud, obnoxious, naked, and every other annoying action they repeat as they run through their repertoire of absurdity, they should stop and think, “what are we really accomplishing here?”. And, instead of feverishly knitting pink hats with horns on them for your selfish and illogical cause, how about knitting hats for the homeless, who are freezing tonight. How about feverishly knitting a bunch of pretty hats, without horns, for the local cancer ward, with all they women in there, both young and old, that are suffering and fighting for their lives? Or for the local newborn ward, where the new life and potential great women of the future are now incubating and getting ready to enter the world? How about being the positive change you are always screaming and taking off your tops about? Then, maybe people would embrace your cause.