Legacy of A True Hero 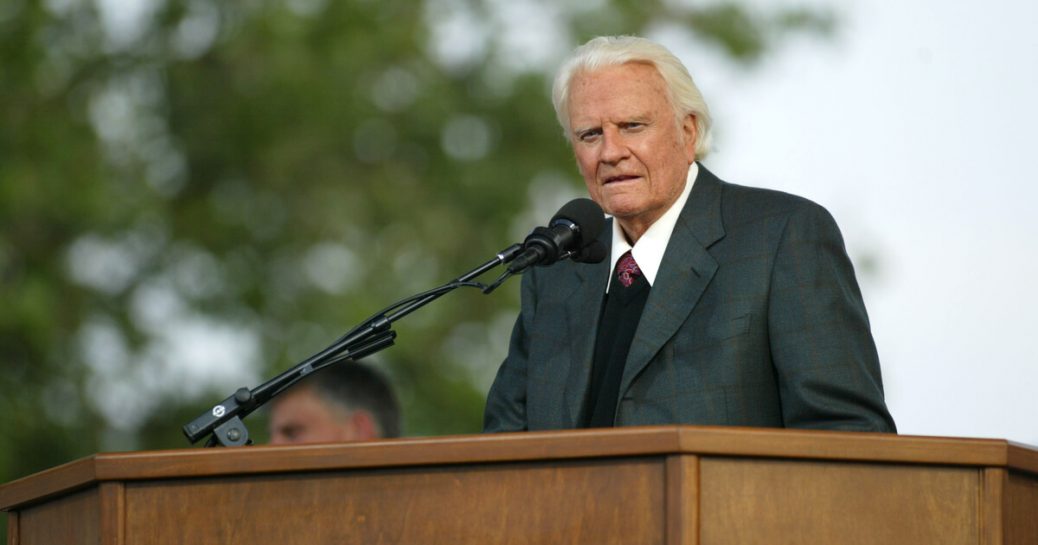 Billy Graham has been advisor to every president since Dwight D. Eisenhower. The only exception would be Barack Obama.  Obama did spend some time with him in 2010 but actively counseling him, no.  Obama’s primary ‘spiritual’ advisor was Jim Wallis who is more of a secularist than a true minister of the Gospel. Jim Wallis is the kind of religious leader that secularists quite like. A spiritual adviser to Barack Obama and regular on the podium at the World Economic Forum (WEF), the US Christian writer and activist quotes Adam Smith and Josef Schumpeter as readily as he does Jesus Christ and the Apostle Paul.

Associated with the political left of the US evangelical movement, Detroit-born Wallis has campaigned on issues as diverse as the death penalty and global poverty to climate change and immigration. Now he’s turning his attentions to the business community. He’d like to see a “moral economy” ushered in – a desire that he believes many corporate leaders, religious and non-religious, share with him.

Wallis has become a regular attendee at the annual Davos business summit in Switzerland, where he notes an escalating interest in values and ethics. For years, he’d be assigned a slot at 7am on the fourth floor, he says. “Now we’re on the plenary session at 10:30am.” As well as issuing an ethical call-to-arms, 65-year old Wallis also co-chairs WEF’s Global Agenda Council on Values, which seeks to promote a more principled approach to capitalism. 1 Jesus never taught a ‘more principled approach to capitalism’.  Jesus believed in full blown capitalism, not some idiotic ‘social economics’.

Though Graham concentrated on a person’s relationship with Jesus, the most important aspect of Christianity, he believed in reaching out to those in need to give them a helping hand.  Too many preachers try to make you believe that money is the root of all evil.  Money is neither good or bad.  What a person does with it can be good or bad but the money itself isn’t bad.  Scripture tells us that the love of money is the root of all evil.  We have to remember that Solomon was the richest man in the world and I believe that no one today is as wealthy as Solomon was.  The point to this is to do what Billy Graham was called to do required a lot of money.  The Amplified version of 2 Corinthians 9:8 states: God is able to make all grace and favor and earthly blessing come to us in abundance so that we may always, and under all circumstances and whatever the need be self sufficient possessing enough to require no aid or support and furnished in abundance for every good work and charitable donation.  This isn’t living on get by street.  The Billy Graham Evangelical Association required millions annually to operate.  I can never recall any type of scandal concerning the millions that went through the BGEA.

There have been multitudes of ministries that have come and gone because of the leaders using the monies donated to their ministry for their own personal use.  Just look at the Clinton Global Initiative.  Out of the millions that are donated only about 5% makes it to charity while hundreds of millions go to ‘administration’, i.e., Clinton’s pockets. In 2013, the Clintons made 11 U.S. grants of about $6 million, including $2 million to one of its spinoffs, the Clinton Health Access Initiative. It took in nearly $300 million that year, its financial statements say.

The Clinton Global Initiative, meanwhile, does list some “commitments” it has with veterans groups, most of them starting after 2011.

In one example, the initiative takes credit for gaining a commitment from the Iraq and Afghanistan Veterans of America in 2011 to join the Chamber of Commerce in holding Smart Job Fairs. 3 c

In 2013 the Obama administration, under the direction of Lois Lerner, both Samaritans Purse and Billy Graham Evangelical Association was attacked by the IRS.  This took revenue from helping people to fight this uncalled for attack.  It is my opinion that this was done specifically because of the Christian basis of both foundations.  It goes without saying that Obama’s main concern was the advancement of islam and the discrediting of anything Christian. Evangelist Franklin Graham has stated in a letter to President Barack Obama that the Christian charities he is leading were also targeted by the IRS along with conservative groups last year.

Graham sent a letter to President Obama on Tuesday outlining how Samaritan’s Purse and the Billy Graham Evangelistic Association were the subjects of an IRS probe during the 2012 campaign season.

“In light of what the IRS admitted to on Friday, May 10, 2013, and subsequent revelations from other sources, I do not believe that the IRS audit of our two organizations last year was a coincidence – or justifiable,” wrote Graham. 3

After decades of preaching the gospel, helping people, and counseling 10 presidents his organization is treated like a Clinton organization.  Even though this happened he still would pray for Obama every day.  His example of the love of God is not often seen.  His legacy is unmatched.  His character is a thing to be reached for by all of us.  We may not always agree with his stand, but I believe his insight into the Word of God exceeds most preachers today.  He is with his Lord today and his beloved Ruth. He harmed no one while he was on this earth and did all he could to help others to get where he is today.

The world has lost a great influence for God, but his family will continue his work.  Some have even proclaimed that his passing has triggered a new era for the church.  Time will tell.  But we will all be better off because of Billy Graham.

Congratulations on your graduation.