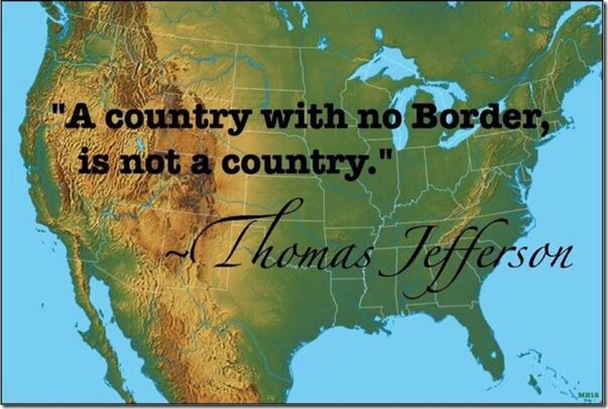 I find it fascinating that the only culture not worth preserving is Western culture, and particularly American culture.

No matter how long I lived in – pick a country – say – Mexico, I would never be afforded the title of hyphenated countryman. Regardless of my insistence, I would never be considered American-Mexican, or American Hispanic. No one would come to my aid and insist that my American heritage must be preserved – that it would add to or somehow strengthen Mexican culture. There would be no protests, no marches, no picket signs, no pressing two for English. And those in Mexico would have little patience with me flying the American flag. They would expect me to assimilate, and rightly so.

Yet, as we are well aware, there is no such expectation in America. Quite the opposite. We are the ones who are expected to accept and celebrate everyone else’s culture but our own, allowing them to live as they would like, as permanent house guests. This, we are told, is multiculturalism and is indeed to be celebrated as somehow strengthening our nation.

Because of this we are slowly losing our identity, our culture – what it means to be American.

Recently, Rep. Steve King, R-Iowa, landed himself in hot water with the liberal elite for stating this very thing. He was interviewed  by the poster-boy of leftist elitism, CNN’s Chris Cuomo. Cuomo immediately began attacking King regarding a tweet by the Republican in support of a comment made by Dutch politician Geert Wilders.

Cuomo began by saying that, “You wrote Wilders understands that culture and demographics are our destiny. We cannot restore our civilization with somebody else’s babies. This is being condemned by many regions of American politics and citizenry. What did you mean?”

Of course Cuomo, being the unhinged leftist that he is, didn’t give a crap what King meant. To Cuomo, as with all leftists, this was about race – as everything is. He had already convinced himself that King’s statement was all about race – that King wasn’t really talking about being American. What he really meant was about maintaining our country’s “whiteness.”

“Chris, we’re a country here, that if you take a picture of what America looks like, you can do it in a football stadium or a basketball court and you see all different kinds of Americans there. We’re pretty proud of that, the different looking Americans that are still Americans,” King said.

To me, it’s pretty obvious what Rep. King is saying – that being American has nothing to do with color, but I’m not a leftist with special abilities.

I’ve often said that liberals are the only humans who believe they have the ability to peer into one’s soul. Regardless of what anyone even leaning right says, leftists can see inside and tell the world what you “really” meant. Chris knows that King doesn’t really mean all that nonsense about being “different looking.” He’s talking in code, about preserving only the white race – because

King elaborated that since 1973 Americans “have aborted nearly 60 million babies. There’s been this effort that we’re going to have to replace that void with somebody else’s babies. That’s the push to bring in much illegal immigration into America, living in enclaves, refusing to assimilate into the American culture and civilization. Some embrace it, yes. Many are two and three generations living in enclaves that are pushing back in resistance against assimilation.”

This is when Cuomo switched on his special “soul vision,” as he stated that “it seemed like you were trying to say someone else’s babies means you’re either white or you’re not right.”

Wow – nifty slogan! You sure did show King for the racist he is, despite the fact that he said nothing of the sort and that almost 56% of all aborted babies  in the United States are black or Hispanic.

The back and forth continued for a time and the entire so-called interview was a monumental waste of time, and a set up. They always are. King was never going to convince Cuomo of anything and Cuomo knows, due to his “soul vision” ability, that King is a racist.

Frankly, it escapes me as to why anyone from the right would bother subjecting themselves, or more to the point, lowering themselves to appear on CNN.