The Left’s Campaign to Demoralize and Defeat Trump Supporters 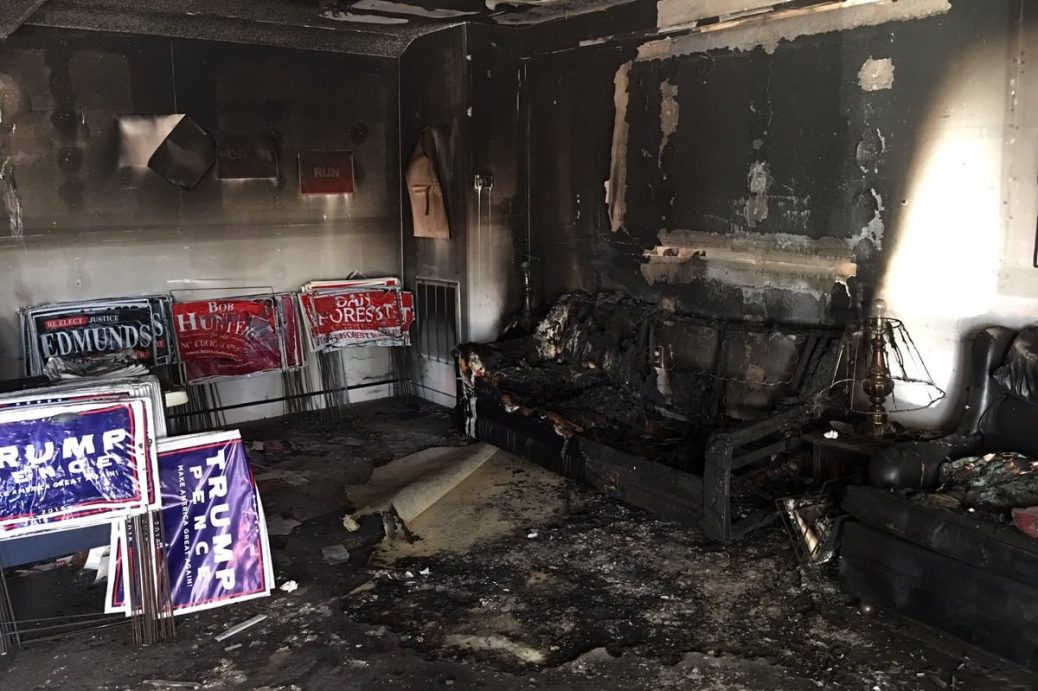 The Clinton Campaign, the White House, the Democrat National Committee, Establishment/Never Trump Republicans, and the majority of mainstream media (MSM) are in total synch – coordinating, corroborating, and synergizing their combined effort to take down Republican presidential candidate Donald J. Trump and simultaneously attempting to discourage and prevent undecided voters and Trump supporters from voting for him, or changing the decision to vote for him, respectively. They are in a full-court press to “demoralizing” the Trump supporters and the Republican base. Their primary effort is to “talk down” Trump’s accomplishments, character, his “political positives”, and his message on issues that are truthful, necessary and stopping the hemorrhaging – on the border and illegal immigration and refugees, defense, foreign policy and national security, law enforcement and safe streets, the economy, government corruption, etc..

This is what the political left does; this is standard operating procedures – a calculated process of lying, deceit, falsification, fraud, and violence. They will use their friends in the MSM, their surrogates, and anti-Democracy groups in an attempt to coalesce, convince and corroborate their plans. Further, they will marginalize anti-Trump Republicans labeling them as racists, bigots and xenophobes in order to persuade and push them in to the never-Trump camp to help spread their narrative, while at the same time attempting to and successfully demoralizing voters and creating doubt in their minds and yours that Donald Trump is not qualified, is unfit, or incapable of serving as President. They are extremely subtle in their intent, while at the same time effectively getting this narrative of demoralization, doubt, and defeat spread across the nation creating a malaise with voters.

This is a well-planned major strategy similar to that presented centuries ago by Sun Tzu, the well-known Chinese general, military strategist, and philosopher. The course of which are strategic principles of military strategy to demoralize adversaries into thinking they are out number, less armed, or less capable of defeating and opposing force. Key to this effort is the military strategy and tactics of Psychological Operations or PSYOP to use covert and clandestine forms of strategic influence over opposing forces and the populace. Over the last 50-years or so, similar strategy and tactics have been implemented and applied against candidates and political campaigns by methods improvised and taught by Saul Alinsky, the 1940 thru 70’s radical Socialist community organizer and early Hillary Clinton mentor, who used and trained his followers how to carefully craft tactics to influence and demoralize voters and political opponents. This comes in the form of labeling opposing candidate(s) as incapable, unfit, illegitimate, and or unqualified based on politically false, fraudulent, and fabricated stories. The primary method of course is to use the MSM and its powerful means of dissemination. The Clinton Campaign, the Obama White House, and the Democrat Party have conveniently and ever so tactfully and skillfully have maneuvered and PSYOP’ed, from the military term Psychological Operations.

It should be noted, with regard to Hillary Clinton, there is no doubt that she was deeply impressed by Alinsky’s work. In 1969, she wrote “‘There Is Only the Fight …’:  An Analysis of the Alinsky Model,” a 92-page senior thesis at Wellesley College praising the elder radical’s tactics. At the Clintons’ request, the thesis was embargoed until after she and Bill departed the White House.

The political left the Democrat Party, the White House, the MSM and the Clinton Campaign in recent years have implemented similar methods to sway, persuade, and even embarrass “Establishment Republicans” and essentially force them to latch on to this message and use it both unwittingly, but perhaps wittingly. They have been marginalized and coopted and have gravitated ever so willingly, checking their conservative credentials at the door in exchange for elitist positions of power and more of the same of Washington. The Marco Rubio Campaign showed ease in serving as a surrogate to Democrats by incorporating its narrative this past week and using it to directly and deliberately to attack and criticize Donald Trump for using WikiLeaks’ data released about Clinton, Democrat Party, and White House emails, as well other sources of information such James O’Keef’s Project Veritas’ video accounts highlighting evidence of potential extensive voter fraud around the country.  Likewise, both President Obama and Marco Rubio in recent days both attacked Donald Trump directly, essentially calling him a fool and it being unfortunate to ever suggest that any efforts to rig the election, or that the likelihood that voter fraud even exists.

Similarly, such method and tactics come in many forms. Even a well-known and respected local Tampa Bay Times military affairs reporter, turned political reporter quoted from an interview with a single source opinion of a former Air Force scientist, that the emails released by WikiLeaks were hacked by Russia and are part of a Russian intelligence operation to directly influence the U.S. elections to help get Trump elected. Both are way off-base, since the U.S. intelligence community’s Office of the Director of National Intelligence (ODNI) and the intelligence bureau of the Department of Homeland Security (DHS) suggested, but could not confirmed that the ability of Russian intelligence to hack or collect such information was likely. Of course, the imperative here being that all countries use whatever abilities they have to spy on one another – that’s a given, we know that.

To that end, the last person Putin and the Russians want as President of the U.S. is Trump.  They want Hillary that is clear and anyone with any once of common sense knows that will never be openly or publicly revealed.  Every aspect of Hillary’s Clinton’s history as Secretary of State is evidence that proves Putin would much rather see her as President of the United States. Her track record of being coopted, let alone willing and able is both obvious and on record.  While Secretary of State, she handed Russia everything both Presidents Dmitry Medvedev and Putin could ever want — The Reset, the removal of U.S. Defensive Missiles and Radar sites from Eastern Europe, the change of U.S. foreign policy toward Syria when Hillary insisted that Bashar al-Assad of  Syria (a brutal dictator) was a “reformer”, and the Redline in the Sand policy, are but a few.

Whether it was Russia who hacked, intercepted and or collected Hillary Clinton’s classified national security and her political election strategy emails, or it was done by other state-sponsored groups, or independent hackers, is irrelevant in their intent and disposition of those emails and other documents.  WikiLeaks in and of itself nothing more than a clearing house for all foreign government (to include the U.S.) electronic computer based information.  WikiLeaks does not present political positons, commentary, or analysis of the information it obtains.  Governments, organizations and individuals who obtain information by way of hacking, private and public sources, through  intelligence collection methods, bribery, extortion, or other means — those sources tend to and want to remain anonyms and therefore go to WikiLeaks to get that information out and disseminate.  To that end, WikiLeaks is a dissemination site that has the means of accessing that information and then has the unique ability of being able to get mass amounts of information out, while at the same time protecting the sources of where they obtained the data and information.

News organizations, think tanks, and other media and political entities and parties  of the WikiLeaks information are the decision-makers and deciders of  what, where, and why the information they cull from the documents received from WikiLeaks is to be used, once it is in the public domain; be it for political purposes, candidate public exposure, and or “hit jobs” against public officials, or to expose corruption and wrong doing by a public officials and governments — that in itself is a decision of those organizations, solely, not WikiLeaks or the organization or individual that originally obtained that info or were the originators of it.

If Fox News, or any news bureau, or political organization uses WikiLeaks released information about Hillary Clinton’s emails to expose her corruption, that is that (those) media outlet(s) prerogative and intention – they strategize, craft, establish the angle, and position (spin) they intend to report about.  They will further use select reporters, special contributors, and subject matter experts to help to better convey the story behind the emails and documents, and their content.  If certain media outlets are in bed with the current administration, the Clinton campaign, or the Democrat Party — they will use and spin the WikiLeaks information differently than what is in the actual documents, emails or data, counter to what it states in black and white.  This is the most obvious if you read, listen or watch the main stream media reporting, such as; CBS, ABC, NBC/MSNBC, CNN, NYT, WaPo, LAT, etc., which ignore or claim the opposite of what the documents and emails actual imply or say in order to focus more on attacking Trump and Conservatives for bring up reporting from the actual WikiLeaks documents at all.

In turn, they will trash and deflect the reports and commentary because the Trump Campaign, Conservative Talk Radio, Conservative social media, and perhaps select programs on Fox News such as Hannity or Judge Jeanine Pirro are using the information to expose the depth and extent of corruption that has permeated the Executive Branch and its access and corroboration of the Obama administration and Clinton Campaign and the liberal mainstream media.  As it appears, based on the lefts reaction and commentary, they know they are being exposed, and as a result are in a desperate situation with the truth.  As a result, we have now witnessed by the Clinton, Democrat Party, and White House emails and corroboration with the MSM identifying the deliberate and intentionally planned violent attacks at Trump rallies, attempts to conduct voter fraud and the attacks in the last several days on Republican Headquarters in multiple states.  In turn, this suggests those mentioned and their own resort being to countering Trumps campaign efforts with slash and burn tactics and the “politics of personal destruction” strategy, certainly is a sign of desperation … on their part.

My guidance — stop buying into it, stop accepting it as gospel, stop repeating it.  Just because you are hearing from your favorite news source, social media site, polling site, or other fellow Republicans.  You are being used and coopted by the political left and their surrogates.  This is exactly how they defeated the Republican candidate in 2008 and 2012 by steering voters from the Republican candidate in the final weeks of the election campaign by conveying the message all is lost, that voters are changing their minds and going over to Hillary — despite being totally against everything Hillary stands for and represents.  As a reminder, their goal is a carefully orchestrated campaign to psychologically demoralize, create doubt and a defeatist mind-set and attitude in the minds of those supporting, or likely to vote for Donald Trump.  Again, don’t get caught in the malaise and PSYOP campaign being coopted and defeated.