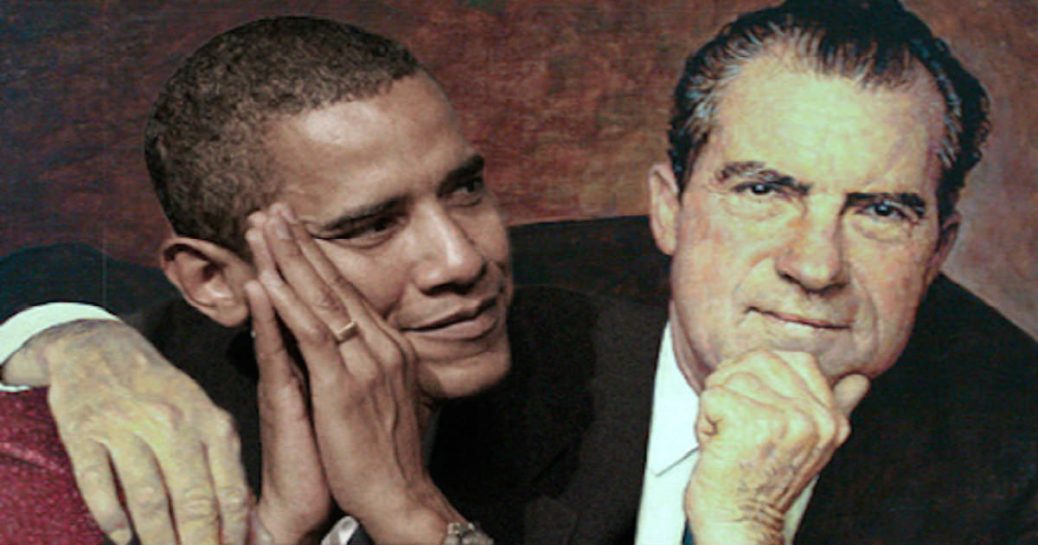 Russians altered the election or Obama spied on Trump?  Which sounds more likely?

With neither evidence nor an identifiable means to support their allegations that President Trump worked with the Russians to alter the outcome of the election liberals still believe him to be guilty.  Upon The Donald presenting allegations against Mr. Obama that the former president was wiretapping the Trump Campaign the Left says without proof of conviction the allegations are false.  Leftists provide a laugh a minute when it comes to their two-faced, self-righteous hypocrisy.  Without evidence they believe their allegations against President Trump make him guilty until proven innocent.  Since there is no possible way of proving something that did not happen they adhere to their belief that that is proof that it did.  But they are more than ready to dismiss allegations against Mr. Obama despite the proof they themselves provided.

When Mark Levin and others examined leftwing sources, supplied by leaks coming out of Washington from Obama operatives, they found that Obama used the Foreign Intelligence Surveillance Act to justify spying on Donald Trump.  Obama acted on the basis of the false accusations that Trump was in contact with Putin to hack the Hillary Campaign and alter the outcome of the election.  In spying on the Trump Campaign they believe he did nothing illegal.  Obama’s actions were not only illegal, but downright Nixonian.  Just like leftist’s belief in global warming and evolution as facts, despite proof of fraud in the former and complete lack of evidence of the latter, they believe Mr. Obama is innocent regardless of proof and President Trump is guilty just on the basis of allegations.  It is the dysfunctional psychotic logic of backwards liberals thinking.

The Left believes man-made climate change is a fact despite all the evidence proving it is a natural occurrence over which mankind has no control or influence, but is in fact a government scam to milk taxpayers of their wealth.  Likewise, they believe evolution is a scientific truth despite the fact that it is a theory developed from a few observable facts, but not even close to being possible to prove as a scientific reality.  Yet here they are again between Trump and Obama accusing Trump of colluding with the Russians to alter the election and no facts with which to back up their claim, yet they dismiss the evidence they themselves provided that Obama was illegally spying on Trump under the guise of investigating that claim.  In their efforts to prove their lie that Trump and Putin altered the election the Left has hoist themselves on their own petard by revealing that Obama was spying on Trump.

This is just like Democrats claiming voter fraud doesn’t exist, then accusing Trump of voter fraud, and then screaming maniacally when Trump says he’s going to investigate voter fraud that Democrats say doesn’t exist.  Jill Stein’s recount in Michigan already proved that Democrats cast fraudulent ballots in an effort to give Hillary the state.  Similar recounts in other states proved more of the same.  That the Left is accusing Republicans of voter fraud that they themselves commit in extremis, yet are demanding an investigation only into Republican voter fraud, is to laugh!  Leftist liberals always jump to conclusions based on their opinions rather than the facts, and then work backwards to manufacture a cause rather than examine the evidence to establish a conclusion.  Their logic is a poison of the mind that eats away at intelligence because they are not emotionally equipped to deal with reality.  They believe they can commit crimes without being caught and blame others as being guilty.  This is another case of liberalism poisoning the well and then challenging others to drink the Kool Aid of their empty logic.  Let them drink their own poison and choke on it!

America needs to require voter ID with thumbprint verification on paper ballots rather than vague electronic registers.  And President Trump needs to do a complete investigation into Mr. Obama and his operatives leaking, sabotaging, and illegally wiretapping the Trump Campaign all the way up to his entry into the White House.  Leftists have been rioting, community agitating in Town Halls, and violating American laws including assisting illegal immigrants, criminals, and potential jihadi terrorists for the past decade.  Their efforts to undermine the Constitution have been going on from the beginning, gained muscle with Wilson creating a national bank, and have been on steroids under a racist Moslem that Democrats passed off onto the people as hope and change of stopping corruption in Washington, but instead worked to cement it.  Now that Americans have chosen a man who will reverse all they have done to steal America away from the people they are pulling out all the stops, committing every crime from lying to murder, in order to stop him and retake their power.  They say this charge by Trump is to divert attention from his guilt of colluding with Putin, but they cannot present any means by which Russia altered the election aside from claiming they gave Podesta’s emails to WikiLeaks to which next to no one paid attention.  They refuse to reveal their sources claiming it is their right, but demand Trump reveal his.  They call for investigations of voter fraud until the investigation turns towards them.  It is high time that those who love America follow Trump in putting aside leftwing slanders and false allegations to crush those who hate America and send them packing!

CIA give President Trump the names of leakers of classified information

Liberals Using Fake News to Corrupt the Next American Generation!