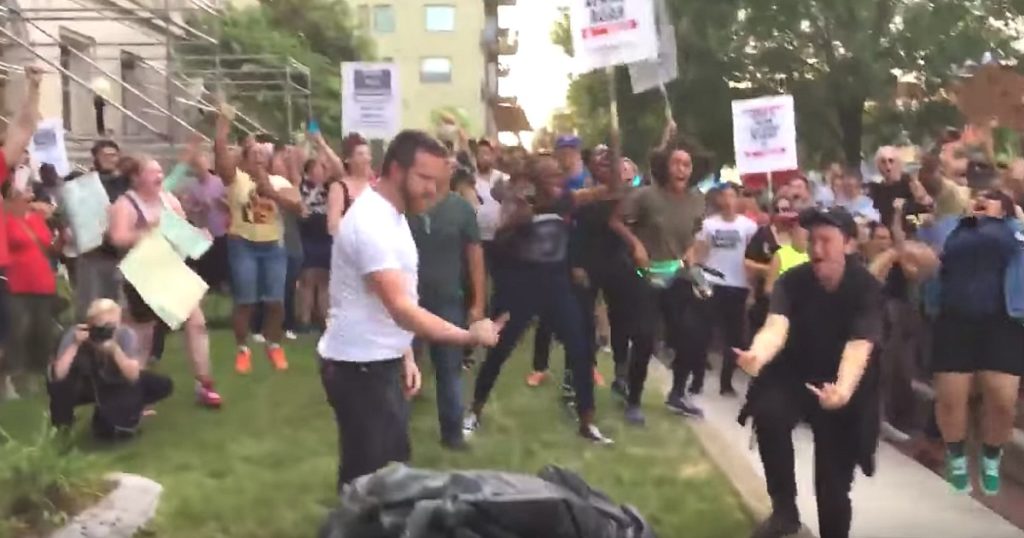 As the president pointed out in his latest press conference, the original group that was protesting the removal of the Robert E.

Lee statue actually had a permit to assemble and did so peacefully. The leftist/Marxist radicals did not obtain a permit.

Now I don’t care who you are. If you assemble peacefully and conduct yourself accordingly – you can be Communist/Marxist radicals or fascist skin head, neo-Nazis. Who cares. But when you cross the line and descend into violence, it should matter who you are.

As Tucker Carlson pointed out on his Tuesday evening Fox News program, it evidently it does matter who you are, or with what wacko group you belong.

Many of us witnessed the outrageous behavior in Durham, NC, of the black lady climbing a ladder to place a lanyard around a Civil War soldier’s memorial. The crowd had no permit, no permission to even be there, much less the authority to pull down the statue, however offensive they all of the sudden thought it to be.

I say all of the sudden, because a lot of these statues have been on display for a century or so, and no one said boo. Not blacks or whites – left or right. Now we’re expected to believe that a mass consciousness awakening has spontaneously occurred like so many newborn puppies opening their eyes for the first time.

Bull Crap! And may I add – what if she would have fallen? We all know exactly what would have happened. She would have sued the city of Durham and won.

Just where were the cops during this lawless display? I’ll tell you where they were. They were somewhere nearby, sitting on their hands because they were ordered to by leftist local politicians, who are either as radical as the hell-raisers who tore down the statue, but don’t dare reveal themselves – or too cowardly to act against them.

Van Jones has been oft quoted as saying, “I’m willing to forgo the cheap satisfaction of the radical pose for the deep satisfaction of radical ends.” This could be the leftist politician’s creed, for it seems the left political class is the last bastion of covert Marxism.

The mask has come off virtually everyone else – from the ex-hippie turned grandparent, to the ignorant, idealistic student, to the long-tenured University professor. All have succumbed to allure of the revolution. Yet the political class still puts on airs to hide their radicalism – or again, is too cowardly to speak out.

Oh, we catch glimpses of Marxism in times of weakness and irrationality. Just watch most speeches by Maxine Waters. But for the most part, leftist politicians have done a decent job at keeping their most vile views under wraps – but only relative to their constituents.

In years gone by, leftist politicians felt they had to hit the streets, give speeches and go to rallies to whip up a crowd. Not anymore. The crowd has passed them by. The Marxist ideal of shutting down and destroying anything and everything that offends the movement has developed a life of its own.

This rudderless ship no longer needs political leadership, except for the ones capable of holding the authorities at bay. The movement is feeding on its own energy. And liberal politicians had better be aware of the monster they have helped create. There may come a day when the crowd realizes that they no longer need you either – or that the John Lewis’ and Maxine Waters’ of the nation just aren’t radical enough. Then the mob will consume them.

I agree with president Trump, that enough will never be enough for this rabble. They will become like the Palestinian terrorists. No matter what Israel offers them for the sake of peace, or how much land they are willing to vacate, it is never enough for the lying Palestinian leadership.

In the Batman movie, The Dark Knight, Alfred is talking to Bruce Wayne about the Joker. Alfred says to Bruce: “Perhaps this is a man you don’t fully understand… Some men aren’t looking for anything logical. Some men can’t be bought, bullied, reasoned or negotiated with. Some men just want to watch the world burn.”