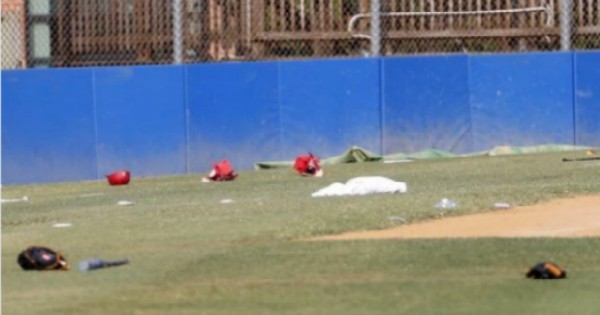 Insane Democrat ideology accomplishes its goal of inciting extreme violence as a Sanders supporter goes ballistic and attempts to assassinate Republicans.  CNN has gone quiet today because they know they are complicit.

Firstly, I always form my opinions and write my articles before listening to Rush Limbaugh to learn more details so I listen to him the next day.  He actually predicted this just the day before!  Of course, it’s not like it isn’t obvious this has been coming for months.  Leftists love to say that rightwingers “get their marching orders from Rush,” which is the pinnacle of lies.  People listen to the pundits who express their own opinions.  Only liberals believe that pundits actually shape opinion, which is not surprising as the leftwing propaganda machine shoves terabytes of misinformation and dysfunctional thinking in their faces that they consume like candy.  Rightwing good sense is so rare that for these human sponges to believe it is the Right that is being misled would be hilarious were it not for events like this.  There is a fine line between being informed and being indoctrinated that liberals cannot see because they were not taught morality or critical thinking.  Yet they believe they are intelligent, logical, informed free thinkers until they are confronted by righteous logic which leaves them apoplectic and fit to be tied lest they start killing people.  oh, wait…

The shooter was no loon like the one that shot Gabriel Gifford and the Left blamed on Sarah Palin, or like the one that shot up the movie theater in Colorado that they blamed on the TEA Party.  He was a typical leftist liberal Democrat who believes the government (i.e. taxpayers) should pay for his healthcare and he has been told that Trump will deny him any healthcare.  So liberal loons say this shooting was justified as “self-defense.”  This is the psychotic, dysfunctional thinking of liberals.  No one is denying anyone healthcare, but that’s what Democrats say Republicans are doing.  Then, of course, they immediately call for gun control after one of their own goes on a shooting spree – just as all of these shooters and terrorists have been leftists trying to terrorize people into submitting to their control.

I agree we should take all guns away – FROM DEMOCRATS as they are the only ones committing crimes and acts of terror with guns.  After that we’ll go after all the Democrats committing crimes with other weapons.  Does anyone wonder why the prisons are filled with Democrats?  The Left always advocates for violence, terrorism, and totalitarian government.  It is only when the Right acts to stop their criminal behavior that they cry ‘oppression!’  This is why young people must be educated about right and wrong so they are not misguided and make prison a revolving door daycare as has been done over the last fifty years.  Civilization is judged by how we treat the weakest among us, not how we treat the worst among us!  America is letting the predators and scavengers prey on the weak and making the strong pay and provide for them.  IT’S TIME TO STOP PANDERING TO DEMOCRATS AND MAKE THEM OBEY THE LAW!  People often say over silly things, “There ought to be a law.”  Well there are laws against violence and there are laws against inciting violence, but the legal system has been so corrupted that no one is being prosecuted for these crimes.  Instead America is treated to daily doses of leftist conspiracy theories, hate, and fantasy dangers like climate change.  What will it take, America?

Pray for faith, pray for justice

Follow-up: Instead of their usual Trump Derangement Syndrome, CNN today is promoting unity and Republicans coming together with Democrats and even showing Democrats praying on the baseball field where they practice.  Isn’t it curious how that happens?  The FBI, still heavily under Democrat control, says they don’t know what the shooters motives were despite mountains of evidence he hates Republicans and inquired before he started shooting which party was using which field.  So will this leftwing terrorist propaganda have the desired effect that Democrats want or must they be more extreme and really rack up a body count?  They keep saying they should line Republicans up against the wall and shoot them to save the lives of their constituents.  Democrats have been using the legal system to persecute Americans for their Christian conservative culture.  What will it take before President Trump and the Republicans take action against all of these Democrats inciting hate and promoting violence?  Our courts are not Democrat playgrounds and the Supreme Court has not yet been corrupted beyond redemption.  Obama, Hillary, Reid, Pelosi, and all these Democrats and their pundits need a good dose of America justice!

For people who suffer from a lack of critical thinking and functional logic I’ll make it simple.  When an event like this takes place a righteous person listens to the arguments from both sides and examines the event.  In this case the Democrats are saying it’s Rush Limbaugh’s fault for what he says and Trump’s fault for this guy shooting people, while Republicans are saying it’s Democrats propaganda’s fault.  The event is a Democrat who became so incensed he decided to try to murder Republican congressmen.  The Left is trying to censor that information so their argument prevails, but that information is already out there so they also say they condemn violence and pray in public, which they never do.  Critical thinking is listening to both sides of an argument and examining the actions that take place before reaching a conclusion, which in this case is without question that the Left is guilty and the Right is innocent – except in the minds of deluded leftists who lack a moral compass.

Explaining the dysfunctional thinking of the neurotic liberal mind