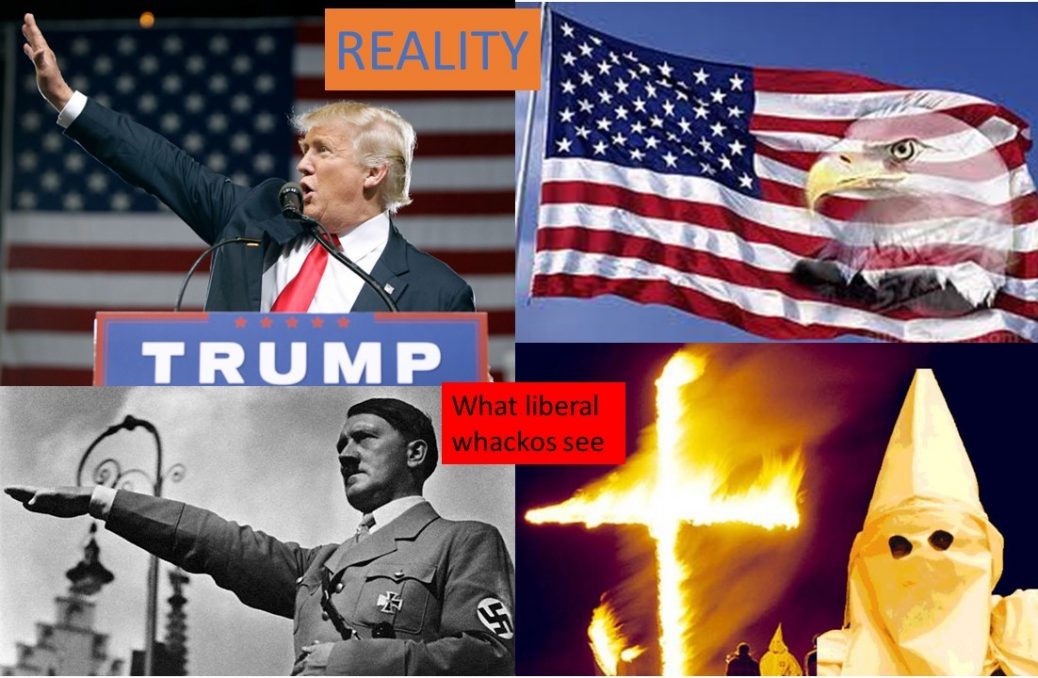 “This president has radicalized so many more people than ISIS ever did.” – Julia Ioffe, GQ magazine

All leftist media outlets parroted this from CNN’s Wolf Blitzer to leftwing bloggers.  This has got to be the most heinous of lies ever told in media.  The deception in this statement is akin to declaring Christianity to be Nazism while declaring the Nazis to be saints.  As Antifa and BLM rampage across the country rioting and murdering, as Democrats call for their zealots to attack Republicans, leftists are saying we are not seeing what we are seeing.  They are claiming that it is Trump calling for violence and Republicans carrying it out.

Leftists are claiming that Democrats are the peaceful ones calling for civility the day after they are on television calling for inciting coercion through violence and “incivility.”  This is the same as declaring that “Islam is peace” as jihadis murder thousands of people.  This gaslighting of the American people is an attempt to deceive them of the true evil in America.  It is a crime against humanity, righteousness, and God.  Like all leftist lies in the media, they throw this claim out there that Trump is the radical to implant their lies in the minds of the unwary and then retract them quietly in the darkness.

“Gaslighting – (verb) to manipulate (someone) by psychological means into questioning their own sanity.”

Saying Republicans are radicalized is how Democrats deflect from their own fanatical haters.  Radicalization is the term used by some to describe Islamic Jihad.  The fact that jihadis are extremely violent is not radical Islam, but straight from the teachings of Muhammad.  With madmen sending mail bombs and conducting mass shootings, leftists keep saying it is Trump’s fault when his supporters are the victims.  Democrats say they will “lower the temperature of political discourse” and be more “civil” when they win back control of the government.  If they lose they say, “There will be blood.”  So which party has become the party of radicals?

Is the media gaslighting us?

This is the essence of leftism.  Deny the truth, promote the lie, dupe the ignorant, and deceive the righteous.  This is why I say liberalism is born of ignorance and bred on immorality.  There is no moral righteousness is deception.  The only time the morally righteous practice deception is in protecting themselves against the physical attacks by evil people.  The only deception acceptable in Christianity is in a just war protecting the innocent from the pillages of invaders.

The leftwing media is endeavoring to convince people that they have not been seeing Antifa and BLM riots, murders of police, attempted assassinations of Republicans, or heard Democrats from Obama and Hillary on down calling them to commit acts of violence against Republicans by justifying their cause as if they are the ones fighting evil.  Only evil fighting against God, truth, and righteousness can call itself good.  Only evil will declare that God is on their side rather than pray that they are on God’s side.  That’s because they themselves do not recognize the authority of God.  They scorn Him and His Son.

Rush Limbaugh’s labeling of the leftwing as the “Drive-by Media” is a perfect analogy of how they operate.  They roll through and shoot up the place with false accusations and drive on to the next target.  They never have to explain or inform the people of all the facts.  They simply create havoc with their phony narratives, and by the time the righteous have cleared up the scene of the last shooting to begin to expose them, they have driven on to the next shooting.  The events of the last month are a perfect example of how the drive-by media sprays destruction all over the place and moves on from site to site.

When Eric Holder says, “When they go low we kick ‘em,” what constitutes Republicans “going low?”  By their definition, Republicans go low when they expose liberal lies.  Trump is an open book in his policies and opinions blasted all over Twitter.  Leftists say Trump tells nothing but lies.  That’s because everything he says is contrary to what they say and everything they say about him and Republicans are proven lies.  That’s why they are forced to constantly print retractions of their false allegations, but they always do so in the back pages so that their lies remain in the forefront of the news.  Democrats hate Trump, not because he is exhorting violence, but because he is exposing their lies calling for violence.

How do people process the leftist lies that Republicans are the party of racism, hate, xenophobia, and violence when those are all the characteristics of Democrats?  How do people weigh their words when they say they are fighting fascism while using fascism to attack free speech?  The simpletons in the public merely accept what they say on its face without question.  Most people don’t remember yesterday let alone six months or ten years ago.  But many Republicans remember, and we immediately see when Democrats are lying trying to rewrite history.  That’s why the Republican symbol is the elephant that never forgets, while the Democrat’s symbol is the ass that is too stubborn to learn.

It is an unfortunate fact that half the population falls into the category of lacking memory remaining oblivious.  Whether it is because they are that forgetful, that gullible, or that their hearts are so twisted with hateful darkness that they want to believe the lies the left tells them, like the Russian collusion election hacking fraud, global warming, or Antifa fighting fascism, such anti-Americanism cannot be the rulers of this nation.  Democrats now represent every America hating, anti-Constitutional, anti-Christian group in the world and they want to bring them all into America to overwhelm the citizens to give them the power to make everyone their subjects.

That they also believe the man-made global warming scam, however, points more toward their being gullible fools easily duped.  That blindness is what Republicans have to overcome in order to defeat the machinations of the left.  Americans have become the most uneducated, immoral anarchists of the world because liberals have taken over the education system and corrupted it to indoctrinate young skulls full of mush into their ideology rather than educating them to the truth of the evils of socialism, atheism, and all leftist cults.

Leftists endeavor to set the board as they wish, make the definitions, and drive the agenda.  Communists call themselves liberals to disguise their true nature.  They conflate illegal aliens with legal immigrants to confuse the issue.  They call their bogus global warming religion “climate science” to dupe the uneducated.  They declare the party of liberty and law to be the party of Nazi racist oppression for combatting Democrat criminals.  The left is the party of slavery, bigotry, and deception and it requires a moral heart and educated mind to recognize them for what they are.

Democrats want to be in power so that they control America’s wealth.  “It’s for your own good so you don’t destroy yourselves with global warming.”  “Socialism is beneficial when the right people are in charge” (like Obama).  “Listen to Democrats because they work only for the common good.”  “Hillary and Obama never lie and are the most brilliant people on the planet.”  “They only do good and everything Trump has done is evil that will destroy the country and all life on Earth.”  How these young fools cannot see through this insanity is beyond reason, which is why they must not be allowed to regain power but must be defeated lest they bring about America’s fall.

There is no Leftist Media Bias!

The Immigrant Crisis is a Creation of the Democrats